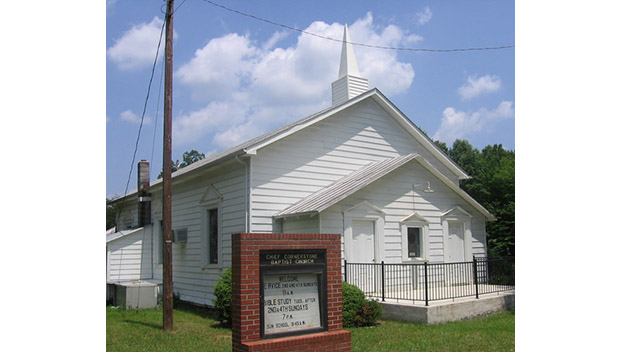 In a December press release The Virginia Department of Historic Resources announced the approval of 14 new historical markers, among them is Chief Cornerstone Baptist Church of Buckingham County.

According to the release it can take upward of three months or more before a new marker is ready for installation and the cost of manufacturing the sign is covered by the markers sponsor.

The full text of the historical markers is below:

African Americans had established Chief Cornerstone Baptist Church by 1876, during a period when many Black southerners worked to build independent community institutions in the wake of Emancipation. John and Harriet Gregory, who had formerly been enslaved, sold a half-acre of their property to the church’s trustees. Members worshiped under a brush arbor, an open-sided shelter with a brush roof and a mound of earth serving as a lectern, before building a log sanctuary. The church’s cemetery is the final resting place of many community members, including veterans of World War I, World War II, and the Korean War.

Samuel Kelso, born into slavery, became one of Lynchburg’s first African American teachers after the Civil War. He taught at a freedmen’s school on 12th Street and was later a trustee of the all-Black Polk Street School. Kelso was elected to represent Campbell County, including Lynchburg, at Virginia’s Constitutional Convention of 1867-68. There he voted with radical reformers and introduced a resolution calling for free public education open to all on an equal basis. In 1869 he was a delegate to the National Convention of the Colored Men of America, which protested the exclusion of Black Americans from civil rights guaranteed by the U.S. Constitution. He was later a postal agent in Lynchburg.

Soon after the Civil War, the Rev. Robert Hughes (1821-1895) and other freedmen organized Union Branch Baptist Church, later known as Union Run Baptist Church. Spiritual life was vital to formerly enslaved African Americans, and establishing churches and creating communities were of primary importance. Thomas Jefferson Randolph of Edgehill deeded one acre to the church’s deacons in 1867. The congregation purchased the Limestone Church building and re-erected it on this site, where it also served as a school. The church became a cornerstone of the community. The Rev. Hughes, pastor for three decades, was interred in the churchyard, the final resting place of hundreds of community members.

This ornate Queen Anne-style house was built in 1897 for William H. Trusty (1862-1902). Trusty, born in Prince George County, moved with his family to this area ca. 1871, joining a large community of emancipated African Americans seeking new opportunities. Trusty became an entrepreneur, an owner of commercial and residential real estate in Phoebus, and a civic leader. In 1901 he was elected to the Phoebus town council in the municipality’s first election after its incorporation. After Trusty’s death, his widow, Elberia Trusty, lived here until she died in 1940. The house, a reflection of Black achievement in the post-Emancipation years, is listed on the National Register of Historic Places.

Here in 1949, six all-white, all-male juries convicted seven black men of the rape of a white woman. All seven men were sentenced to death. On appeal, NAACP attorneys submitted the first petition to the U.S. Supreme Court arguing that capital punishment had been disproportionately applied against African Americans in violation of the 14th Amendment. Despite international attention and petitions for clemency, the Commonwealth of Virginia executed the men in Feb. 1951, the most executions for a rape in U.S. history. In 1977, the Supreme Court ruled that execution for rape was cruel and unusual punishment. Gov. Ralph Northam issued posthumous pardons to the Martinsville Seven on 31 Aug. 2021.

Norvel Lee was born in Botetourt County and grew up two miles northeast of here. He joined the Army Air Forces in 1943, was trained in Tuskegee, AL, and later retired from the Air Force Reserve as a lieutenant colonel. In 1948, Lee was arrested in Covington for refusing to leave the whites-only section of a train car. The Virginia Supreme Court of Appeals reversed his conviction in 1949 on the grounds that the state could not enforce segregation laws on a local train if the passenger held a ticket for interstate travel. In 1952, Lee earned an Olympic gold medal in boxing in Helsinki, Finland. A graduate of Howard University, he was later a corrections officer and educator in Washington, D.C.

East End High School opened near this location in Sept. 1953 to serve African American students during the segregation era. Mecklenburg County built the school with a grant from the Battle Fund, established under Gov. John S. Battle as Virginia’s first program for providing direct aid to localities for school construction. Students came from Mecklenburg County Training School, the Thyne Institute, and other schools in the eastern portion of the county. E. N. Taliaferro was East End’s only principal. The last class graduated on 5 June 1969. Mecklenburg County schools were fully desegregated that fall under a federal court order, and the building became a junior high.

Two miles northeast on the Rappahannock River, at Coleman’s Town, George Southern was operating a ferry by 1679. In the early 1700s, the Ley and Layton families ran the ferry, an ordinary, and a wharf. By midcentury, the community had become a hub of commerce featuring a public tobacco warehouse, from which tobacco was inspected and shipped to Great Britain, and a Scottish merchant’s store. George Washington used the ferry several times in the 1750s and 60s. An effort to develop a town called Beaufort here ca. 1770 failed when the tobacco trade declined after the Revolutionary War. Layton’s Wharf was a stop on the Baltimore to Fredericksburg steamboat route from the 1830s until 1937.

One mile north, on the Rappahannock River, is Saunders’s Wharf, a center of transportation and commerce from the mid-1800s until 1937. Steamboats on the busy route that linked Fredericksburg and Baltimore picked up crops, livestock, raw materials, and passengers here and deposited manufactured goods. John Saunders (d. 1867), a farmer and merchant who owned a store in nearby Loretto, built the wharf on his estate, later known as Wheatland. Saunders’s Wharf was one of several steamboat landings in Essex County. Others included Port Micou, Layton’s, Blandfield, Tappahannock, Ware’s, and Bowler’s. The construction of highways led to the river’s decline as a major avenue of trade.

Rapidan Baptist Church, formed by Elijah Craig, James Reed, Samuel Harriss, and John Waller, was constituted on 14 Jan. 1773. Members of this congregation, like other Dissenters, faced prosecution for refusing to comply with laws that privileged the Church of England, Virginia’s established church. Craig was arrested while preaching, as were the other Rapidan organizers, and he continued to preach while jailed in Culpeper. James Madison won the support of many local Baptists in his 1789 campaign for the U.S. House of Representatives after assuring George Eve, Rapidan’s pastor, that he would support a constitutional amendment guaranteeing religious freedom.

Lynchburg resident Carl Cato, a nationally recognized rosarian, was best known for collecting antique roses and saving them from extinction. He was a founder of the Heritage Roses Group, a nationwide organization, and was an editor of its news magazine. Cato identified several heirloom roses once believed to be lost, including Cato’s Cluster and the spineless chestnut rose. He saved other rare roses by sending specimen cuttings to gardens across the U.S., including the National Arboretum in Washington, D.C., and the Huntington Botanical Gardens in CA. Cato helped establish the acclaimed collection of antique roses in Lynchburg’s Old City Cemetery, which features hundreds of varieties.

John C. Underwood, an attorney from New York, settled near here early in the 1850s. Harassed for his antislavery activism and his work on behalf of the Republican Party, he left Virginia in 1856. Pres. Abraham Lincoln appointed him a federal judge for Virginia’s eastern district in 1863. An outspoken advocate of equal rights for African Americans after the Civil War, Underwood was elected president of Virginia’s Constitutional Convention of 1867–68. Among the convention’s 105 members were 24 African Americans. The “Underwood Constitution,” ratified in 1869, granted Black men the right to vote, established a system of free public schools, and secured other democratic reforms.

The United Order of Tents of J.R. Giddings and Jollifee Union, founded by and for African American women, emerged from efforts to aid enslaved people who sought freedom along the Underground Railroad. Annetta M. Lane and Harriet R. Taylor, who had both been enslaved, formally organized the Tents’ Southern District #1 in Norfolk shortly after the Civil War. A Christian mutual aid society, the Tents provided financial assistance and burial insurance, established nursing homes, sponsored scholarships, supported civil rights activists, and aided mission work abroad. National membership grew to about 50,000 in the 20th century. This property became the headquarters of Southern District #1 in 1913.

In 1965, Paul E. Sullivan rented one of his two nearby homes to Theodore R. Freeman Jr. When Sullivan attempted to transfer a pool membership to the Freeman family, the board of Little Hunting Park denied the request as the Freemans were Black. They also terminated the Sullivans’ membership for protesting. Both families filed a lawsuit in 1966 and pursued the case through several appeals. In Dec. 1969, the U.S. Supreme Court ruled in Sullivan v. Little Hunting Park, Inc., that the exclusion of an African American family from membership in a community recreational association constituted illegal housing discrimination. The case led to the desegregation of neighborhood clubs across the U.S.