A year ago, when 2021 was brand new, I set myself a challenge. I planned to read through the dictionary in a year. An inspiration may have been A. J. Jacobs, who chronicled the experience of reading the Encyclopaedia Britannica in his book, The Know-It-All. Jacobs claims to have completed the journey from A to Z in 18 months.

I knew better than to select my copy of Webster’s Third New International Dictionary, Unabridged. It runs 2,622 pages, and that felt a bit daunting. Instead, I settled on Merriam-Webster’s Collegiate Dictionary, Eleventh Edition, a dictionary I’ve long used as my preferred authority on how to spell troublesome words.

Its size felt manageable. Excluding appendices with biographical names and geographical places, the Collegiate Dictionary contains 1,459 pages of definitions. I did the math. If I could read just five pages a day, the project would take fewer than 300 days, a pace that provided for plenty of days off. When I sit down with a novel, I can knock out 50 or even 100 pages in an evening, so a mere five pages seemed a small task.

How did I do? Here at the beginning of 2022, I’m about three-quarters of the way through the letter C.

My slow progress is not due to lack of persistence. It turns out that our English vocabulary is weighted toward the front of the alphabet. A, B, and, C may represent only 11% of the alphabet’s 26 letters, but they comprise 20% of my dictionary’s pages of definitions. Additionally, the dictionary proved to be a fascinating book. Although it doesn’t contain a traditional plot, individual words tell astonishing stories. I discovered the joy of exploring them and investigating their relationships with other words.

I lingered over an unexpected connection between the verb abide and the noun abode, a place where abiding can happen. I paused to wonder whether a person preparing to ascend to the rank of admiral needed to be admirable. I learned that aftermath originated as an agricultural term. It referred to what happened after mowing. It had nothing to do with the consequences of mathematical calculations.

One of my favorite words is one of the simplest: bay. Yes, it’s a body of water. In my mind’s eye, I can see the Chesapeake Bay. You probably can, too. But the word also means many other things. Some of them are metaphorically similar. A compartment (such as a cargo bay), a bowed window (bay window), a part of a building (mechanics bay), or a supporting structure for equipment (electronics bay). Other definitions are completely different. A reddish-brown shade or a horse of that color. A type of bark, as in what dogs may do when viewing the moon. A checked or blocked position, as when some device or force is used to keep the crowd at bay. And, if you’ve done much cooking, you’ve probably used bay leaves (from a type of laurel plant). Apparently, several words that predate modern English intermingled across the centuries to bestow this rich assortment of meanings on today’s modest three-letter word.

Although I expected many words to carry multiple meanings, I was shocked to discover some had definitions that seemed in conflict with one another. For example, artless can mean uncultured or crude, as in an artless brute. It can also mean free from guile, as in an artless grace. Or asperse. It can mean to sprinkle with holy water, but it can also mean to attack with evil reports. A cashier is someone responsible for receiving money. With a slight change in pronunciation, the word means to dismiss dishonorably.

There have been many other surprises. From reading J.R.R. Tolkien’s tales, I knew Bilbo was a Hobbit. I did not know that a bilbo is an iron bar used to secure the feet of prisoners. I would have guessed that campanology involved the study of camps. But no. It refers to the art of bell ringing. And, the difference between a caribou and a reindeer? Biologically, none.

If I can maintain my current pace, I should be able to finish my dictionary project in four or five years. I’ll keep you posted.

KAREN BELLENIR has been writing for The Farmville Herald since 2009. Her book, Happy to Be Here: A Transplant Takes Root in Farmville, Virginia features a compilation of her columns. It is available from PierPress.com. You can contact Karen at kbellenir@PierPress.com.

More Happy To Be Here

Happy to be here — Observing with both eyes 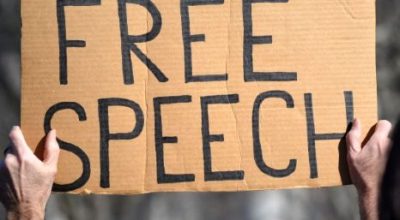 Happy To Be Here: Let’s talk about freedom of speech

Happy to be here — Standing on new shores