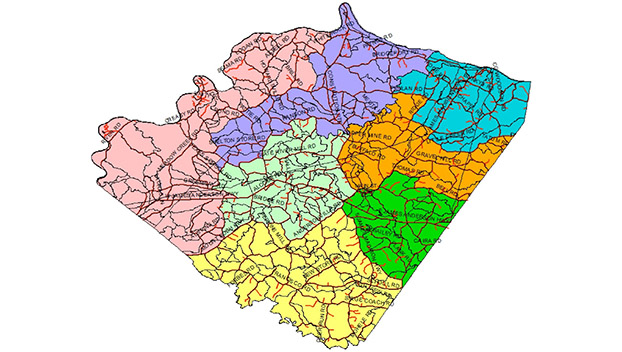 Buckingham County Board of Supervisors voted to approve the redrawing of the voting districts for the county.

The Buckingham Board of Supervisors voted Monday, Dec. 13, to approve a redistricting ordinance change following the 2020 U.S. Census results.

During the meeting, County Administrator Karl Carter gave a presentation to the board highlighting that redistricting occurs every 10 years following the U.S. Census. It is the responsibility of state and local governments to redraw the boundaries of districts that elect representatives, including the Board of Supervisors.

In order to redraw voting district lines, the Board established a redistricting committee comprised of each supervisor, the chairmen/presidents of the county’s Democratic and Republican parties, the leader of the local NAACP, the chair/president of the Buckingham Voters’ League, the chairman of the School Board and the county registrar.

Carter noted the biggest change to this year’s U.S. Census means the county no longer counts the local prison populations in the overall population count for the county, as inmates are now counted toward the population of their home counties and not the county the prison is located in.

Based on the adjusted population figures, the county’s ideal district number, meaning the amount of people living in each district should all seven districts be perfectly equal, was 2,212.

The committee redrew the county’s districts under numerous guidelines, including preventing any district from having a population of 5% more or 5% less than the ideal district number of 2,212.

After working to draw new voting district lines, the committee proposed a final set of numbers to the board.

Through the new design, population counts in each district of the county would be as follows:

On Tuesday, Carter highlighted the newly drawn districts mean a change in voting location for District 2. Voters in the 2nd District will now vote at the Buckingham Community Center instead of the Dillwyn Rescue Squad.

The board, with the exception of District 1 Supervisor Dennis Davis who was absent, unanimously approved the redrawing of the districts. The changes will go into effect May 1 2022.

Carter expressed his approval of the committee’s work.

“We did this in house and did not outsource,” he said. “So I want to thank everyone that worked very hard on this and making it happen. When you are shifting census blocks around but still trying to stay in the parameters that were set, it can be difficult.”