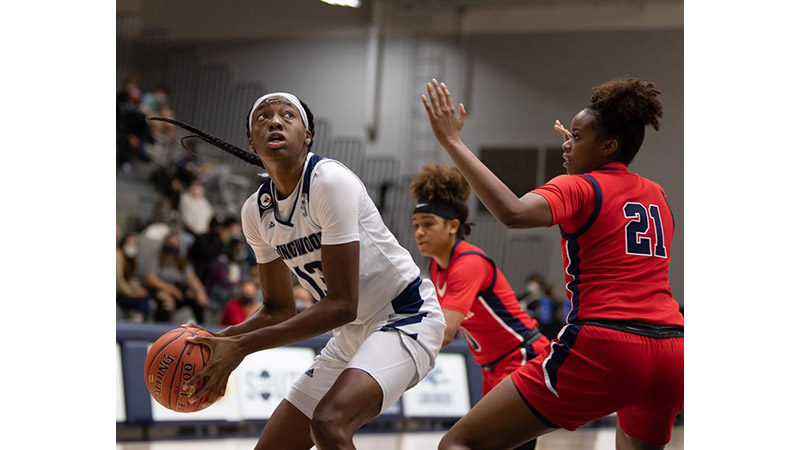 Akila Smith scored 15 points in the game with 9 of them being in the fourth quarter. (Photo courtesy of Keith Lucas)

Road wins are earned by a full team effort, and Longwood women’s basketball now has a pair of them two games into a six-game road swing. A bevy of players made game-changing plays, and the Lancers took down Lamar 62-59 in a back-and-forth game that went down to the wire on Sunday Nov. 28.

While everyone in the lineup contributed in a big way, Akila Smith left her mark in the fourth quarter. The senior forward poured in nine of her 15 points to help Longwood erase a seven-point deficit and earn their third straight win. The defense was equally as ferocious, as the Lancers limited to Lamar to one made shot in the final 6:34 to close the game on a 13-3 run.

“It was a great team win, and I’m really proud of our team and our staff, because I thought we executed very well,” said Smith. “Our mind set was, we can still win it, we can still get it, and we can still get the stop. That’s our mentality, and today, we made sure we got that into everyone including our bench. We’ve come a long way since I was a freshman with our mentality, so we’re definitely moving up.”

The Lancer offense was in attack mode, scoring 38 points in the paint behind three players in double figures. In addition to Smith, Kyla McMakin had a team-best 17 points and six rebounds, her third straight game in double figures. Anne-Hamilton LeRoy hit double digits for the first time this season, as the junior chipped in 12 points off the bench.

“So many players made big plays,” said Head Coach Rebecca Tillett. “As a coach, with veteran teams, you feel really good going into those late stretches of the game. You have confidence in them, and I can look into their eyes in the huddles and they are ready for the next instruction.”

Meanwhile, the Lancer defense proved to be a tough nut to crack. The team forced 19 turnovers while garner 10 steals. That pressure led to 21 points off turnovers and was enough to offset three double-digit scorers for Lamar. Akasha Davis notched a game-high 18 points to go with 14 rebounds, and Sabria Dean and Malay McQueen each added 13 points apiece in a thrilling game that saw 16 lead changes and seven ties.

McMakin came out firing, pouring in 12 first-half points to give Longwood the lead after 20 minutes of basketball. However, Lamar responded with a 19-point third quarter, the team’s best of the game, to take the lead headed into the fourth.

The Cardinals extended the advantage over the first three-and-a-half minutes of the fourth, but Smith and freshman guard Kennedy Calhoun jumpstarted the game-ending run. Smith hit three shots in a three-minute span, the last to tie it, and Calhoun added a steal, a layup and an assists. Calhoun had six points, four rebounds and a career-best four steals.

Davis answered with a layup for Lamar, but Akila Smith gave Longwood the lead for good with a layup with 2:37 to play, 60-59. From that point on, the Lancer defense did the dirty work. Graduate student point guard Tra’Dayja Smith helped ice the game with a pair of free throws, as the Texas native stuffed the stat sheet with eight points, three rebounds, five assists and two steals while also going 6-6 at the free throw line in front of her family.

“Tra’Dayja’s leadership in the late moments of the games is incredible,” said Tillett.”Obviously to bring her home is something we’ve all wanted to do, so for us to do this in front of so many of her family and friends, and then to get the win on a stop. We’ve been talking about how much our defense needs to improve, and here we go, we get a win on the last few possessions on defense.”

“We’re in Texas, and a lot of my friends and family came out, and to get the win in front of them was great,” said Tra’Dayja Smith. “I want to thank Longwood for getting us some games in Texas so my family could come out and see us play. To have them come out, and with Madison coming and showing out, and supporting us – I just want to thank everybody.”

The Lancers are in the midst of a six-game road swing, and they will stay in Texas for a quick turnaround. Longwood heads to Hunstville to take on Sam Houston on Tuesday, Nov. 30. Tip off is set for 7:30 p.m. Eastern Time.