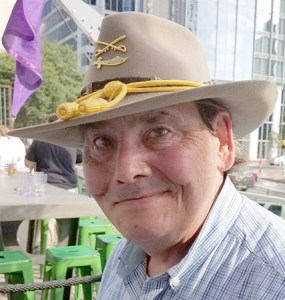 Paul retired from the U.S. Navy in 1998 after 17 years of distinguished service at various duty stations and several Indian Ocean and Mediterranean cruises. He was also a proud veteran of Operations Desert Shield and Desert Storm. After retirement from the Navy, Paul began a second career as a Sr. Data Network Technician for Black Box Corporation in Richmond. He was a member of the Cowboy Fast Draw Association and enjoyed competing in local events. He also enjoyed hunting and fishing with his father and brothers, visiting vineyards with his wife and travelling with his family. Paul was a loving husband, son, brother, father and grandfather. His sudden passing leaves a deep void in all our lives.

Relatives and friends are invited to Paul’s Life Celebration at Puckett Funeral Home, 115 Covington Court, Farmville, VA 23901, on Thursday, Dec. 9, from 6 – 8 p.m. Interment with Military Honors will be held at Grove Cemetery, Old Buckingham Road, Cumberland at a later date. In lieu of flowers, the family is asking that memorial contributions be made to a charity of your choice.