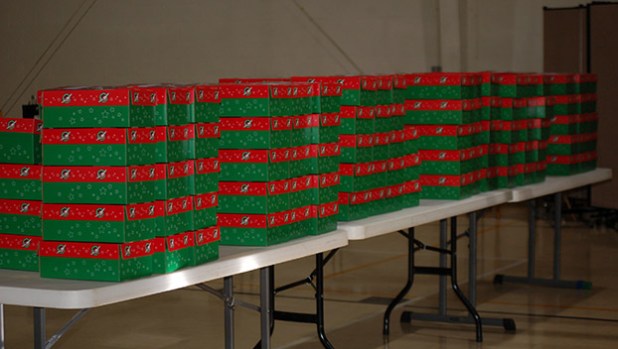 Shoe boxes for Operation Christmas Child are prepared to be filled by church members. 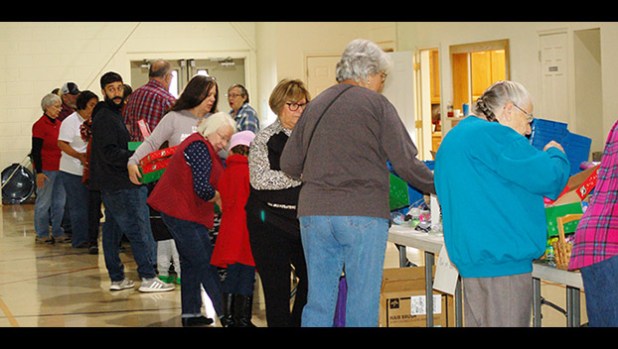 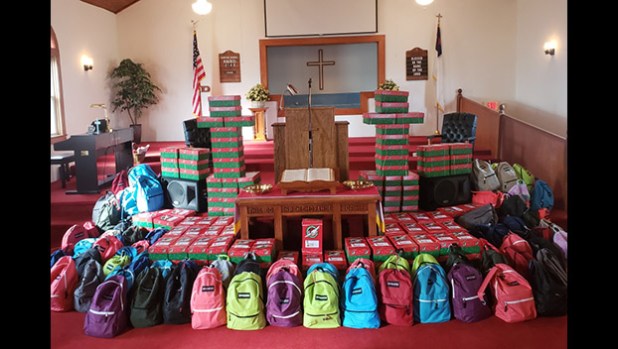 All the shoe boxes and backpacks are arranged and ready to be sent out.

Story and photos by Victoria Thompson

With the Christmas season coming up soon, people are joining together to contribute to the world around them in any way they can. Charity events often come up during this season of giving, and often projects like Operation Christmas Child have become a holiday tradition for local churches.

On Saturday morning, Nov. 6, Worsham Baptist Church hosted a packing party for Operation Christmas Child. Church members of all ages came out to participate and support the cause.

Lorraine Smith, the central drop off coordinator for the Operation Christmas Child South Central Virginia Team, said the group would like to bring on more volunteers in the future.

“We’d love to build up our team members,” she said, “because all we have now are prayer team members and central drop off, which is myself and then the two other drop off team members, the one in Keysville and one in Asheville.”

Operation Christmas Child is a specific project of Samaritan’s Purse, dedicated to delivering shoeboxes containing gifts and necessities such as toys, school supplies and hygiene products to children in need. Samaritan’s Purse is based in Boone, North Carolina and works with over 100 countries to provide aid to people in need.

Smith further explained how the team’s area coordinator resigned several years ago, so that position is not being filled at this time. Also, Smith encourages the idea of expanding the team to get more people involved.

“We have plenty, so we need to encourage others to give and to help them to know this is a tangible demonstration of God’s love when the children receive these gifts,” she said.

Members of the team consist of people who work with churches, citizens in the community, and logistics. In addition, there are those who work in media support for social media, newspaper and radio, as well as the prayer team and student relations with the colleges and other schools in the area.

Heritage Baptist Church is the central drop off location for Operation Christmas Child in Farmville. There are two other drop off locations in the area: Ash Camp Baptist Church in Keysville and Blackstone Presbyterian Church in Blackstone. Worsham and Heritage are two of around 35 churches in the area that participate in Operation Christmas Child.

The project itself has been in existence since 1993. Franklin Graham, the president and CEO of Samaritan’s Purse, helped start the Christmas operation by asking his friend, the late Pastor Ross Rhoads, for assistance in the request made for shoeboxes to be filled with gifts for children in Bosnia, since the country was at war at the time.

Since the project began, 188 million children across 170 countries have received shoebox gifts through the program.

On the global scale, the goal for this year is to bring gifts to 9.7 million children. Last year’s goal was 9.1 million. For Worsham Baptist Church, the goal was to fill up 200 shoeboxes and 100 back packs.

Smith mentioned how the senior members of her own church community at Heritage chose to give to this project online.

Due to the pandemic, Operation Christmas Child promoted the idea of building a box online this year in addition to in-person work. People could go to the organization’s website to build a box and pick the different items to go in it for the price of $25, which included the $9 processing and shipping fee.

Worsham has been collecting items for this all year long. Being involved with this project also reminds local church members the real reason for the season.

“I think it’s important. In scripture, we are commanded to do (events like Operation Christmas Child) to go into all the world.” Smith said, “That’s really what (the purpose is).”

“It’s not just the shoebox gift. It’s sharing the gospel with the children. They have an opportunity to hear the gospel of Jesus,” she said.

Operation Christmas Child spreads the gospel of Christianity at the various distribution events held across the world where children receive messages about Jesus while getting their shoebox gifts.

It does a lot too to the people giving,” Smith added. “It enlarges your heart when you give to others and share.”

“Your impact is so much greater when you’re joining with other churches and not just out there trying to do it yourself. You couldn’t do it alone. We need each other,” Smith admitted.