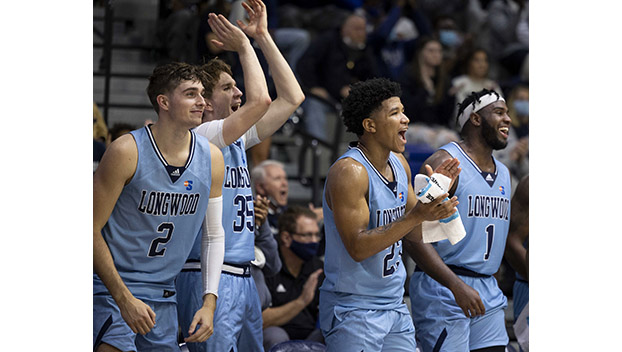 In a December in which they spread a wealth of holiday cheer in Willett Hall, Longwood Men’s Basketball gave its hometown fans one last gift before the new year.

The win was Longwood’s third straight and gave the program its second 7-1 home start in four years under head coach Griff Aldrich and seventh such home start in the team’s 45-year history. During this season’s tear, the Lancers have earned all seven home wins by at least 20 points and outscored the opposition by 29.6 points per game in their eight home games.

“I thought our mental effort wasn’t the best today in the first half, but the physical effort is there,” said Aldrich, who has amassed a 33-17 record in Willett Hall in his four years leading the Lancers.

“When that’s there, they can start to work on the other elements. Guys are really grasping that. The other thing is they’re good guys; they’re good, high-character kids, so they’re all about the team. That’s hard. We have a lot of good players. A lot of guys who I’m sure would love to have their scoring average be a little bit higher or their minutes a little bit higher, but they’re sacrificing for the team and putting the team above themselves. That’s exciting to see.”

That full-team effort showed up in the box score in the form of widespread scoring, with junior forward Leslie Nkereuwem scoring a team-high 17 points, senior guard Isaiah Wilkins scoring 15, freshman Jaylani Darden contributing a career-high 11 and four other Lancers adding at least eight.

That top-to-bottom performance saw Longwood hit double-digit three-pointers for a third straight game, eclipse the 90-point plateau for the third time this season, and get 52 points from its bench. Longwood also racked up 18 assists to just eight turnovers, increasing its Big South-leading assist-to-turnover ratio to 1.42 on the season.

“The statistics are kind of hard to look at in a game like this, so I’m more looking at our mental approach and the intensity and urgency we played with, particularly on the defensive end. I thought they really picked it up in the second half. They scored more points than they did in the first, but I thought our approach was better.”

Defensively, the Lancers held Carolina under 30 points in both halves thanks to another stifling effort that forced the Bruins into 25 turnovers. Leading scorer Kester Ofoegbu – who entered the game averaging team highs of 19.6 points and 10.2 rebounds per game – managed just nine points on 4-of-10 shooting, while reserve guard Cameron Buchanan was Carolina’s only double-digit scorer with 14 points.

Longwood amassed 83 points with more than nine minutes left to play before going to its victory formation, and the reserve quintet of Darden, Trey Hicks, Ga’Khari LaCount, Cameron O’Connor and C.J. Williams pushed Longwood near the century mark the rest of the way. Darden, a 6-5 guard from Norfolk, carried the scoring load in those final nine minutes, finishing 4-of-7 from the field and 2-of-2 from three-point range en route to his first career double-digit scoring game.

“The thing that excites me is this team is hungry,” Aldrich said. “They’re hungry to get better. I really credit the entire team, but our leadership too. DeShaun [Wade] has been fantastic. He really helps set the temperature for this team.”

The win secured a sweep of a three-game homestand for the Lancers, who will head into 2022 on a four-game road swing that begins this Sunday, Dec. 19, at St. Francis-Brooklyn. Road games at Abilene Christian on Dec. 22, Maryland Eastern Shore on Dec. 30 and Big South foe Hampton on Jan. 5 follow before Longwood returns to Willett Hall to host High Point on Jan. 8 in the conference home opener.