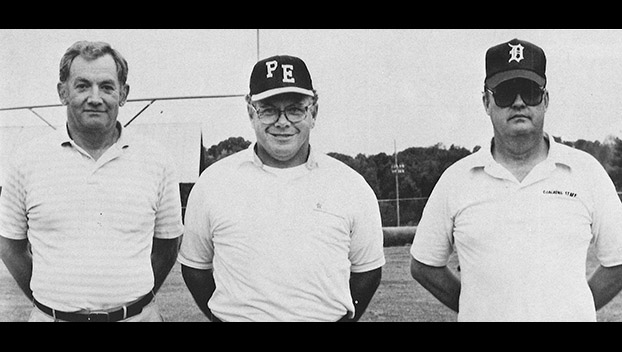 This framed photo of three legends of the fall can be found in Fuqua School’s Gilmer Gym. From left are Coach Robert “Bob” Hazelwood, Coach Lewis “Skeeter” Fore and Coach Walter “Bozo” Addleman.

Since 2000, the PEA/Fuqua School Athletic Hall of Fame has inducted more than 80 former athletes and several special people who have given generously of their time and talents to support the school’s athletic program. This year, the PEA/Fuqua School Athletic Hall of Fame will honor Coaches Lewis “Skeeter” Fore and Walter “Bozo” Addleman as they are inducted and Coach Robert “Bob” Hazelwood as he is inducted posthumously.

Under their leadership, the PEA football teams enjoyed unprecedented success from 1968-1992, with an overall winning percentage of 0.725, eight conference championships, and an overall record of 148 wins, 56 losses and two ties. A press release from Fuqua notes, it is not the wins and losses, the conference championships, or the overall winning percentage that makes these men so special. “During their tenure, these three men became the examples our athletes followed, the voices they heard, and the smiles seen when our alumni look back upon these years and it seems only fitting that all three would become the newest members of the PEA/Fuqua School Athletic Hall of Fame on the same evening,” commented Head of School Chance Reynolds.

The community is invited to join Fuqua School in paying tribute to these three dedicated mentors and respected leaders and in being part of an evening to remember. The induction ceremony will take place on Jan. 15, 2022, with a social hour beginning at 5 p.m. in the Lower School Commons at Fuqua School, and a plated-dinner event beginning at 6 p.m. Tickets are limited and can be purchased at www.fuquaschool.com/HOF tickets.