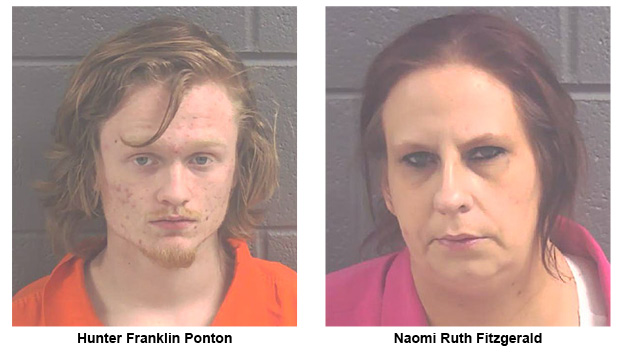 A police chase in Buckingham County on Tuesday resulted in the arrest of two fugitives.

The pursuit continued east on Route 60, to the county line, when the Cumberland County Sheriff’s Office was notified of the incident.

At the intersection of Route 60 and Route 45, Cumberland deputies, according to the release, successfully deployed a tire deflation device causing the Honda Civic to lose tire pressure. The Honda continued on its rims for another mile east, stopping just before Cumberland Courthouse.

Upon stopping, the driver, Hunter Franklin Ponton, 18, of Lovingston, fled on foot and was shortly apprehended in addition to the passenger, Naomi Ruth Fitzgerald, 44, of Roseland.

Ponton and Fitzgerald, Kidd stated, were both found to be fugitives from several different agencies.

Ponton, who had a warrant out for his arrest in Nelson, was charged with felony eluding, reckless driving and no operators license, in addition to other charges.

Fitzgerald, who had warrants out in Nelson, Lynchburg and Amherst, was charged with felony possession of a Schedule 1/11 narcotic and a misdemeanor for possession of drug paraphernalia.

As of Wednesday night, both were being held without bond at Piedmont Regional Jail.