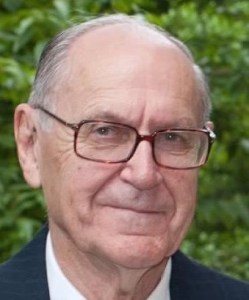 He was predeceased by his parents, Robert Henry Wilkerson and Mattie Chick Wilkerson; his older brother, Henry and his first wife, Emma Frances Elam Wilkerson.

For Emery, family also included his many cousins, nieces and nephews from both sides of his family and from both of his marriages. He was dedicated to his Koinonia, Christian fellowship group, with whom he shared decades-long friendships. He grew up in Olive Branch United Methodist Church in Prospect. In Richmond, he was an active member and elder at Forest Hill Presbyterian Church, then Christ Community Church, and then Crestwood Church.

Emery graduated from Prospect High School and Hampden-Sydney College; he earned his Master of Science degree at Virginia Tech. Emery served in the United States Army during World War II. His early work included Westinghouse, Newark University, North American Phillips and Ohio State University. He then settled in Richmond for a career with Richmond Research Lab, Experiment, Inc., later owned by Texaco. He was a research physicist who never flaunted his title nor his projects, but his work was on the cutting-edge of scientific development. Over the years, he enjoyed many interests and pastimes, including genealogy, bird hunting, bridge, antiques, music, fixing things and college sports. Everyone who met Emery was impressed by the caring way he treated others, his clever sense of humor, his sharp mind, and most of all his strong and steady faith. He consistently pointed people to the Bible for encouragement and guidance. He knew that His Savior Jesus Christ had met his spiritual needs, and his demeanor and attitude were always that of a man at peace with His Creator.

A memorial service was held at Crestwood Church on Jahnke Road, Richmond, on Nov. 20. A graveside service was conducted at the cemetery at Prospect United Methodist Church, Prospect, on Nov. 21.