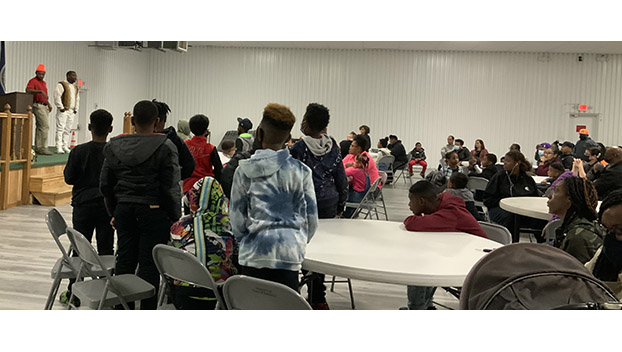 Football players and cheerleaders of the JRSYFL were recognized for their accomplishments during the season closing ceremony at the Farmville Sports Arena.

On Nov. 16 at 6 p.m., a closing ceremony was held at the Farmville Sports Arena for the Prince Edward Youth Football and Cheerleading divisions of the James River/Southside Youth Football League (JRSYFL). Youth Football Commissioner Melvin Mitchell opened the ceremony by congratulating the players, cheerleaders and parents for their accomplishments during the season.

Gifts were presented by the recreation department to the volunteers for their hard work at the concession stand during the season. All cheerleaders and football players were offered a trip to AJ Skateworld to honor their persistence through this season. This event was planned and organized by the coaches and volunteers of the football and cheerleading divisions.

The coaches showed great dedication and commitment this season to the Prince Edward Youth Divisions:

If you would like information about the youth football and cheerleading programs or additional programs, please contact Thomas Woodson, Recreation Director, at (434) 392-3737 or at twoodson@farmvilleva.com.