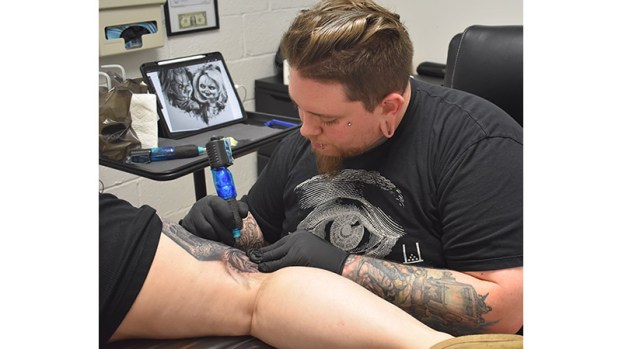 Wade has been working on this scary movie-themed sleeve for horror movie fan and fiancée Mikaela Nelson for some time now. 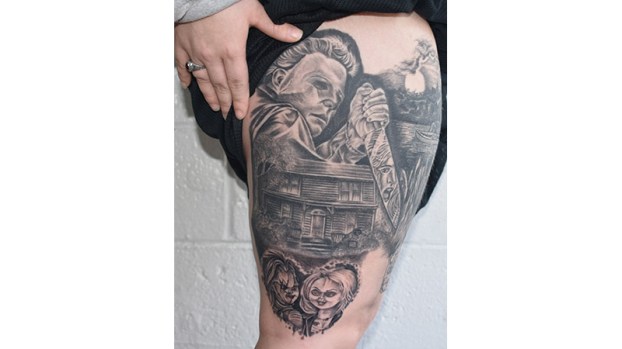 Wade made his most recent addition to the piece at the beginning of October when he tattooed Chucky and his bride onto Nelson’s thigh just under Michael Myers of the hit movie Halloween. 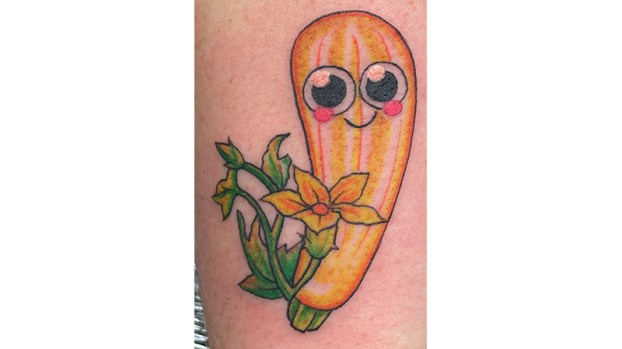 Living in a rural community means Wade gets to do a lot of unique tattoos such as this adorably cute squash done for Holly Bobb. 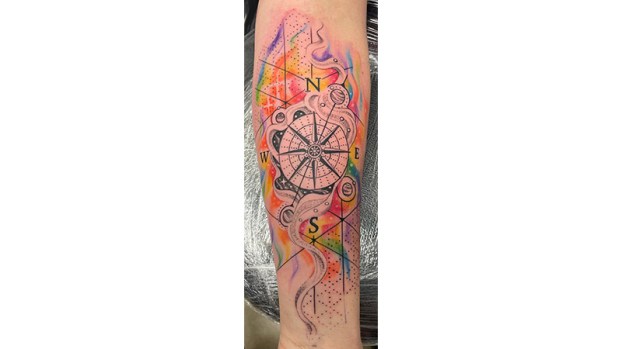 Compasses and outer space are both popular choices for tattoos. This piece combines both for a galaxy/ compass tattoo done for Anna Caddell. 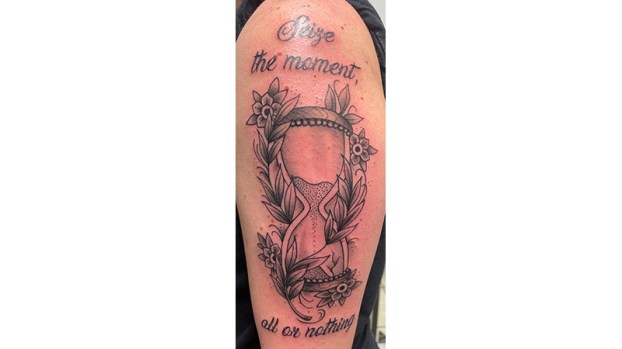 Wade does tattoos in color or in black and white. This monochromatic piece was done for Julie Williams. It says, “Seize the moment, all or nothing.” 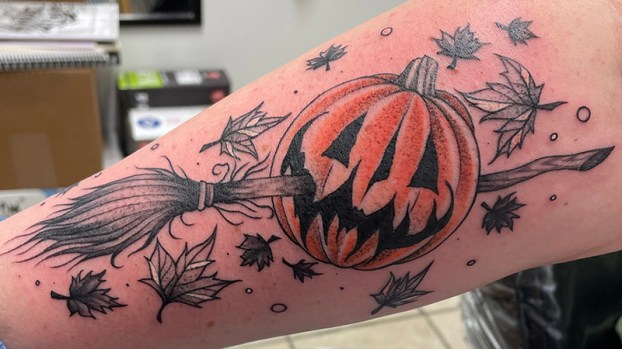 This spooky Halloween tattoo was done by Wade for Brooke Key. 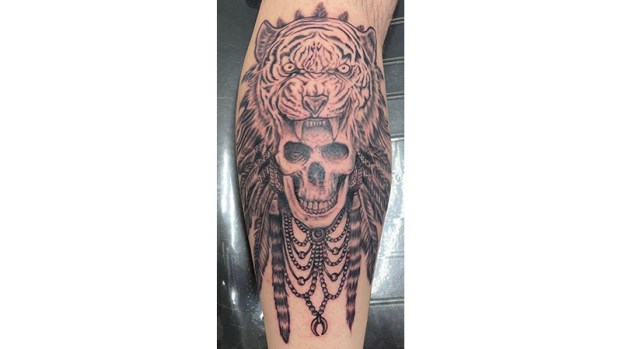 Austin Jones came into Jokers Wild for this tattoo of a skull wearing a tiger headdress. 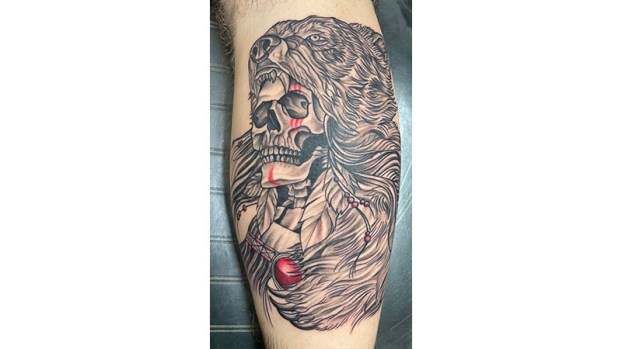 Wade also did this skull wearing a bear headdress for Seth Morris. 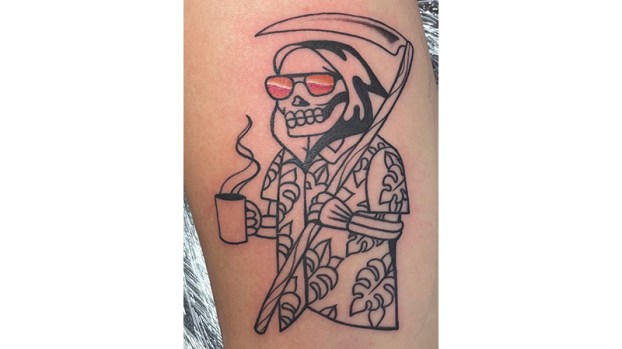 Skeletons are a popular tattoo theme, but they don’t always have to be scary. In this piece done by Wade for Chris Johnson, the grim reaper enjoys his vacation while sporting a Hawaiin shirt and a cup of joe. 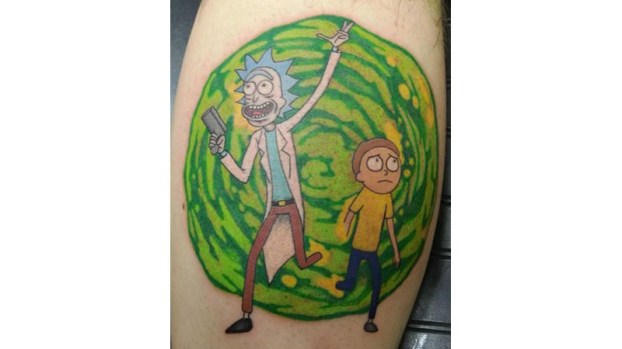 Many people like to get tattoos of their favorite movies or TV shows, including this tattoo which Wade created for Brandon Blalock of the two main characters of the hit TV series Rick and Morty.

Farmville is rich in artistic talent, from potters and painters to musicians and crocheters. Amid the many creators who reside in town are a special breed of artists who create a permanent work of art of which residents proudly display on their skin.

You may not find a tattoo artist opening up a booth at the local farmers market or displaying their work in a nearby gallery, but these artists create intricate, beautiful and often meaningful works of art which people wear on their body for the rest of their life. It’s a craft which requires an innate talent and years to master, and one young, local artist has spent the last several years making a name for himself in the area.

Patrick Wade, age 31, is originally from Charlotte Courthouse. Today, he lives in Farmville and spends his time working as a tattoo artist at Jokers Wild located at 815 East Third St.

Although young, Wade has quickly established himself as a talented artist in the community. You can find his work all over town — sticking out of sleeves, wrapped around ankles, even on fingers and toes — his canvases are living, breathing people, and his artwork walks out the door as soon as he’s finished.

Like most tattoo artists, Wade’s passion for the craft can be traced back to an early love of all things art.

“When I was a kid, I used to doodle and draw on everything all the time,” he said.

Growing up, Wade spent countless hours sketching on anything he could find. He even occasionally got in trouble for doodling on his schoolwork.

In middle and high school, Wade took many art classes where teachers helped his passion for art to flourish. However, his artwork was temporarily placed onto the backburner after he began to gain an interest in music. He learned to play a variety of instruments and even joined a band in his senior year at Randolph-Henry High School.

Wade played in a metal band for several years, and during this time he traveled and performed in many shows while also working at restaurants to pay the bills. It was around this time that he met Jason Ownby, owner of Jokers Wild. Ownby opened the shop in 2010, and today, four talented artists call the business home.

“He tattooed all my friends, and so he knew me. He did my first tattoo. He’s done a lot of them,” Wade noted.

Ownby, who was looking for another employee at the time, learned of Wade’s artistic talents and inquired if he would ever consider becoming a tattoo artist.

“At the time, I wanted something better,” Wade said. “The music thing wasn’t really working out. I decided to give it a try.”

Around 2014, Wade began an apprenticeship at Jokers Wild under the supervision of Ownby, a licensed instructor. There, he learned the ins and outs of how a tattoo parlor is operated, from bookkeeping to cleaning.

Gradually, Wade learned more and more about the business. Under Ownby’s instruction, he completed the state requirements for tattoo apprenticeships, logging tattoos done and hours performed. He studied up and took the state board exam to officially become a licensed tattoo artist.

Wade has since remained with Jokers Wild, and for nearly seven years he’s been inking locals and creating breathtaking works of art.

Tuesday through Saturday, 1-9 p.m., Wade can be found in his workspace at the tattoo parlor, and no days are the same. In Wade’s line of work, an artist can spend their entire shift doing one large tattoo or several smaller ones.

Although Wade works in a variety of styles when it comes to his tattoos, he is known for his excellent linework — what many would consider to be the foundation of a tattoo artist’s skill set. Creating clear, smooth lines is a must.

Although very different from the well-defined lines that make up his other work, Wade has in recent years developed a love for realism — some of his tattoos look as if they might jump right off the page, or rather, the person.

And though he looks up to a variety of tattoo artists and their signature styles, Wade finds inspiration in many other mediums.

“I just love art in general,” he highlighted.

When locals are looking to get a piece done at the shop, Wade said, customers will either message the business on Facebook, call or come in person (the preferred method) to inquire about getting a tattoo.

Step one in the process includes coming in for a consultation where Wade will ask about what type of tattoo the customer is considering getting. He works with them to determine size, placement and other details of the design. He also discusses a rough estimate for the piece and how much time might be needed in order to complete it.

From there, customers can schedule an appointment. Wade will prepare for the tattoo by sketching up a design, often scouring the web for reference photos and other inspiration. When customers come in for their appointment, they complete some paperwork and provide their ID. After the location of the tattoo is cleaned and shaved, a stencil is placed on the skin using transfer paper which leaves thin, purple lines behind as a guide for the piece. Once the stencil is dry, it’s time to get inked.

Wade’s highest priority when working with a client is to make sure that person is comfortable. Naturally friendly and easy to talk to, he prides himself in making sure every person who sits down in his chair feels welcomed and accepted.

“I want people to know they can be comfortable with me,” he said. “I am never going to judge you. I am going to treat you the exact same way I treat everyone else. It’s all about kindness and respect.”

While some customers get tattoos just for the fun of it, others have meaningful stories behind their pieces. Wade enjoys having conversations with his customers as he creates their one-of-a-kind piece. Talking also helps customers deal with the pain of the tattoo, and sometimes, of the complex memories associated with the artwork.

“We’ll usually talk,” he said. “If it’s a memorial piece, there’s usually a lot of emotions they have to sort through.”

Over the years, Wade has done hundreds of tattoos, each with its own unique story and meaning. While he has certain pieces he’s particularly proud of, he likened picking a favorite tattoo to picking a favorite kid. He’s also not one to judge when it comes to what somebody’s looking to get or where they want to get it, and there’s not too many places on the human body Wade hasn’t done a tattoo.

Wade enjoys his work immensely, and while he has no problem with performing some sillier tattoo work, like the stereotypical fraternity letters on a frat brother’s backside, his favorite pieces are often the ones with a lot of meaning behind them.

He added he’s tattooed people of all ages, including a woman in her mid-70s. Wade recalled giving the woman her first ink.

“You could just tell she’d been wanting to do that for decades,” he said.

Outside of work, Wade enjoys playing music and video games. He also has a large number of tattoos on his own body — sharks, krakens and mermaids, some self-tattooed pieces like roses and scripts, doodles drawn by friends, video game and movie characters, band logos, a tattoo dedicated to his mom, the Jokers Wild logo and a portrait of actress Betty White — just to name a few.

For those interested in viewing some of his work, Wade treats instagram as his virtual portfolio. His pieces can be viewed at https://www.instagram.com/vanhelsingle/.

When asked if he had any advice for those considering getting a tattoo, Wade was quick to respond.