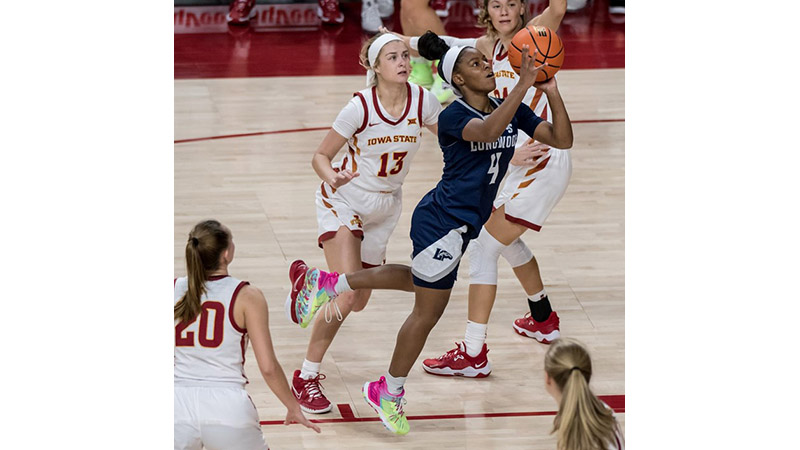 The 14th ranked Cyclones (8-1) bounced back from their first loss of the season and used big days by Iowa City natives Ashley and Audrey Joens to roll past Longwood. The sisters both earned themselves a double-double on the day, combining for 40 points, and 26 of Iowa States 50 rebounds. Aubrey Joens had a career-high 24 points and 14 rebounds, and Ashley Joens added 14 points and 12 boards as five Cyclones scored in double figures.

“There were stretches we did play tired, and they are obviously a really good team from the NCAA tournament, and we knew what type of challenge we were in for,” said Longwood Head Coach Rebecca Tillett about her team’s fifth straight road game. “I think as a unit we would have liked a better response in our toughness against them, especially with our rebounding.”

Meanwhile, the Iowa State defense proved tough for Longwood (3- 5) as the Lancers were held to their lowest offensive output on the season. The Cyclones also scored 32 points off turnovers.

For the Lancers, Kyla McMakin scored 19 points, her seventh time in double digits this season, but the Cyclones held Longwood’s potent offense to 32% shooting from the floor. Kennedy Calhoun continued to build on a strong start to her true freshman season, with the guard scoring a season-best nine points to go with three assists and three steals.

“I think Kenn has been slowly building towards this each game. For her to come here against this type of team, and be able to compete at that level, it shows that she’s a special freshman,” said Tillett. “I think she’s going to continue to show that, and she’s so eager to get better every single day. Plus, she isn’t afraid of the big moments, and the big opponents which is fun to coach.”

“I play every game like it could be my last,” said Calhoun. “When COVID hit, we couldn’t play anymore, and we don’t know when something like that will happen again. So, we all just go out there and play like it could be our last game, and just try to get the win.”

Iowa State came out on the attack, scoring 10 points in the paint in the first quarter alone. That aggressive mindset helped put Longwood in early foul trouble, and the Cyclones went 22-23 from the foul line.

McMakin tallied eight of her 19 points in the first quarter to keep Longwood hanging around, but Iowa State extended the lead by the half and again through the third quarter. The Lancers surged in the fourth quarter, as the two teams scored 17 points apiece, but by that point the damage was done.

“We wanted to go out there and play our game,” said Calhoun. “We focused our game on the small victories to give ourselves a solid chance. I think our response was great, and I think it’ll help us a lot when we reach conference play.”

“If you want to win a Big South Championship you have to win three in a row, all on the road,” said Tillett. “So, I think this has definitely been a challenge for us, but I don’t know if there is any better preparation for us. We have had to incorporate a lot of things that I think will help us reach the goals we want to get to.”

The last game of Longwood’s six-game road stretch will come on Saturday, Dec. 11, at Drexel. The Lancers will return to Willett Hall for their first home game in over a month next Wednesday, Dec. 15, to host A-10 competitor University of Richmond.