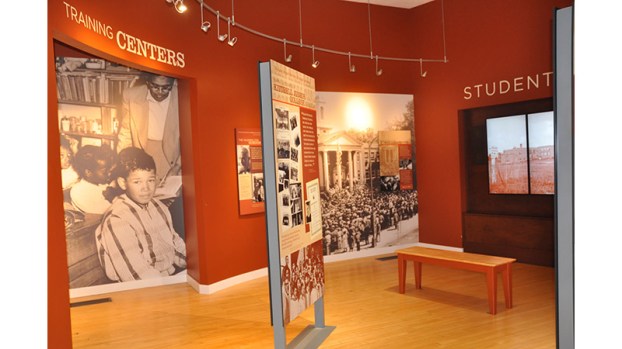 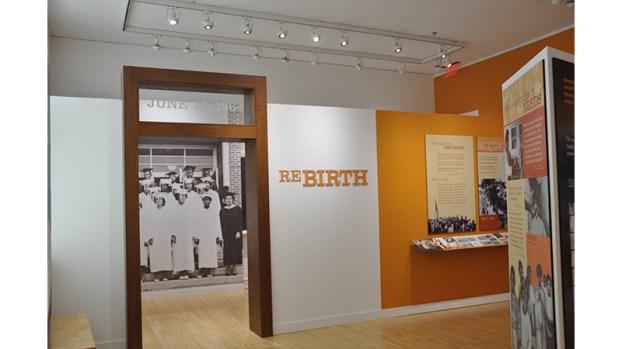 This section of the gallery presents the new era for former Moton High School students. 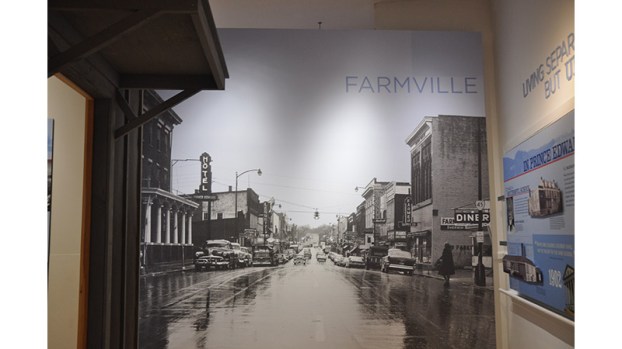 A black and white image shows Farmville's past in a different light. 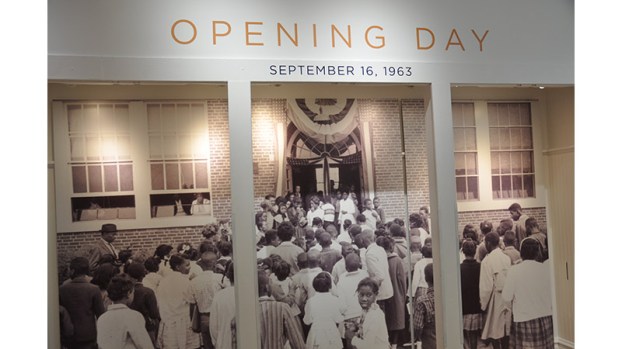 A crowd of students gathers on the day schools reopened after the Brown vs. Board of Education case in 1963. 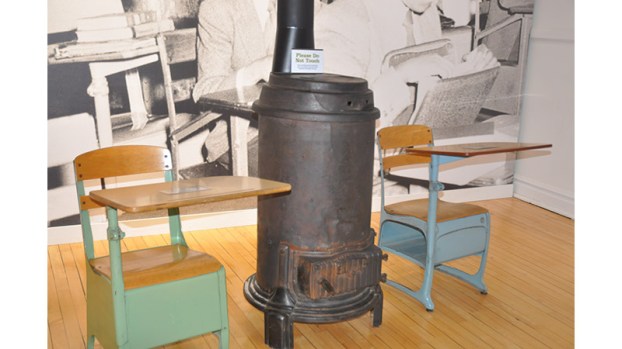 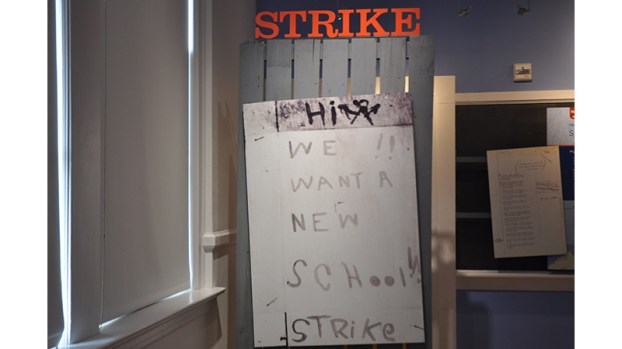 This sign, written by a protester from the 1951 strike, shows courage to fight for a better school. 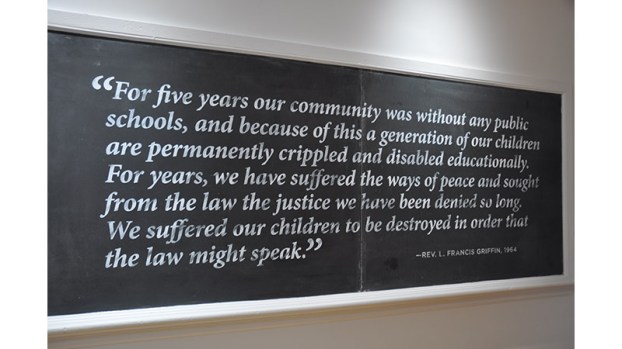 A chalkboard quote by Rev. L. Francis Griffin explains the sacrifice made for educational rights. 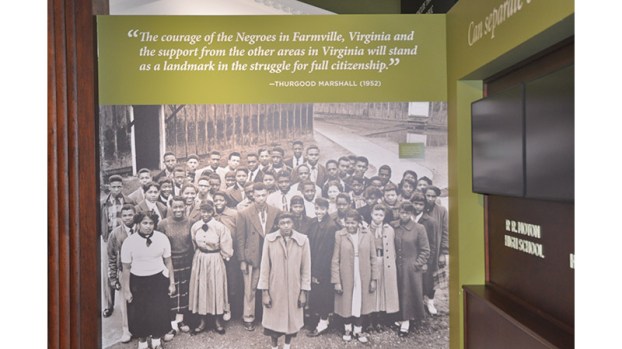 Story and photos by Victoria Thompson

The Robert Russa Moton Museum, located in Farmville, serves not only as a historical landmark for the nation but for the community as well. The building, built in 1939 as a school for Black children, saw students and teachers endure cruel hardships and ignite change that affects lives generations later.

For a first-time visitor, the museum tour provides context and awareness of how yesterday’s young students struggled, a concept that students today may not automatically realize.

The tour begins with a short film about the life-changing event when Barbara Johns led the strike on April 23, 1951, to encourage her peers to fight against the poor conditions they were being educated in.

Before the museum was a historic landmark, it was known as Robert Russa Moton High School, the first African American high school in Prince Edward County. Over the course of a decade, the student population grew from around 160 to 450 students.

One section set up for the tour presents the severity of said conditions with old-fashioned wooden desks placed on both sides of a heater, signifying that Moton students sat in overcrowded classrooms with uncomfortable temperature settings.

An emphasis is placed, in addition, on the fact that Johns was just 16 years old at the time she chose to stand up for social justice. In a world where the voices of youth are often ignored, sometimes more when it comes to young ladies, the story of Johns reminds tourists and members of the Farmville community that power and courage are not bound by age restrictions.

Cainan Townsend, the associate director and director of education and outreach at the Moton Museum, explained that the 1951 strike was a unique form of activism because it was led by students; this event served as a precursor to other famous Civil Rights advocates like Rosa Parks and Martin Luther King Jr. who were both adults when promoting social justice in the later 1950s and 1960s.

With the upkeep of specific historic details, such as the original flooring and color scheme, the Moton Museum seeks to acknowledge the history in every possible light, from injustice to achievement.

Leah Brown, the assistant director for education at Moton, discussed how it is an honor to be able to tell the story of how the museum came to be.

Several of the museum displays show how government officials were slow and hesitant to recognize the need for educational change. The black and white photos in the displays work to present the urgency of those learning and working in Moton, which contrasts with the lack of concern shown in the faces of government officials.

Another historical moment cemented within the museum includes the infamous decision that Prince Edward County made to close down schools in 1959 rather than participate in integration.

Like the rest of the museum, the section dedicated to the closing of local schools captures the determination of Black children and adults in the area to protest for the right for the quality education that white schools already gave as well as the impact of young children.

In one display, white and burgundy outlines of people are placed behind quotes of those who were in favor of the county’s decision of schools closing instead of desegregating. Brown pointed out one quote that she seemed disgusted with in particular, where a man preferred his child to be ‘ignorant’ rather than go to school with other Black students.

Brown also mentioned how desperate people were to have the students catch up in their studies once schools finally reopened in 1963.

For today’s students, the concept of catching up in class brings up thoughts of returning from being sick at home for a few days. Meanwhile, the former Moton students experienced adjustment for both racial and educational matters.

Now, the Moton Museum functions as a piece of education and history by the tours offered to the public. Even though the number of groups visiting has fluctuated due to the pandemic, the museum currently provides digital tours that some schools can take as a field trip opportunity in addition to virtual reality tours.

Although in-person numbers have not been the same as before the pandemic, there are in-person guided tours available as well with masks being required when indoors at all times.

Ever since the museum partnered with Longwood University in 2015, the combined knowledge of college students and museum staff has increased the scale of the community awareness of Farmville history.

Looking back on Black students having to fight to be considered educationally equal to white students in the eyes of state law opens modern eyes of all ages.

The museum itself serves as a reminder that gaining progress for social justice is a continuous journey. Yesterday’s students fought for the right to be educated, and today’s students pay their respects to their elders by visiting and interacting with staff, seeing a common goal in preserving the history of the community where change was made.

When it comes to the effect that the Robert Russa Moton Museum has on its community and surrounding nation, there will always be something new for people to learn about the past in Farmville.