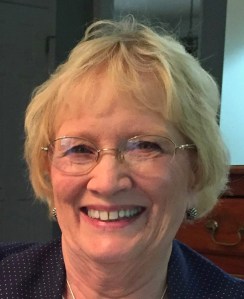 Jean Yvonne McKain, 82 of Rice, died on Oct.19. She was a wonderful and loving wife, mother (four), grandmother (10) and great-grandmother (seven). She had a love for all things involving music and attended Lancaster Bible College, where she sang in the college traveling choir. She and her husband of 61 years, George, lived for periods in Lancaster, Pennsylvania; Lock Haven, Pennsylvania; Farmville; Evans,

Georgia and then retired to Rice.

While living in Farmville, Jean worked in the Admissions office at Hampden-Sydney College. She enjoyed meeting and talking with families visiting the college for tours. She loved the college and could often be heard commenting on both the pristine beauty of the campus and the exceptional caliber of young men that attended there.

In each location, Jean was an active church member. If she was not sitting at the piano, you could find her teaching in the children’s ministries; and when not at the piano or teaching, you would see her mingling with church members making mental notes of whom she might need to remember in her prayers. While living in Evans, Georgia, she followed her passion and became the Director of Children’s Ministries at the Evans First Baptist Church. She and husband, George, established, among other things, a children’s church program. With husband George as minister and her as music coordinator, they were a dynamic duo of both coach and mentor to many young lives.

Outside of church, one of Jean’s other passions was keeping a peaceful home. She was a true believer that cleanliness was next to godliness, and her actions showed she wanted to sit as close to God as she could. If you ever went to her home, it was spotless. At times, it seemed she could somehow magically conjure up washcloths at will anytime something needed to be cleaned (this included children). Her friends would often joke that she was a cleaning machine. After having Jean in their homes, they noticed their kitchen countertops, along with other parts of the house she may have encountered, were spotless. Having a tidy home and good, warm meals was her love language, and she showed love whenever and wherever she saw the opportunity.

Jean’s truest passion was her grandchildren. When it came to them, she was tireless. Her grandchildren remember bringing her stacks of books to read aloud. Laughter from both her and the children would echo throughout the house as she struggled through a Skippyjon Jones book. She is also remembered, among other things, for warm smiles, soft songs while rocking the children to sleep, handmade Halloween costumes, lessons in Pennsylvania Dutch style cooking and orchestrating many memorable family Thanksgiving meals. One of her granddaughters remembers fondly how she would inspect each potato to ensure it was peeled to her exacting specifications.

Many of the traditions she instilled will live on in her family.

She is preceded in death by her son, David McKain of Palmyra, Pennsylvania.

A private celebration of life will be held by the family.