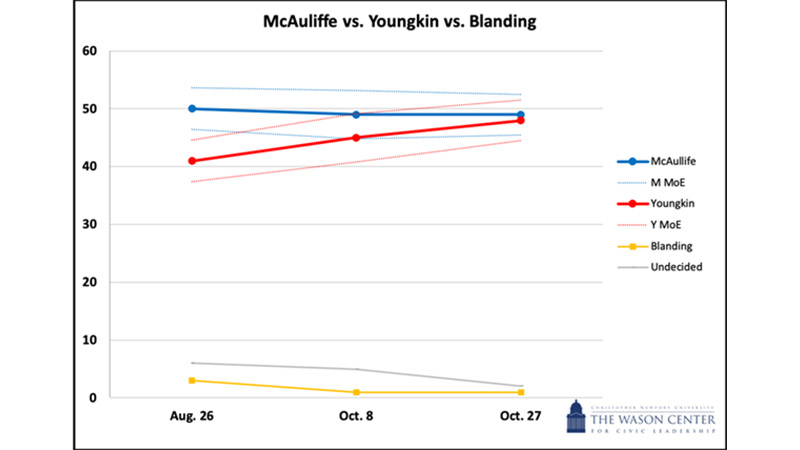 Former Democratic Gov. Terry McAuliffe holds a 49% to 48% lead over Republican Glenn Youngkin in Virginia’s contest for governor, according to a survey of likely voters released Wednesday by the Wason Center for Civic Leadership at Christopher Newport University. McAuliffe’s 1-point lead is within the survey’s margin of error (+/-3.5%), a virtual tie in which third-party candidate Princess Blanding’s 1% share of the vote looms larger.

Republican likely voters are significantly more enthusiastic about voting in this election than Democrats (80% to 65% very enthusiastic), an advantage that has surged 9 points since the Oct. 8 Wason Center survey.

“McAuliffe is facing strong headwinds in a state that has historically selected governors from the party not in the White House and with a Democratic president whose approval rating is underwater,” said Wason Center Research Director Dr. Rebecca Bromley-Trujillo. “Republican voters also appear hungrier for a win and increasingly see a chance to take a statewide race for the first time since 2009.”

Democratic leads that showed in previous Wason Center polls during this election have all but disappeared.

The results of this poll are based on 944 interviews of registered Virginia voters who are likely general election voters, including 446 on landline and 498 on cell phone, conducted Oct. 17-25. The full report is online at https://cnu.edu/wasoncenter/.