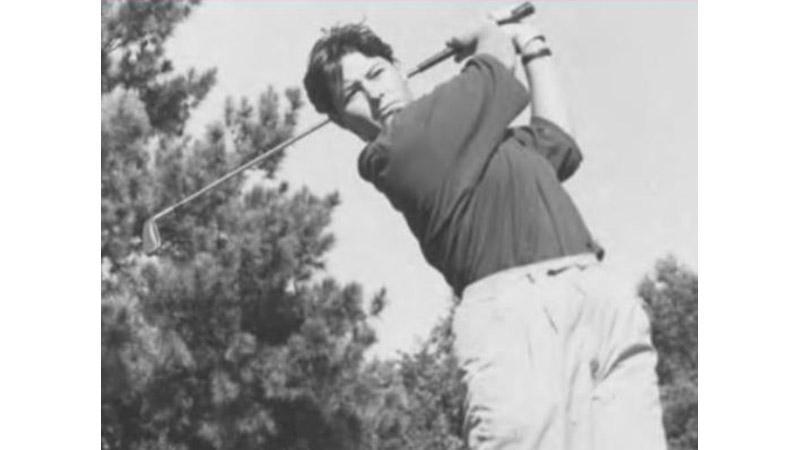 Since her standout playing days at Longwood, women’s golf alumna Charlaine Coetzee Hirst has spent decades as an ambassador for golf, continually seeking to help the game grow and reach new players. This week, the LPGA recognized her efforts by naming her the LPGA Professionals Junior Golf Leader of the Year.

The award, established in 2012, is given to an LPGA Professional member who excels in teaching and promoting golf for juniors.

For Coetzee Hirst—the sole owner of her own business, Charlaine Hirst Golf LLC, headquartered at The Country Club of Whispering Pines since 2009—teaching and promoting the game has been the focus of many of her programs. The Lancer legend and Hall of Famer is constantly adapting her approach, tweaking her offerings to reach those who want to learn to play so that golf is accessible. Her clientele includes future professionals, hobbyists, and newcomers to the sport.

Since 2009, Hirst has hosted weeklong junior summer camps, introducing the fundamentals of golf to students, which have impacted 900 junior golfers. Some of her camp participants have returned to later serve as junior assistants at the camp, with many employed in their first jobs.

She is also the site director for LPGA*USGA Girls Golf—Whispering Pines, enabling her to empower girls to both learn the fundamentals of golf and have fun at the same time. At the site, her all-female group of 24 volunteer coaches adds to the experience, and she encourages participants to give back to the community with creative fundraising campaigns.

Across the entirety of her golf career, Coetzee Hirst has had a lasting impact, whether as a teacher, golfer or student-athlete at Longwood. Prior to being named the LPGA Professionals Junior Golf Leader of the Year, she received the Sandy LaBauve Spirit Award in 2020, the most coveted honor bestowed by LPGA*USGA Girls Golf. She has been inducted into both the Women’s Golf Coaches Association Hall of Fame as well as the Longwood Hall of Fame. In 2006, she tied for first in the LPGA Teaching Division National Championship, and she also won the LPGA Teaching Division Southeast Sectional Championship 2009 while finishing third in 2008. That came on the heels of a nine-year career on the LPGA Futures Tour from 1996-2004 that included qualifying and competing in the 1998 U.S. Women’s Open.

As a Lancer, she remains one of the most decorated and prominent student-athletes in school history. She led Longwood women’s golf to a pair of NGCA National Championships (1993, 1995) and still owns the school record for a 54-hole round (71-71-70—212), which she set during her run to the 1994 national title.

Coetzee Hirst was a four-time NGCA All-American who came to Longwood to play for legendary head coach and fellow Longwood Hall-of-Famer Dr. Barbara Smith. Coetzee Hirst was also named the Honda Division II Athlete of the Year, the Virginia NCAA Woman of the Year and Today’s top Eight in 1995 while also being named to the NGCA All-Scholar Team three times.