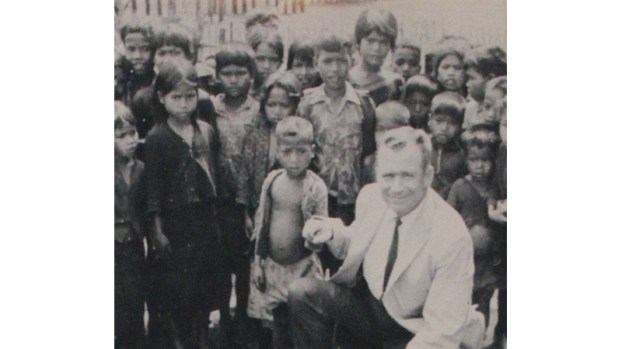 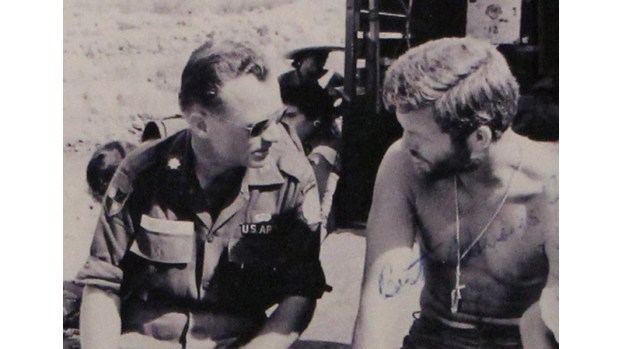 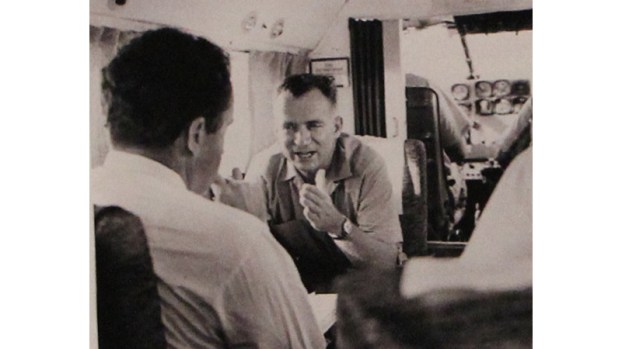 Wilson briefing Richard Nixon on a plane prior to Nixon’s presidency. Nixon met with Wilson more than once in Vietnam. 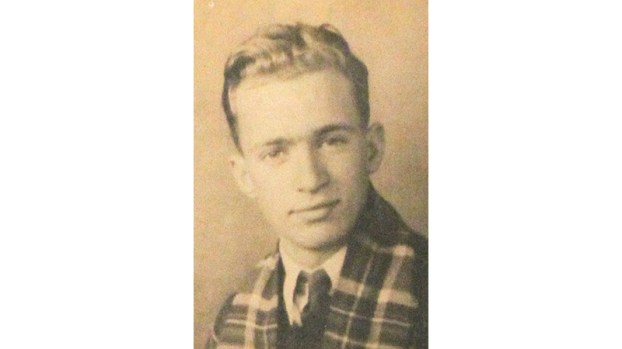 Wilson in 1938, age 15. Wilson was a standout in high school, finishing at the top of his small class. 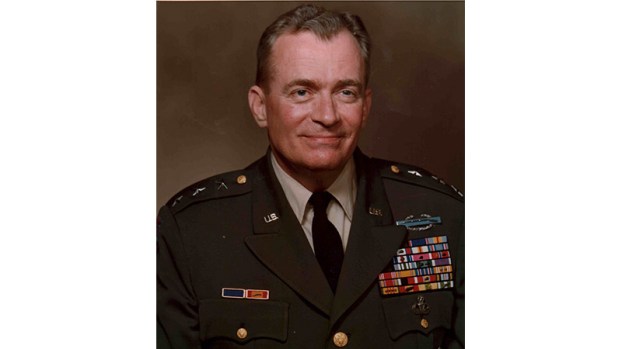 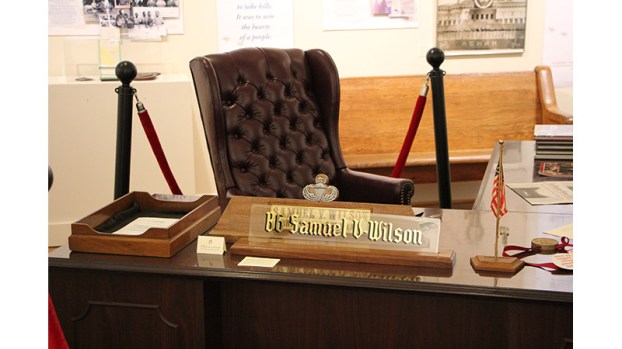 This desk and chair are part of the exhibit. 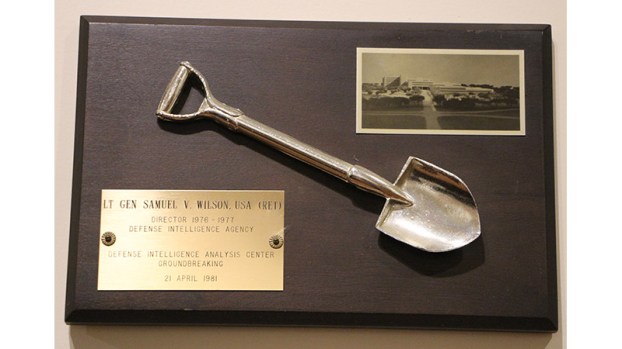 A commemorative plaque for the groundbreaking for the Defense Intelligence Analysis Center that was held April 21, 1981. 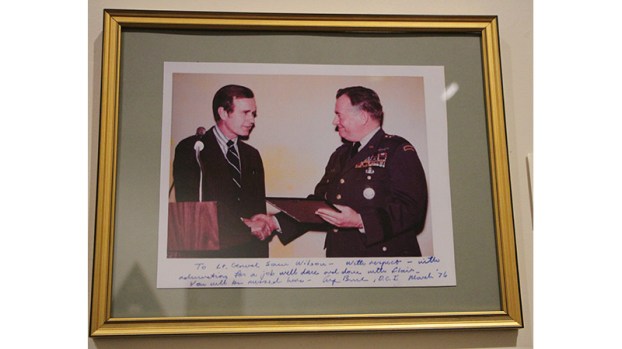 a picture of Wilson with George Bush in March of 1976. 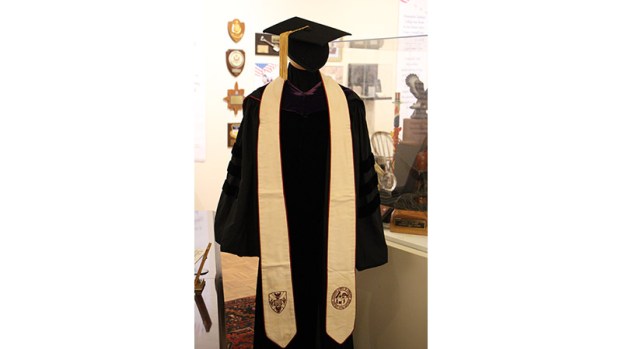 The academic regalia Wilson would have worn as college president. It was made by trustee wives for the inauguration of President Bunting in 1975 and was used until President Bortz commissioned the Presidential medallion and chain. 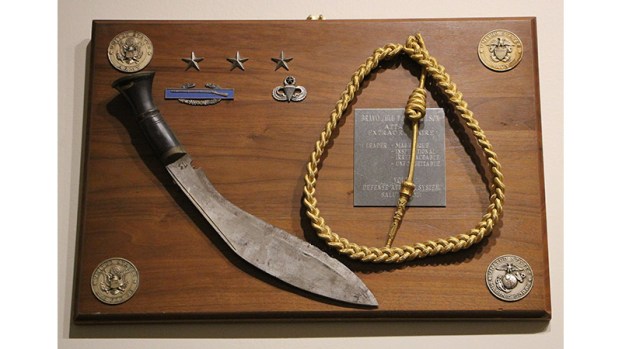 A plaque that includes an Army airborne master parachutist badge and a gold braid, an Army dress aiguillette which is worn only when personnel are performing duties as aides.

Story by Dr. Ryan Pemberton, Director of the Wilson Center for Leadership in the Public Interest at Hampden-Sydney College

All of these terms and more describe Lt. General Samuel V. Wilson (U.S. Army-Ret.), the former president of Hampden-Sydney College who passed away in 2017. General Sam, as he was affectionately known, led a fascinating, impactful and meaningful life—one that the public may learn more about by visiting an ongoing exhibit at Hampden-Sydney’s Esther Thomas Atkinson Museum titled “An Officer and a Gentleman: The Life and Times of Lt. General Samuel V. Wilson. ”

A proud Price Edward County native, Sam was born on the family farm in Rice, enlisting as a bugler at just 16 years old to serve in World War II in June of 1940. Legend has it that Sam listened to Winston Churchill on the radio one night and was so moved that he woke up and hiked the six miles from Rice to downtown Farmville to begin a professional journey that would lead him back home 37 years later. Not long after enlisting, he found himself as part of the famed “Merrill’s Marauders” 5307th Composite Unit. Sam served as the unit’s chief reconnaissance officer and later as a technical advisor in the 1962 Hollywood blockbuster of the same name.

After the war, he studied Russian and attended graduate school at Colombia University. That experience led him to serve in Eastern Europe where he spent time in the CIA’s clandestine services and as a foreign area officer in the Army. During the Vietnam era, Sam served as a Foreign Service officer and as a diplomat working to build capacity for our allies. From 1971 to 1973, Sam served as the Defense Attaché in Moscow at the height of the Cold War. Rumor also has it that Sam served as the CIA’s Chief of Station during that same time. This dual service is so remarkable that it is possible no other person has served in both roles at the same time. His career was capped with a stint as the Director of the Defense Intelligence Agency. He retired as a three-star general in 1977. Along the way, Sam was credited with coining the term “counterinsurgency” and played a key role in the development of the unit known as the Delta Force. He was elected into numerous halls of fame and advised Tom Clancy on many of his books. If a movie were made about his life, it would be classified as fiction.

What was Sam to do in “retirement?” Hollywood? New York? Washington D.C.? Sam chose to return home to what, in his words, “was his favorite place with his favorite people.” Upon retiring from the Army, he retraced his steps heading from Farmville to the farm in Rice and continued to serve the people and place that gave him all he needed for his exceptional career. Sam was called to serve as a leading citizen in various Prince Edward County and Southside Virginia organizations, including the Longwood College Board of Visitors, the Governor’s Advisory Board on Higher Education in Virginia and as president of the R. R. Moton Museum Board of Directors. Sam began teaching classes at Hampden-Sydney College shortly after returning, became the college’s 22nd president in 1992 and served with great distinction until 2000.

Adored by students, General Sam was famous for teaching Sunday school every Sunday morning and inviting those students back to Middlecourt, the president’s home at Hampden-Sydney, for Mis Susi’s famous Sunday dinners. Always quick with a joke and exceptionally charismatic, Sam kidded often that he would “see 10 students at Sunday School and somehow 30 would show up for Sunday dinner…Mis Susi would miraculously have more than enough food…it was like loaves and fishes.”

Students adored him because he was present. Athletics events, classes, breakfast in the Commons, Sunday school, campus events—General Sam was there. The holistic growth of “his young men” in hopes they would become the “good men and good citizens” needed to perpetuate our republic was his primary mission; that feeling was palpable on campus.

Upon being elected as president, General Sam said “the single most important person on this campus is the student, followed closely thereafter by the faculty and staff who serve as his mentor. The single most important thing that happens on this campus is that colloquy between student and mentor. All else is secondary and supporting.” When he retired in May of 2000, he closed commencement with these final words as president: “It’s now your world; it’s not mine anymore. It’s a beautiful, blue jewel… a shining sphere. Love it, cherish it, protect it and keep it.”

As a former student of General Sam’s, I am honored to serve as director of the Wilson Center. General Sam’s memory serves as a role model. Our current students were not lucky enough to know him, but every young man with whom we work learns from or is inspired by his life of service. They are an important part of his legacy.

Upon General Sam’s passing in June of 2017, his family gave nearly all of his belongings, personal effects and writings to the college. It is a veritable treasure trove including 307 boxes of papers, books and writings. Highlights include his induction papers to the army, green beret, bugle, diplomatic passports, signed books, pictures, awards, personal correspondence and writings about everything from national security policy, higher education and civic affairs. Two years ago, a group of loyal supporters provided funds to the college to hire a full-time term archivist. The archivist, Dr. Colin Woodward, finished his work in June of 2021.

Bortz Library Director and Chair of the Wilson Center Faculty Advisory Committee Shaunna Hunter stated that “working with the Wilson collection has been one of the most gratifying experiences of my career” and that as we move forward we will “add steel shelving to hold the collection and ensure that our finding aides are available to researchers online while digitizing selected portions of the material.” Researchers or students interested in higher education, World War II history, the Vietnam era, formation of the CIA, the Cold War, counterterrorism, counterinsurgency theory or simply 20th Century American History can benefit greatly from this collection.

The Esther Thomas Atkinson Museum opened an exhibit dedicated to this special collection in the spring of 2021. “ An Officer and a Gentleman: The Life and Times of Lt. General Samuel V. Wilson” was curated by Atkinson Museum Director Angela Way and Dr. Richard McClintock. The exhibit is open from 10-12 and 1-5 on weekdays and special event Saturdays through the 2021 fall semester.

All are welcome and encouraged to attend, especially friends from Farmville and Southside Virginia. General Sam was a Prince Edward County native. He was born here and passed away here. This was his home. This exhibit examines his life and also firmly connects him to this place.

Come learn about an amazing and impactful life and the people and places that paved the way.