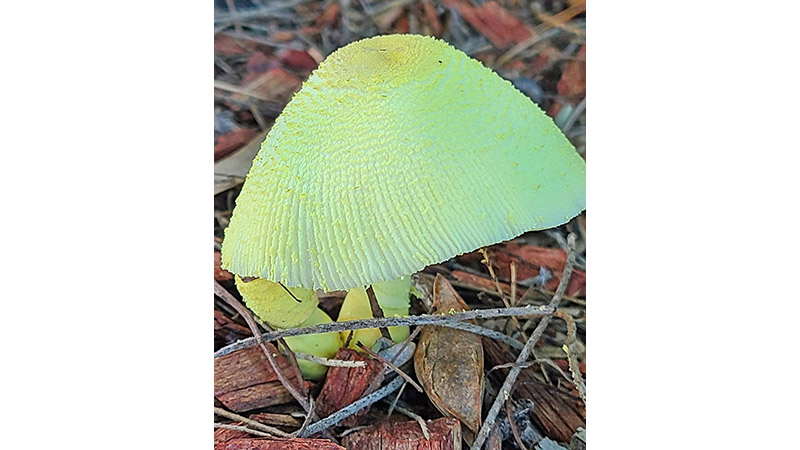 There are three stages of development of the flowerpot parasol mushroom: the nubbin emerging from the soil, the mushroom with an unfurled cap and the mushroom with a fully open cap almost ready to release spores. Notice that the color of the last stage is lighter than the other two.

Earlier this summer, my husband commented that he really liked the funny looking yellow flowers in a pot by the front porch. I was puzzled because the pot had sedum in it, not anything with yellow blooms. I checked the pot and found small, bright yellow nubbins sticking out of the soil. By the next afternoon, the nubbins had morphed into small, yellow mushrooms. The mystery of the “flowers” was solved, but not many days later, several people posted photos on Facebook of yellow mushrooms that had suddenly appeared in their flowerpots. There seemed to be an epidemic of the things.

A little research revealed that we all had an outbreak of flowerpot parasol mushrooms (Leucocoprinus birnbaumii), which are common in tropical and subtropical areas but regularly appear in greenhouses and flowerpots in more temperate and northern areas, hence the common name. These mushrooms begin as small yellow balls on the surface of the soil and then grow taller until the caps expand, become oval, and then release their spores. The caps are usually covered with lots of bumps and lines.

Do these mushrooms harm houseplants? No, they just alarm the owners of the plants. Flowerpot parasol mushrooms feed on dead organic material in the potting soil – things like dead leaves, roots, insects and wood chips – breaking them down so that they can be used as nutrients by the plants in the pots. Should you remove the flowerpot parasol mushrooms? Well, that’s a personal choice. They are poisonous if consumed, so if you have inquisitive pets and small children, then you might want to get rid of them. Just be warned that elimination is difficult; removing the mushrooms from the top of the soil isn’t enough to keep them from reappearing when you least expect them. The only solution is to discard the houseplant and potting soil and then to sterilize the pot by leaving it in a sunny location for several weeks and then scrubbing it with bleach.

Mystery solved. Now I wonder when the next outbreak will begin.