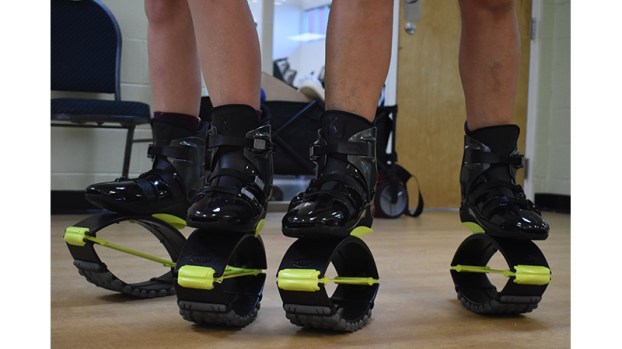 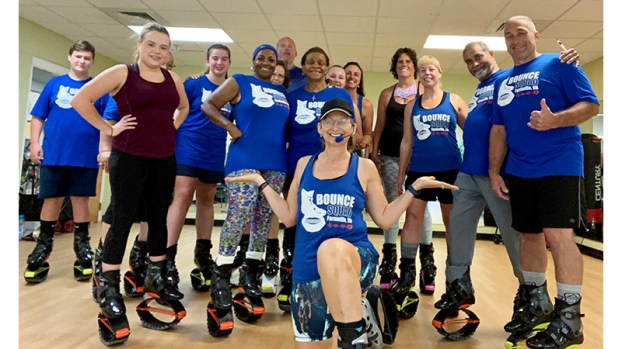 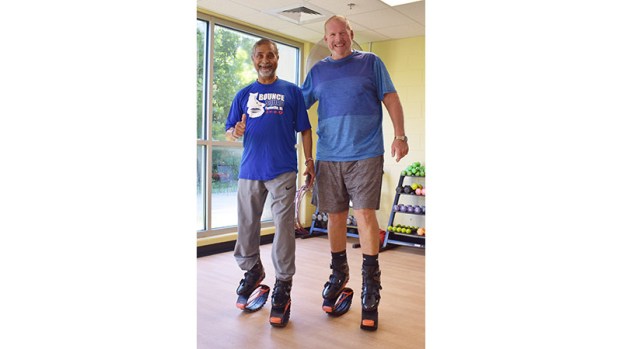 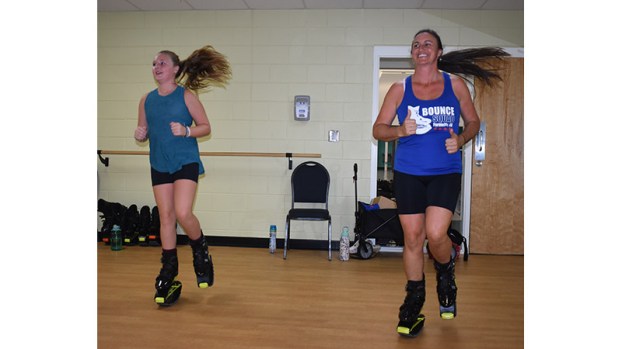 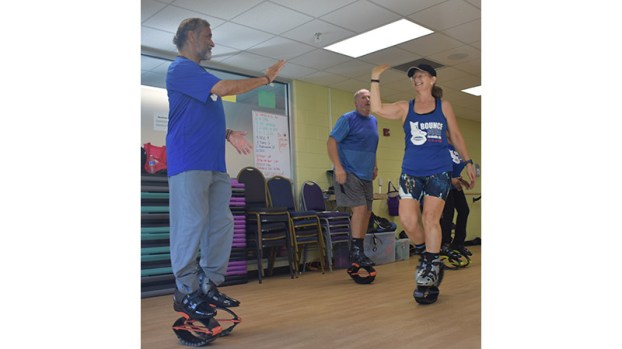 Watsonoffers Ojasyananda and Sibold some highfives after a job well done. (Photo by Alexa Massey) 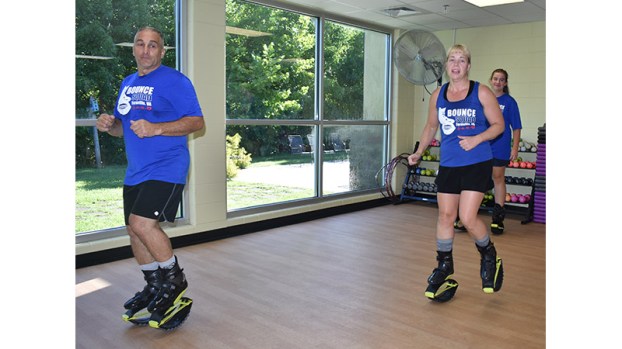 A unique form of exercise has dozens of Farmville residents jumping for joy at the Southside Virginia Family YMCA.

Since February, locals from ages 13 to 76 have found friendship and fitness during the gym’s Kangoo Jumps dance classes.

A variation of a type of low-impact aerobic exercise known as rebound fitness, Kangoo Jumps classes utilize special exercise boots featuring a patented spring system. According to Kangoo Jumps instructor Cindy Watson, the technology reduces the impact on an athlete’s joints by 80% in addition to promoting a better cardio workout.

While Kangoo Jumps and rebound fitness have soared in popularity overseas, Watson, a Farmville resident, discovered the boots herself after looking for a better way to exercise.

When Watson turned 50 in 2016, she weighed 70 pounds heavier than she does today. Growing up, she said, she did not participate in sports, nor had she ever stepped foot in an exercise class.

After shedding the weight thanks to special diet and exercise plans, Watson decided to transition from walking to running in order to continue her fitness journey. But she had to stop after realizing running was causing immense pain in her ankles, knees and even hips.

When researching low-impact exercises, Watson discovered the Kangoo Jumps and bought a pair on a whim. She learned to use them on her own at her home, and while it took weeks for her to finally get comfortable, she soon found herself bouncing along and fell in love with the exercise.

While Watson originally used her Kangoo Jumps to follow along with other instructors’ videos on YouTube, she decided in 2019 she wanted to go further with her newfound passion. After becoming a certified Athletics and Fitness Association of America instructor and later becoming licensed for Kangoo Dance, at the start of the COVID-19 pandemic, she began to teach small classes just for friends in the basement of her home.

In February, Watson was contacted by the local YMCA about possibly teaching Kangoo Jumps dance classes. She happily agreed.

Now, Watson teaches classes every Monday, Wednesday and Saturday at the YMCA. She also offers “basics” classes twice a month on alternating Saturdays. To participate, residents must sign up in advance to obtain one of the 14 slots available, and non-YMCA members can purchase a $10 day pass to take part in the class. Watson uses each person’s shoe size and weight to adjust the boots to fit perfectly.

Residents of all ages enjoy taking Watson’s classes. While the exercise is a great way to burn calories and stay healthy without added stress on one’s joints, it’s also a great way to make friends.

And though it may take some people a few classes to gain the confidence to stand up on their own in the boots, others are surprised at how quickly they are able to adjust to the Kangoo Jumps and are ready to dance in just minutes.

But dancing isn’t the only thing someone can do while wearing Kangoo Jumps. According to Watson, anything that can be done in tennis shoes can be done while wearing the boots. Watson often sports Kangoo Jumps while running on the High Bridge Trail or participating in 5Ks. She even hopes to wear the boots in this year’s Heart of Virginia 10K.

Kangoo Jumps offers a variety of classes instructors can teach, including Kangoo Power, which Watson is also licensed in. She hopes in the future to begin offering Kangoo Kick and Punch classes as well.

While the boots have transformed Watson’s life, for her, the best part of the experience is watching people who once thought they could never do something like this learn that they are capable of more than they think.

“I want that person to know that they can absolutely do this,” she said.

To learn more about Kangoo Dance classes in Farmville, email Watson at bouncesquad@ icloud.com or check out her group’s instagram page at bounce_squad_farmville.