Do the Chelsea chop 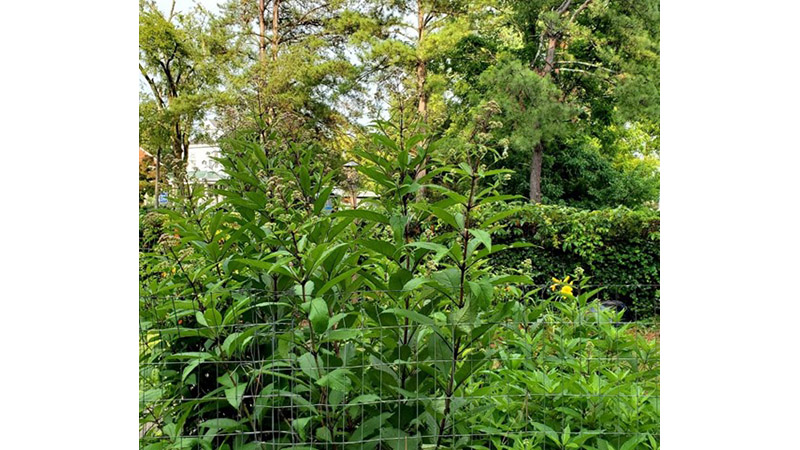 Half of these plants were given the Chelsea chop, while the others were allowed to grow to show the difference in sturdiness and height.

It’s hot and humid, so I haven’t spent much time in the garden. I’ve gone outside every morning to wander through the various beds and to deadhead the daylilies. It’s my early morning form of meditation that gets my day off to a positive start.

Even though I really haven’t been doing any serious gardening, I’ve been getting questions from passersby and neighbors. The question of the week has been, “Why has my monarda flopped in all directions while yours is standing tall?”

So, this column is for all plant lovers who have tall, gangly plants in their gardens. You know the ones – monarda, rudbeckia, Joe Pye weed and many others. The ones that look great until they suddenly flop in all directions.

It’s time to learn about the Chelsea chop, a way to tame tall, gangly plants. Yes, it’s a technique that works and was named for the Chelsea Flower Show in London. In April or May, certainly no later than the end of May, take your very clean secateurs and brutally cut back your Joe Pye weed or monarda or whatever until it’s about one third of the original height. Just choose a spot slightly above a leaf node and make your cut at an angle. The plants will look pitiful, but will promptly recover. They will develop into shorter, sturdier plants than if you hadn’t made the chop. The Chelsea chop will also delay budding and blooming. In fact, I used it last year when I desperately needed very late season blooms in my garden for the PBS program Virginia Home Grown.

A variation on the Chelsea chop can be used to extend the bloom season. Lop off half of the plant, but leave the rest or don’t cut it quite as far back, and there will be both early and late blooms. This technique works for non-natives too. I especially like to use it on tall sedums, such as Dragon’s Teeth and on chrysanthemums. I don’t want these two plants to flop in the first heavy rain or to bloom too early. Who wants bronze-colored chrysanthemum blooms in late June? I certainly don’t.

The Chelsea chop looks brutal at first, but it’s very effective. Don’t worry too much about the angle of your cut or precisely where you’re cutting. Just use clean garden clippers and make the cuts. Your monarda and other plants will stand tall and won’t require staking.

The ultimate pass along garden plant