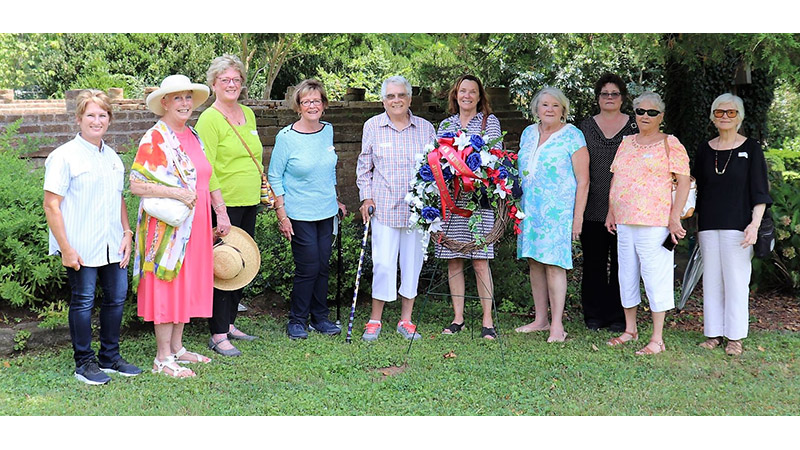 Members of the Judith Randolph-Longwood Chapter of the Daughters of the American Revolution visited the birthplace of the chapter’s namesake, Judith Randolph, at historic Tuckahoe in Richmond Friday, July 30.

Randolph was born there November 24, 1772, and enjoyed her childhood and early adolescence at that location. She was a member of the fourth generation of Randolphs to reside at Tuckahoe.

Upon marriage to Richard Randolph in 1789, she relocated to his vast plantation holdings in Prince Edward and Cumberland counties, Bizarre and Buffaloe. After her husband’s in 1796, she began the slow process of simplifying the plantation assets, leading to the sale of lots to individuals eager to start a settlement in the area.

As a result, the Town of Farmville was established in 1798 on plantation land located to the south of the Appomattox River on the Prince Edward side of Randolph property. A plaque marking a corner of land sold to create Farmville may be seen on the west side of the present-day Farmville United Methodist Church.

In keeping with Richard Randolph’s wishes, Judith freed about 90 enslaved individuals in 1810, giving them 350 acres of land on which they established the settlement of Israel Hill just outside the budding town of Farmville. As noted in the state historical marker Free Blacks of Israel Hill, “These ‘Israelites’ and other free African Americans worked as farmers, craftspeople and Appomattox River boatmen; some labored alongside whites for equal wages and defended their rights in court.”

A few years later, in 1813, Judith’s home at Bizarre burned, and she became dependent on friends for lodging. She died when she was 44, on March 10, 1816, in Richmond, and was buried at her childhood home, Tuckahoe.

Judith Randolph of Tuckahoe and Bizarre was honored when a new DAR chapter was established in 1925 in Farmville. After extensive deliberation, the chapter founders chose her name from a list of 12 under consideration. Thirty-three years later, chapter members marked the resting place of Randolph by inserting a marker into the brick wall forming the boundary that encompasses the Randolph family grave site at Tuckahoe. Judith Randolph Chapter existed independently until it merged with the Longwood Chapter in 1989.

The July visit of current Judith Randolph-Longwood Chapter members included a lunch under the shade of beautiful trees on Tuckahoe grounds, a tour of part of the historic home and a wreath-laying ceremony at Randolph’s grave. The wreath was left beside the marker established by the 1958 chapter as a visual token of the esteem with which the members of Judith Randolph-Longwood Chapter hold this wonderful 18th-century lady, the “mother of Farmville.”