Why I Love Farmville — Rick Ewing

I’ve lived in Farmville for five and a half years. The first thing I remember noticing about the area is the archway over Main Street. I saw it when I took a Google street-view tour of Farmville when I was debating whether to apply for a job in the area. Honestly, Farmville’s curb appeal was definitely a plus. 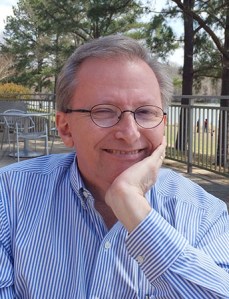 Rick Ewing is the director of the Central Virginia Regional Library with branches in Farmville and Dillwyn.

WHAT IS YOUR FAVORITE FARMVILLE MEMORY?

A: The vice-presidential debate was a blast. It sure put Longwood University and Farmville on the map. My wife Terry and I didn’t get to go to the debate, but we spent the evening on campus. It was so cool to see the sets for the news outlets and the anchors and other on-camera celebrities. Terry had a wonderful conversation with an older couple who turned out to be the parents of Tim Kaine.

HOW WOULD YOU LIKE TO SEE FARMVILLE GROW OR CHANGE IN THE FUTURE?

A: It would be great to see West Third Street get more businesses and organizations to move in. Wilck’s Lake and the trails near it are super, but we need more new development in that part of town. Also, I’d love to see some nice condominiums someplace in town. When we moved here it was tough to find a place to live that was wheelchair accessible. A first-floor condo would have been perfect.

HOW WOULD YOU DESCRIBE THE PEOPLE OF FARMVILLE TO OTHERS WHO ARE NOT FROM HERE?

A: I’ve lived and worked in several different parts of the country. Farmville residents are more enthusiastic about their town than any place I’ve experienced. There is an energy here that other places would love to have. The leaders in the town – business, political, cultural and otherwise – are joyful about everything Farmville. Everyone’s working to make the town better, every single day. One other thing – most people here seem to have multiple roles in the community: a full-time career, a part-time job, a significant volunteer position, a serious hobby, and a farm to take care of on the weekends. And that’s just one person.

IF YOU HAVE TO LEAVE FARMVILLE FOR AN EXTENDED PERIOD OF TIME, WHAT WOULD YOU MISS?

A: One reason I moved here is that small town Farmville has just about everything I need, and it’s all close at hand, without traffic. Combine that with a university and a college right here. It’s like a self-sufficient island. You won’t find that elsewhere. That’s what I would miss.

IF YOU HAVE TO TAKE A PICTURE TO REPRESENT FARMVILLE TO THOSE OUTSIDE OUR AREA, WHAT WOULD THAT PICTURE BE?

A: I would pick a nice Saturday in early fall and send up a drone to take a photo down Main Street. Green Front Furniture shoppers mixing with students and others with every parking place full. A town that’s attractive, clean, and pleasantly busy – that’s Farmville.