The ultimate pass along garden plant 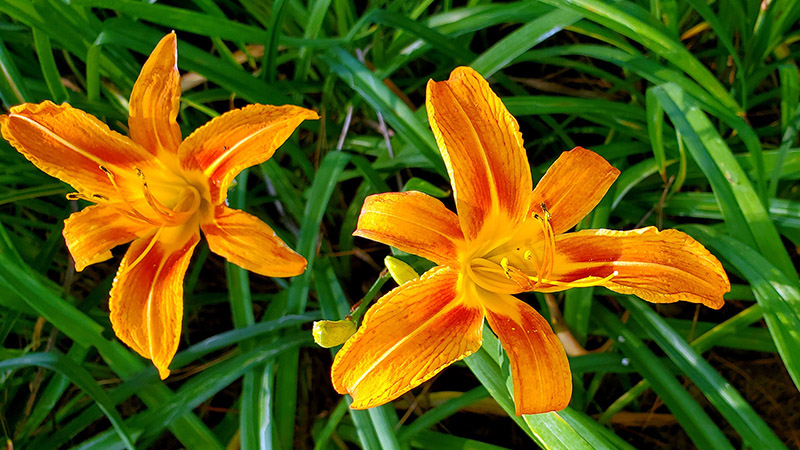 You’ve seen them growing along the side of back roads, near abandoned homesteads and even along the edge of wooded areas.

You’ve probably also seen them in your neighbor’s garden. Full disclosure, I have some too. They’re tough, not afraid of hot summer days and will grow just about anywhere. What is this miraculous plant? The ditch lily (Hemerocallis fulva), the plant with the bright orange flowers.

Many gardeners believe ditch lilies are native to North America, but they’re not. They originated in India, Mongolia, Japan and China, where people added the buds to stir fries. Confucius wrote a poem about them. By the 1500s, ditch lilies had found their way to Europe where they became popular garden plants. By the 1700s, these highly adaptable plants had arrived here and eventually became the ultimate pass along garden plant. Everyone’s grandmother grew them along the edge of the yard and around the Johnny house. Especially there, hence their other common name Johnny house lilies. By the early 1900s, ditch lilies had moved from gardens to wild areas where they thrived and have become a nuisance.

Ditch lilies aren’t true lilies. They grow from tubers rather than bulbs. Why are they such assertive growers? They produce stolons more than a foot long that allows them to find new places to grow. Dig up a clump of ditch lilies, thinking you’re going to get rid of them, leave just a few pieces of those stolons behind, and you’ll have more ditch lilies.

Even if you don’t particularly like ditch lilies, any gardener who grows modern hybrid daylilies owes a debt of gratitude to the humble ditch lily. They were used by Dr. Arlow Burdette Stout, a plant breeder, geneticist and educator at the New York Botanical Garden, to create the first hybrids – more than 90 different cultivars, including the first reds. About 60 of these hybrids are still grown in special display beds at the botanical garden. In 1938, Henry Gleason, the head curator at the botanical garden, noted the commercial value of Dr. Stout’s hybrids was so important it far exceeded the cost of the entire garden. Quite a compliment and so true.

Today, hybrid daylilies are one of the most popular garden plants. Select the right varieties and it’s possible to have blooms from late May into October. Some of the newer cultivars even rebloom.

So, whether you’re interested in heirloom garden plants or in modern new varieties, the humble ditch lily deserves our respect. Well, most of the time.

Beware of poisonous plants in the garden