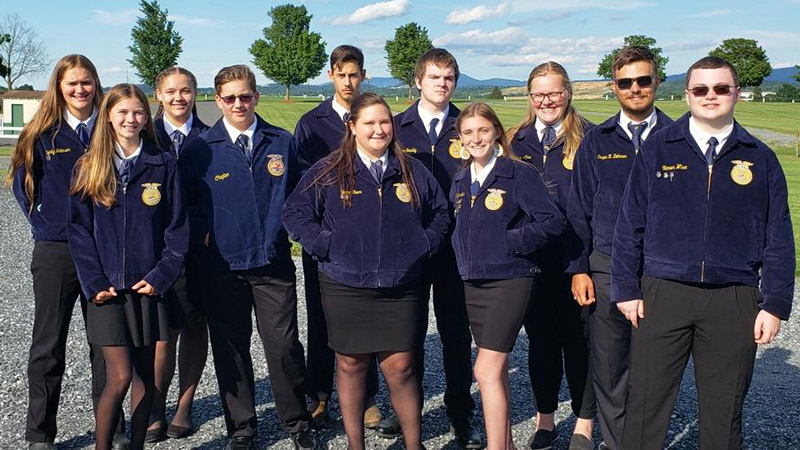 Typically, the convention is held at Virginia Tech, however, this year was slightly different.  Virtual sessions were held June 21, 22, and 24, and many state contests were held Wednesday, June 23, at the Rockingham County Fairgrounds.

Members were able to enjoy a workshop led by the National FFA President Doster Harper and fellowship with the association’s members.

Tanner Wise competed in the Employment Skills Contest where he placed fifth overall. Before attending in-person, he had to write a cover letter and resume for a job he is currently qualified for. On Wednesday, June 23, Tanner completed an interview with a panel of judges, a job application and then wrote a follow up letter.

Two individuals from the Buckingham Senior FFA Chapter competed in the Junior Division of the Horse Hippology Contest. Jenna Oliver placed second individually and Liberty Johnson placed third individually. They placed third as a team. Addie Baugher, of the Buckingham Middle FFA Chapter, also competed in the event and placed ninth overall. Contestants had to complete a written test about equipment, information about breeds and anatomy/physiology of a horse.  They also had to identify equipment used in the equine industry and judge classes of horses.

Buckingham also competed in the Veterinary Science Contest. Team members included Connor Bohanon, Shaylynn Elick and Trenton Snoddy. Members had to complete a written test on medical terminology and information in the veterinary field. They also had to identify various species of animals, equipment used in the veterinary industry and identify parasites before completing a math practicum. The team placed 13th overall.

Courtney Agee and Amiah Porter competed in the Nursery/Landscape Contest. Their contest consisted of; identifying plants, insects and tools, a written exam and landscaping design estimate. Agee placed sixth and Porter placed 10th individually. They placed fourth as a team.

The final two members who competed were Eli Bryant and Jordan Johnston. They competed in the Agricultural Mechanics Contest and placed 13th overall. Their contest included a written test, problem solving activity and welding activity.

Shaylynn Elick received her State FFA Degree that evening in Rockingham as well. The State FFA Degree is the fourth highest of the five degrees a FFA member may earn. Among other qualifications, members that receive the State FFA Degree must be a member of the FFA for the past 24 months and complete at least 360 hours of agricultural education.