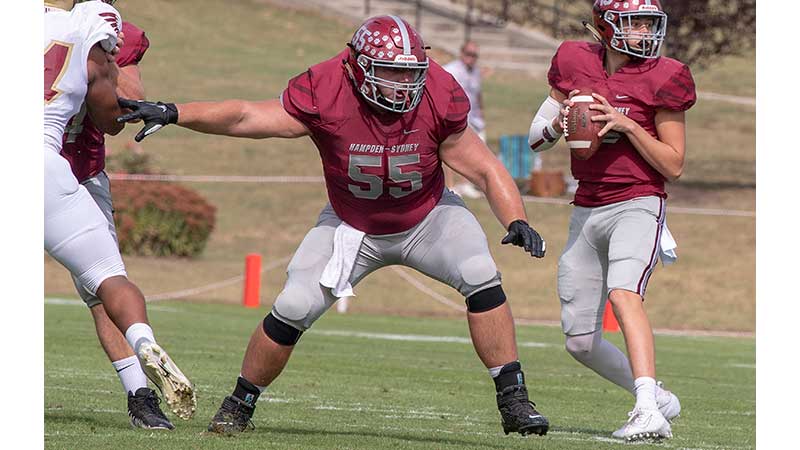 Hampden-Sydney College senior offensive lineman Tyler Howerton, No. 55, is a semifinalist for the 2020 William V. Campbell Trophy, which recognizes an individual as the absolute best football scholar-athlete in the nation for his combined academic success, football play and exemplary leadership. (Photo courtesy of Hampden-Sydney College Athletics)

Hampden-Sydney College offensive lineman Tyler Howerton of Alexandria has been named to the 2020-21 Academic All-District 5 Football First Team, as selected by the College Sports Information Directors of America (CoSIDA).

Howerton is a repeat First Team selection after earning the same distinction in 2019, when he was also named to the Academic All-America Division III Football First Team. 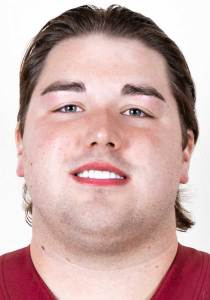 A physics major with a minor in mathematics, Howerton graduated from H-SC May 8 with a 4.0 grade point average and one of two class of 2021 valedictorians.

He was one of 12 finalists for the 2020 William V. Campbell Trophy-the first for Hampden-Sydney-largely regarded as the “Academic Heisman” as the premier scholar-athlete award at all levels of collegiate football. Howerton also received a 2020 Barry Goldwater Scholar (nation’s most prestigious scholarship in the natural sciences, mathematics, and engineering), H-SC’s first physics major to receive the award.

Howerton is a member of the 2021 National Football Foundation (NFF) & College Hall of Fame Hampshire Society. He is a recipient of the Hampden-Sydney President’s Award for Overall Academic Excellence, given to the senior at H-SC who stands highest in his class, and is a four-time winner of the H-SC Howell L. Gruver Award, given to the football player in each class with the highest GPA.

On the field, Howerton spent time at center, right guard, and left tackle while starting all 32 games in which he played over his Tiger career. Tyler was also named the recipient of the prestigious Harry G. “Doc” Jopson Scholar-Athlete Award for 2021 by the Old Dominion Athletic Conference (ODAC). He was also the 2020-21 ODAC/Virginia Farm Bureau Insurance Football Scholar-Athlete of the Year, earning First Team All-ODAC honors during the recent spring season.
Howerton is now eligible for voting consideration on the Academic All-America Division III Football Team to be announced July 14.

Tyler is the son of John and Nancy Howerton.