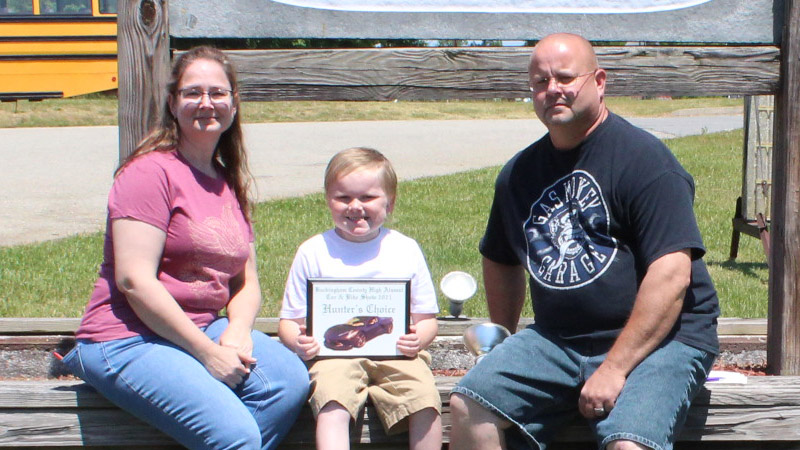 Jennifer Shumaker, left, and Travis Toney, right, organizers of the Buckingham County High School Alumni Car Show, pose with Hunter Hawk who holds his special Hunter’s Choice Award. Hawk was able to give the award to his favorite car of the day.

What started as an idea to honor Buckingham County High School classmates lost to cancer turned into an annual car show raising thousands for the American Cancer Society. A unique award given out this year made the event that much more special.

The Buckingham County High School Alumni Car Show was originally planned as a way for previous students to get together and commemorate classmates who had been affected by or passed away from cancer.

Originally held in 2014, what was supposed to be a one-time event has turned into a yearly occurrence. Although the show was canceled in 2020 due to the COVID-19 pandemic, Saturday, May 1, marked the Seventh Annual Buckingham County High School Alumni Car Show held at Teresa’s Place in Dillwyn.

The show, typically held in conjunction with the Relay for Life of Buckingham County, awards a variety of trophies in car classes from across several decades. Although a relay was not held this year, funds raised during the car show still totaled $2,331, all of which was donated to the American Cancer Society.

This year’s car show included a very special judge in the form of Hunter Hawk, a local 7-year-old who has bravely battled brain cancer for several years. For the 2021 show, organizers invited Hawk to give out a special “Hunter’s Choice Award” by bestowing a trophy for his favorite car at the show.

Hawk gave his award to a 2020 Corvette owned by Donald Vey.