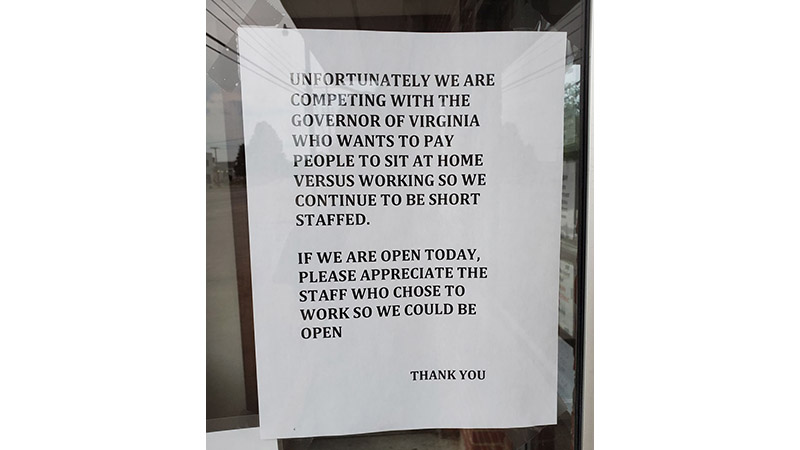 This sign on the door of the Cumberland Restaurant blames extra unemployment benefits for the current labor shortages in the food service industrry.

Labor shortages in and around the Town of Farmville have left some local restaurants with no choice but to reduce hours.

Establishments are understaffed, those who are coming to work are exhausted, and while some point their fingers at unemployment compensation as the culprit behind the crisis, experts believe post-pandemic capitalism is enforcing harsher competition in the labor pool.

“We’re actually so short-staffed we’re closing on Tuesdays,” she said.

Martin-Magin said Charley’s has had to close some days in order to give breaks to the staff members it does have and ensure workers aren’t often working six days in a row or double shifts.

She said the large worker shortage is something owners have never experienced before, adding that although Charley’s has put the call out on social media and other platforms that they’re hiring, applications have been slim to none.

Martin-Magin said she does believe extra unemployment benefits could have a hand in the worker shortage. Currently, qualified claimants in Virginia are eligible for $300 per week of Federal Pandemic Unemployment Compensation (FPUC) on top of the funds they already receive through regular unemployment compensation.

Charley’s is currently hiring for all positions now in both the front and back of house. Martin-Magin said current employees are feeling tired.

“We’re just trying to do the best we can and keep up with everything and make sure the employees that we do have don’t get overwhelmed,” she said.

The Cumberland Restaurant in Cumberland County has also found itself closing part of the week due to a severe worker shortage. Day Manager Cindy Leach said the restaurant was closed Saturday, May 22, because not enough workers were available to operate that day.

The eatery has had to close sporadically on certain days of the week for the last few months due to issues finding employees. The restaurant is now permanently closed on Mondays due to the shortage.

Leach said signs have been up advertising job openings, but the Cumberland Restaurant has only received two applications in the last three or four months. Two workers left in the last two weeks alone. With such a tiny staff, there’s often no one left to cover a shift when someone calls out.

Leach, who also works shifts as a server, also felt increased unemployment compensation could have a play in the worker drought.

“A lot of people would rather sit at home and get paid than go to work,” she said. “Hopefully things will start improving.”

Marilena Lentini, owner of Pinos Italian Restaurant & Pizzeria in Farmville, said the restaurant is just starting to recover from a very difficult labor shortage. Marilena experienced the worst of the shortage in the front of house with servers and hosts, and oftentimes the pizzeria was forced to move to takeout only on certain days of the week when not enough staff were available to wait tables.

Marilena, too, has wondered if unemployment benefits may be a factor in the shortage. In order to combat this, the restaurant owner increased wages for her hourly workers and decreased the number of servers working during a shift in hopes workers would go home with better tips.

While Pinos is finally seeing some new hires come in as of this week, Marilena said applications were almost nonexistent despite heavy advertising of job openings.

“We were all looking at each other like, ‘Oh my God, nobody’s applying at all,’” she said.

Jo said while he’s currently doing well in terms of staffing, he has great concerns about making sure he holds onto the workers he has. He believes the chances of finding new staff may be extremely slim.

“They’re just not out there.”

In Farmville, Jay Solorio, manager of La Parota, has similar concerns. Solorio said La Parota is currently doing well with its number of employees, but he’s noticed a severe drop in the number of individuals coming in to inquire about job openings.

Solorio echoed another theory heard nationwide regarding why workers have left the industry in such high numbers, citing the year has been unimaginably challenging for those in the food and hospitality field. He said those working in the front of house have had difficulty dealing with customers who can get upset or angry when approached by a worker about mask and social distancing requirements.

“I mean, nobody wants to be yelled at.”

Charles Thompson, owner of Uptown Coffee Cafe on Main Street in Farmville, said he experiences typical seasonal reductions in his labor force as college students go home for the summer. While he’s had no trouble replacing baristas or servers, finding help in the kitchen has been a bit more challenging.

“We had an interview lined up, and before I could meet with him, he got his $1,400 stimulus check and decided he could wait a few months,” Thompson said of a prospective hire.

On Thursday, Thompson said friends both in the restaurant and retail industries are experiencing worker shortages, noting there are often few discrepancies in the pay rates between the two fields. He said, unfortunately, he does feel a way to remedy the issue would be to eliminate the extra unemployment benefits through the FPUC, noting that while that money was needed at the beginning of the pandemic, it may now be hurting the economy.

A study released in late January by the National Restaurant Association shows workers are leaving the industry in record numbers.

Figures show the food and hospitality sector has lost 2.5 million workers since the pandemic. Sixty-two percent of fine dining operators and 54% of family and casual dining operators said staffing levels were more than 20% below normal, and there are nearly 2 million fewer 16- to 34-year-olds in the labor force, the “most prominent age cohort in the restaurant industry workforce” according to the association.

Current and past restaurant workers are citing a variety of causes they believe are to blame for the shortage.

Alyssa Barrell, 23, of Farmville, has been in the food industry since she was 17. She’s been a server, a hostess, and currently works as a delivery driver.

“The food industry is a hard line of work. It’s often long hours with no breaks. It’s also incredibly undervalued, and the pandemic really showcased that,” Barrell said.

Barrell believes many workers are feeling underpaid and undervalued and are having trouble justifying the work. Additionally, she’s noticed many of her peers have left the industry all together for office jobs.

“The food industry lacks a lot of important facets of a job that adults look for, including a consistent income, health insurance and paid time off. After the insurmountable amount of instability of the past year, it’s reasonable that people are moving on to jobs that provide stability while being treated and paid better.”

When working as a server, Barrell made $2.13 an hour and survived off tips, which she said didn’t always serve as a reliable form of income. Now, she believes the U.S. should do away with the current practice of tipping and offer servers a livable wage.

“To fix the shortage, I think food establishments are really going to have to cater to the worker,” she said. “They need to offer better pay and be transparent about both what they are paying and what an applicant can expect to make from tips. Breaks during long shifts need to be allowed and encouraged. Overall, after more than a year of being called essential and not treated as such, workers’ needs have to be treated as a priority if restaurants want to survive.”

Madison White, also 23, of Farmville, said she’s been working in restaurants since age 16 both as a front and back of house worker.

“The problem with working in restaurants right now is we’re overworked, understaffed and poorly managed,” White said. “People in this area don’t tip, and if they do tip it’s only about $2 on a $40-$50 bill.”

White said she too would like to see servers offered an hourly rate rather than tip-dependent pay.

“There is definitely a shortage of workers in this field, and it’s solely because we do not make enough for a living.”

Professor of Economics and Business at Hampden-Sydney College and labor economist Saranna Thornton says wages in the restaurant business are terribly low, and the labor shortages experienced in the area are a classic example of how labor markets work.

On Friday, Thornton said wages in retail businesses such as Walmart, Lowes, Target and Amazon are now several dollars an hour above those paid in fast food and sit-down restaurants.

Additionally, she said retail jobs are more likely to offer benefits, and as a result, workers are migrating to better job offers.

“Food businesses in the local area are discovering that there is competition for the labor pool but haven’t yet raised their wages enough to eliminate the labor shortage,” she said.

Thornton said while people often argue businesses can’t afford to raise wages, from 2009 to 2019 corporate profits (after taxes) have increased by 53.4%, while median weekly earnings of wage and salary workers only increased by 24%.