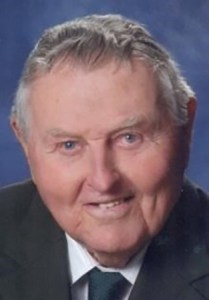 Willard Marcellus Lutz, 92 of Haubstadt, Indiana, passed away Friday, April 30, at his home. He was born in Haubstadt on May 8, 1928 to the late Orlando and Olga Lutz. Also preceding him in death was his brother, Robert Lutz and his three sisters, Velcia (Roger) Emmert, Mildred (Roy) Roethemeier and Mara Lee (Harold) Mossberger.

Willard worked in the plumbing and roofing business at Lutz Brothers, which was established in 1922 by his father and his uncle, Bill Lutz. Willard was the sole owner of the business for almost 50 years before passing it on to his sons.

Willard served in the U.S. Army during the Korean War as a water purifier. He was a longtime member of V.F.W. Post #2714 and American Legion Post #194, where he served many years on the burial detail.

He was a lifetime parishioner of Sts. Peter and Paul Catholic Church in Haubstadt. He was a member of K of C #2215 for 75 years and a member of Knights of St. John #345 for over 50 years.

He loved to play cards with his friends in those organizations. Willard loved sports. He excelled at basketball in high school. He became an avid golfer after playing for the first time in Japan while on R&R during the Korean War, and has two holes in one to his credit. He was an accomplished handicapper in horse racing and was a Cubs fan his whole life.

He also loved to sing! He sang for many weddings and funerals. For many years he sang in Barbershop quartets and chorus. He also cantered at Sts. Peter and Paul Church from grade school until he was 89, around 80 years! His voice will be a great addition to that heavenly chorus.

A Mass of Christian burial was held on what would have been his 93rd birthday at Sts. Peter and Paul Catholic Church. A mass will be said for Willard on June 11th at 9 a.m. at St. Theresa Catholic Church in Farmville.