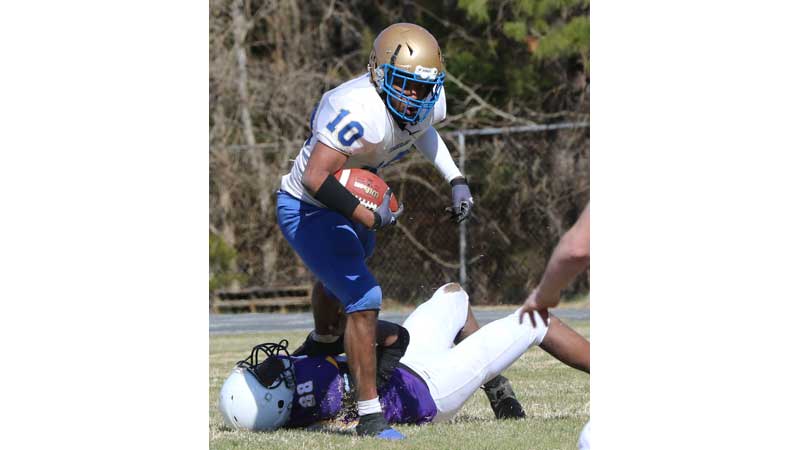 Cumberland County High School junior halfback Kai Gilliam recovered from an injury in the Dukes’ opener this season to resume his difference-making role. He ran for two 2-point conversions Friday, April 2, to help his team snap a 42-game losing streak that stretched back to 2016. (Photo by Titus Mohler)

The undermanned 2020-21 Cumberland County High School varsity football team had only a five-game season, but that was all it needed to make a profound and lasting impact on the school’s varsity football program.

After that program has endured an unbroken desert of losses that has stretched like a landscape across the last five years, the parting gift from this season’s valiant Dukes squad, which included four seniors, was an oasis of victory.

For the first time since September 2016, the Dukes were winners on the gridiron.

“It means a lot to me to come home and help build confidence and reinstill Duke pride in the football program,” first-year Cumberland Head Coach Kori Gilliam said after Friday’s game. “It was more for the kids than it was for me. To see the joy on their faces was the reason I came back.”

The Dukes went up 16-0 with 10:35 left in the game Friday and held the Panthers scoreless until only five minutes remained on the clock.

“The defense was stellar all game, with outstanding performances from Mo Fulani and Jaydon Pompey,” Gilliam said, referring to two seniors who were crucial to stopping the run, along with sophomore Travis Johnson. “Offensive standouts include the offensive line, and all three backs — Vincent Harris, Kyler Gilliam and Kai Gilliam — had stellar performances rushing the ball.”

Prior to Friday’s victory, the Dukes last won Sept. 16, 2016, when they defeated host King and Queen Central High School 61-6.

He said he was hoping to use this shortened season, which was delayed until now due to the COVID-19 pandemic, as a training opportunity that could hopefully generate interest among other Cumberland student-athletes for the upcoming fall season.

He agreed that one could not ask for a better way to promote the program ahead of the fall than by closing out the spring season as his players did Friday night.