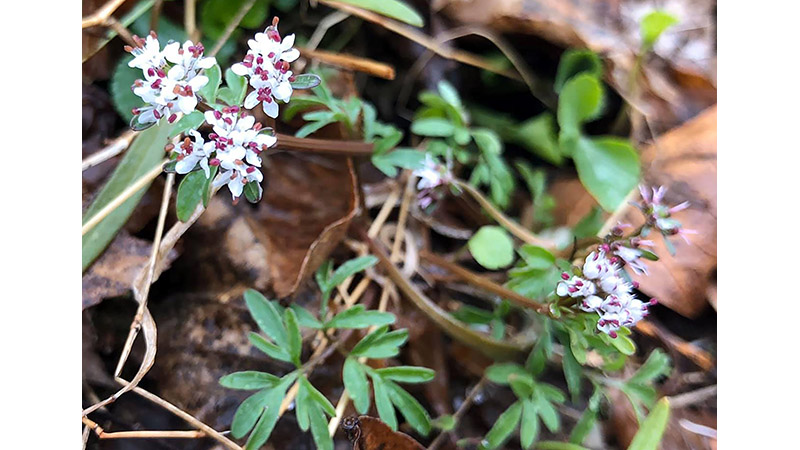 The anthers on this plant are still red but will soon turn black, giving the plant the appearance of salt and pepper.

While there are plenty of interesting plants in our area, sometimes I like to go hiking in an entirely different area, one known for having different species.

One such area is Edwards Landing Park, a relatively new park in Leesburg that has lots of nature trails, including one that goes down to the Potomac River.

I’ve been on a mission recently to find harbinger-of-spring (Erigenia bulbosa), a native member of the carrot/parsley family. It’s a diminutive, early spring ephemeral that is so small it barely rises above the leaf litter and often sprawls on it.

Harbinger-of-spring has one or more purplish stems with longitudinal ridges and alternate compound leaves. The stems end in compound umbels of white flowers, which are only a quarter inch in diameter. Each flower has five narrow white petals, five stamens and no sepals.

When the flowers open, the anthers of the stamens are dark red, but they turn black as the flowers mature. The striking appearance of the black anthers against the white petals gives the plant its second common name, salt-and-pepper plant.

Harbinger-of-spring is generally found in rich, well-drained floodplain forests and mesic slope deciduous forests. It’s not a common plant in Virginia, but is locally common along the Clinch, Potomac and Shenandoah rivers.

While I love wandering though my old familiar haunts, it’s always good to explore new territory. You just never know what you might find.