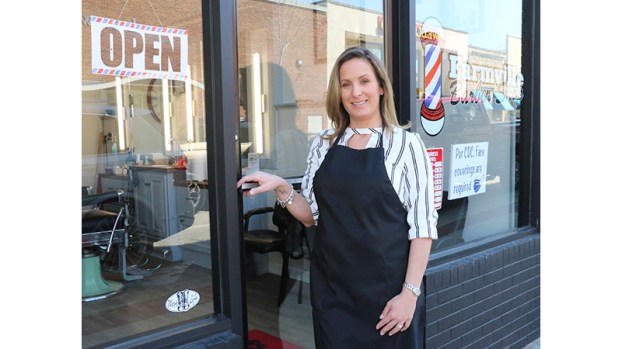 Summer Overton is the operator of the Farmville Barber Shop, located at 146 N. Main St. inside the iconic Doyne Building in downtown Farmville. 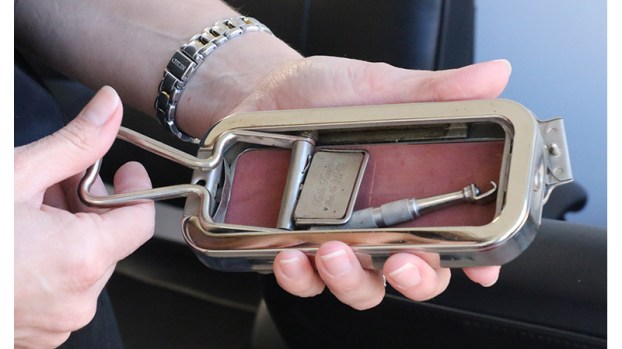 Summer Overton presents an Imperial Rolls Razor that would have been used at the Farmville Barber Shop many years ago. This razor is on display at the shop now and was a gift from former Town Manager Gerry Spates. (Photo by Titus Mohler) 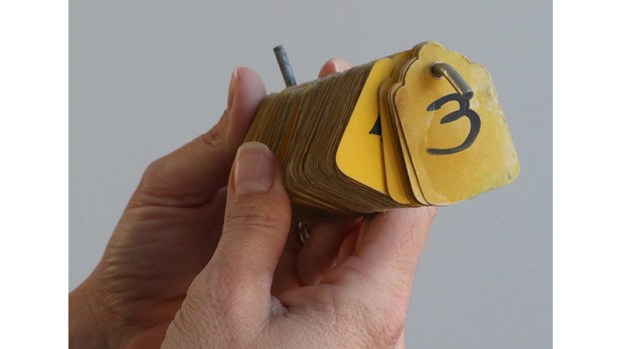 On display at the Farmville Barber Shop are the old number tags that customers used to take when they came in and were waiting behind people to receive service. (Photo by Titus Mohler) 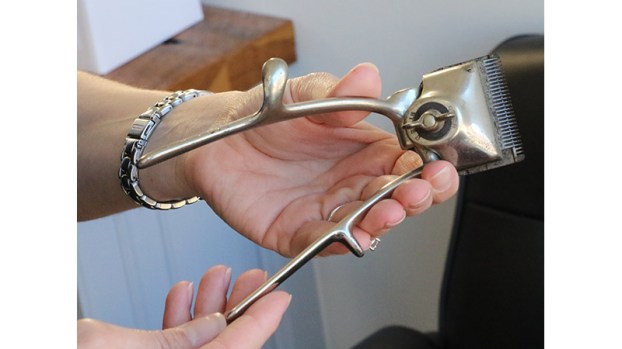 Also on display at the Farmville Barber Shop is this old hand clipper. Summer Overton briefly demonstrated its use, highlighting how strong a barber’s arms and hands had to be to operate it. (Photo by Titus Mohler) 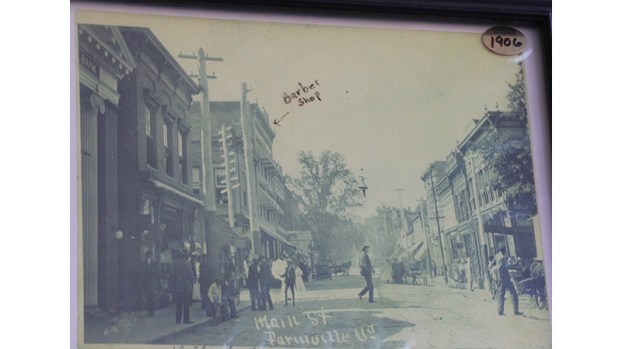 The Doyne Building is pointed out by a written note on the glass of the frame that says, “Barber Shop,” in this circa 1906 photo of Main Street in Farmville. This photo hangs in the Farmville Barber Shop currently. 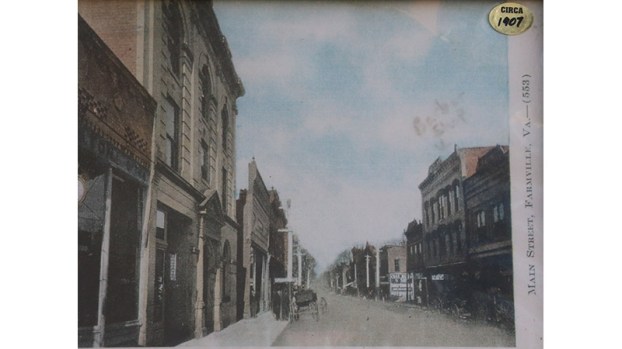 This circa 1907 photo of Main Street in Farmville hangs in the Farmville Barber Shop. A faint marking on the glass of the frame points out the location of the Doyne Building in which the barber shop is currently located. 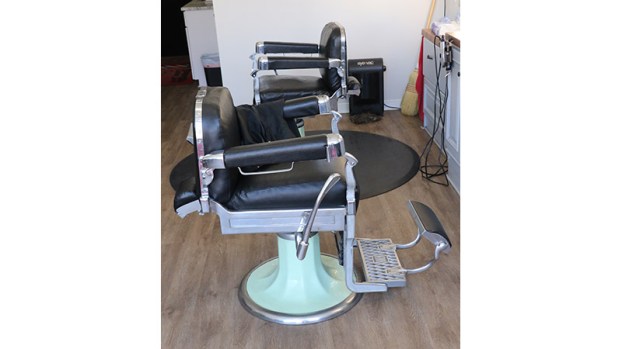 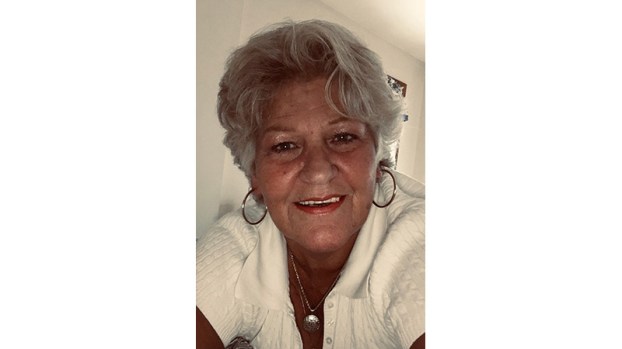 Robin Davis began working at the Farmville Barber Shop in 1994 and then purchased the business the next year. She remains the owner, and though back and foot issues have ultimately sidelined her from barber duties, if her health allowed, she said she would be back “right this minute.”

A tradition that may span more than a century endures in the iconic Doyne Building today with each cut of the scissors and each friendly conversation that accompanies it.

The Farmville Barber Shop has been an institution in the ground floor of the historic building on North Main Street in downtown Farmville.

Located at 146 N. Main St., the shop moved to the left side of the ground floor in March 2020 just before the COVID-19 pandemic hit.

“I know that when we were next door, we were the oldest business doing the same thing in the same location, and it had been here, they say, over a hundred years,” Farmville Barber Shop Operator Summer Overton said. “So I have older men that are (in their) 80s on, and they talk about coming in here when they were little.”

Pictures are on the wall from circa 1906 and 1907 with the Doyne Building prominently on display.

“You can see it was a barbershop back then,” Robin Davis said.

Davis is the current owner of the barbershop. She and her daughter, Overton, have been the caretakers of the Main Street barbershop tradition, keeping alive the business’ enduring appeal.

Davis pointed to Harry Yates and Jim McCormick as previous owners of the barbershop.

“They were both going to retire and close the barbershop, and my mom came in and bought it,” Overton said.

Davis said she almost did not do it.

“I was so afraid, (Farmville) being a small, country town, how they would take to a woman barber in there,” she said. But then she added that she heard Tanya Tucker, a popular country singer, say on the radio, “‘If you don’t go out on the limb, you’ll never get the good fruit.’ I made up my mind right there.”

She decided it was better to try and fail than to never try at all.

Davis worked at the barbershop for a year before buying the business from McCormick in 1995.

“He was my boss, and then when I bought the place from him, I became his boss, and he worked for me for about a year or two, but he only worked one day a week, which gave me that day off,” she said.

“I would stand on my feet straight all the way through,” she said. “We didn’t open till 7:30 in the morning, and I would get there at 10 of seven, and you would have five, six people standing outside waiting on you. So the minute I got there, I would start, and I would work sometimes till 8, 8:30 at night. Yeah, that was nonstop.”

She said she might get back for bathroom breaks, but she did not take a lunch break.

“I had back surgery, but I continued to work, and it ended up I had to have foot surgery, and that took me out,” she said.

“It was a lot of long hours,” she said. “I blew my back out, I blew my foot out, but today, I would go right back in it right this minute.”

She served as owner and operator of the Farmville Barber Shop for approximately 20 years.

Allowing her to rest now and keep the business going is her daughter.

Overton estimates she has operated the business for six or seven years, but she has worked at the barbershop for 20 years and been around it even longer.

“Honestly, I feel like I’ve been here since I was in diapers,” she said.

Overton oversaw the move from the right side of the Doyne Building’s ground floor to the left side after the building was sold.

She said clients were mourning the change, and both she and they were afraid the classic, old-school feel of the shop being lost.

“It was old, and we had to move in here, and we wanted to be able to keep the old-themed barbershop,” she said, noting that kind of barbershop is hard to find.

Though the space is new and nicely remodeled, classic elements remain, like the spinning barber’s pole outside and the old barber chairs and layout of the room inside.

“I like for the customers to feel homey, and I didn’t want them to come in and feel like it’s too modern and they can’t come in if their shoes are dirty,” Overton said. “A man’s business, they come in, they’re dirty, OK, I can clean that up. I don’t want to, and I might fuss about it, but you know.

“I think it was really important to be able to keep the business as, I don’t know if ‘old’ is the right word but to keep it as old-feeling and homey and welcoming as we could, because there were so many people that really enjoyed that feeling.”

Part of what contributes to the classic feel of the barbershop is the people inside it as well. Occasionally Overton will learn from a faithful client fun anecdotes about what has unfolded inside the business’ four walls in previous years.

Fun anecdotes are also born with first-time customers and college students who simply want to get their face shaved to see what it is like. Overton said some customers are also excited to get a neck shave.

Davis spoke with joy about the multi-generational nature of the shop’s clientele.

“We’ve got people that are in their 40s that came there when they were a kid, and now their kids are coming,” she said. “We’ve had college kids that graduated, whether it be Longwood or Hampden-Sydney, end up coming in, and they’re married now, and they have kids. They still come by and visit, which I think is so neat.”

She noted that she has said it a million times — ”I do have the best customers.

“They’re good, faithful, respectable customers, and I’d put them up against anybody’s customers because they are,” she added. “When I worked in a beauty shop, women would bring gifts in at Christmas and all that, and I was so surprised at Christmas when we got gifts, and even though I’m not working, I still get them. They don’t bring them in just for Summer. They’ll be like, ‘Here, give this to your mom.’”

Asked what the appeal of the Farmville Barber Shop is, Davis had three main things that came to mind.

“I would say a good haircut (and) being professional but yet welcoming at the same time.”

Friendly conversation is folded into the welcoming quality, helping make the customer feel at ease in a familiar place.

“It’s like going to your grandmother’s house and opening the icebox,” Davis said. “You feel comfortable.”