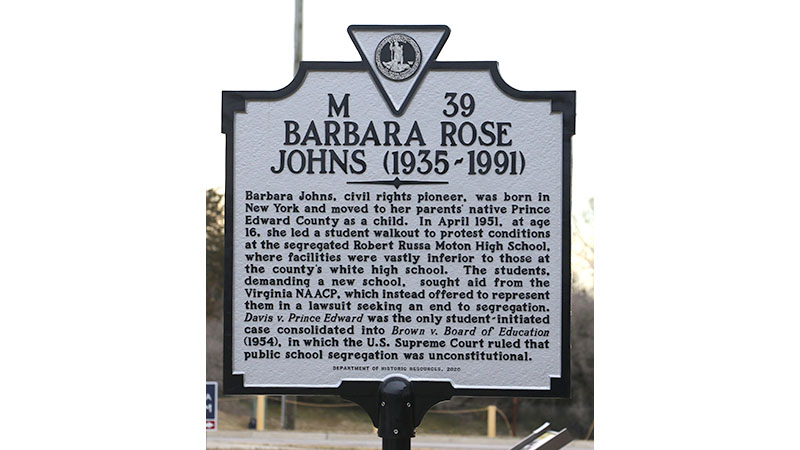 Local listeners and others from across the commonwealth celebrated and commemorated history Friday, April 23, during Moton Live, a 10-hour virtual celebration to honor the 70th anniversary of the 1951 student walkout of Robert Russa Moton High School led by Barbara Rose Johns.

The day-long, entirely virtual event also served to commemorate the 20th anniversary of the opening of the Robert Russa Moton Museum.

Streamed live via Youtube and Facebook, the day was packed with panels, musical performances and guest speakers and included a special message from Virginia Gov. Ralph Northam.

“When I think of Barbara Johns, I am reminded of how brave she was at such a young age,” Northam said. “As a teenager, she led a protest that defied segregation, challenging the barriers that she and her African American peers faced and ultimately helping to dismantle them. Barbara Johns once said the struggle for equal education seemed like reaching for the moon, but she never gave up. She pushed and pushed.”

It has been a huge year for the legacy of Johns and the 1951 walkout she led. In Dec. 2020, Johns was chosen to join George Washington as Virginia’s second representative in the National Statuary Hall Collection in the U.S. Capitol.

In February, Johns’ brave actions were honored with a Virginia historical highway marker installed in Farmville after more than 50 fourth graders at Laurel Ridge Elementary School in Fairfax submitted the idea as a part of Northam’s Black History Month Historical Marker Contest.

“Her persistence is an example for all of us,” Northam said of Johns. “That is how you make change. I am proud that Barbara Johns will soon represent Virginia in the U.S. Capital where her idealism, courage and conviction will continue to inspire Virginians and Americans to speak up and confront inequities in our society now and for generations to come.”

“Having this marker means so much for me and my family,” Joan Johns Cobbs, Moton student striker and sister of Johns, said. “We thank Barbara for having the courage and fearlessness and knowing there was injustice and deciding to do something about it.”