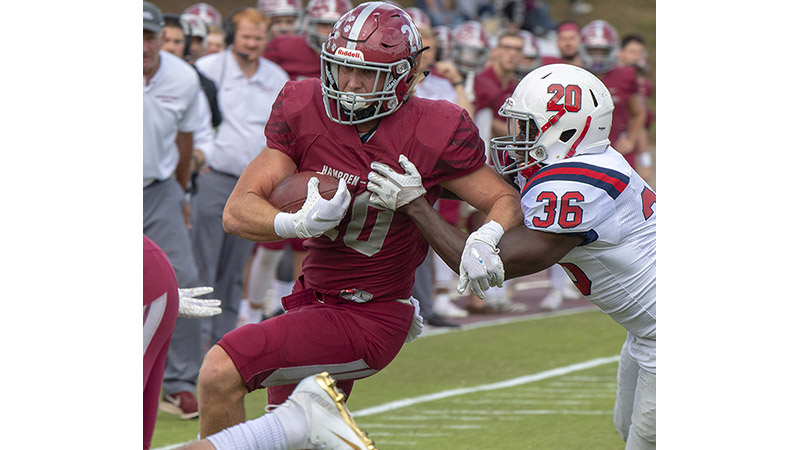 Hampden-Sydney College placed 11 student-athletes on the 2020-21 All-Old Dominion Athletic Conference (ODAC) Football Teams, including six first Team and five second Team selections, while senior offensive lineman Tyler Howerton of Alexandria was chosen as the ODAC Scholar-Athlete of the Year, and freshman defensive back Will Pickren of Mt Pleasant, South Carolina was picked as the ODAC Rookie of the Year.

Tyler Howerton, a team captain, started the final three games this spring after missing the first two, helping to anchor the offensive line from his left tackle position as the Tigers accounted for 1,772 yards of total offense in five games, including 819 yards rushing and 953 yards passing with 20 touchdowns. A two-time All-ODAC honoree, he has started all 32 games. Off the field, Howerton was named one of 12 finalists among all NCAA divisions and the NAIA for the 2020 William V. Campbell Trophy, and is a Goldwater Scholar-the college’s first-ever physics department recipient-a member of the 2021 National Football Foundation and College Hall of Fame (NFF) Hampshire Honor Society, the 2020 NFF National Scholar-Athlete Class, a 2019 Academic All-America Division III Football First Team honoree, the recipient of the President’s Award for Overall Academic Excellence, given to the senior at H-SC who stands highest in his class, and a three-time ODAC All-Academic Team member.

Will Pickren started all five games at a safety position and led the Tigers in tackles with 39, including 20 solo and 19 assists, with four tackles for loss, one interception and two pass breakups. He tied for sixth in the ODAC in interceptions, ranked seventh in tackles and tackles per game (7.6), while tied for 14th in pass breakups. The first-year standout delivered several big hits throughout the season, making his presence felt in all five games.

Brad Gholson started all five games, helping to anchor the offensive line from his right tackle position as the Tigers accounted for 1,772 yards of total offense in five games, including 819 yards rushing and 953 yards passing with 20 touchdowns. He allowed no sacks this spring and has started 22 of 24 career games.

Kaleb Smith started three of four games and accounted for 290 all-purpose yards, including 191 yards rushing and 99 yards receiving with three touchdowns. He had 36 rushing attempts with 5.3 yards per carry and three touchdowns along with 13 receptions. Smith was second in the ODAC in yards per carry, eighth in yards per game with 47.8 and ninth in rushing yards. A three-time All-ODAC honoree, he has started nine of 18 career games and has rushed for 1,155 career yards on 281 career carries with 12 career rushing touchdowns, adding 116 career receptions for 1,062 career receiving yards with four career receiving touchdowns.

Cole Becker started three of five games and rushed for 290 yards on 62 carries with two touchdowns, adding one reception for 12 yards. He was fifth in the ODAC in rushing yards, yards per game and yards per carry. Becker started six of 16 career games and rushed for 603 career yards on 146 career carries with four career rushing touchdowns, adding 10 career receptions for 54 career receiving yards.

Tanner Bernard started all five games and passed for 933 yards (72-119, 60.5%) and eight touchdowns, averaging 186.6 yards passing per game. He ranked second in ODAC passing yards, passing touchdowns and passing efficiency, third in yards per game and fourth in completion percentage.