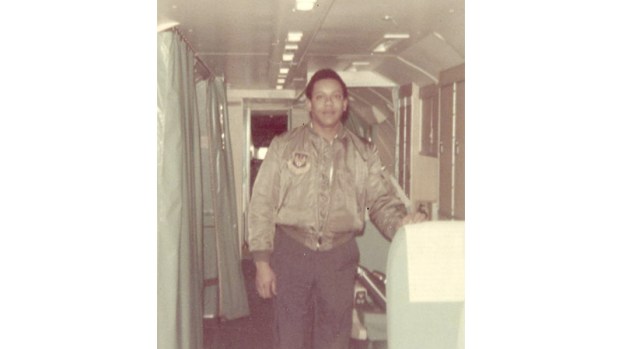 Retiring as a master sergeant, E-7, Robert “Bob” Hamlin trained for combat situations but served as a medic for his entire career in the Air Force. 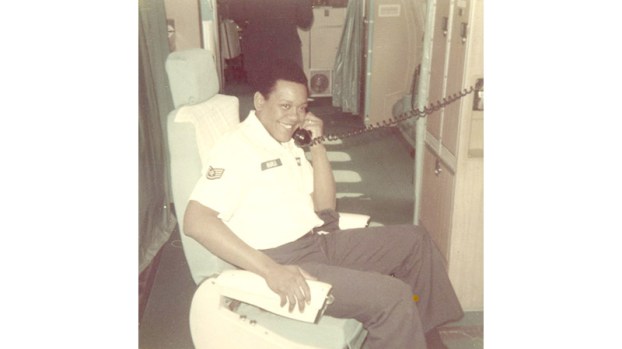 Robert “Bob” Hamlin is smiling while on the phone in this picture taken during his 20 years in the U.S. Air Force, which stretched from March 1964 to April 1984.

Robert “Bob” Hamlin faced significant adversity early in his life — times when options were closed off to him and pathways were dictated to him. But he persevered, making the most of those times by taking what positives he could find to help him successfully build a life for himself and his family.

Hamlin, who is African American, grew up in Prince Edward County, and he was going into the 12th grade in 1959 when the county’s public schools closed in opposition to desegregation.

He had to leave home to conclude his high school education.

“And then I went on to North Carolina College over in Durham. It is now North Carolina Central (University). But I didn’t get to stay. I had to leave school, and I went to work in Richmond at the Medical College of Virginia for a while.”

He had not yet had the opportunity to earn a bachelor’s degree before his life was again interrupted.

“In less than a year, I got a draft notification, and I really had no desire to go into the military,” he said. “I didn’t really know anything about the military, but I got this draft notice, and of course, my options were not great.”

He said he decided to check out the U.S. Air Force rather than to go to the Army.

“So I took the (Armed Services Vocational Aptitude Battery) ASVAB test and wound up in the Air Force,” he said. “And as it turned out, it was probably the better decision of my life.”

Hamlin said his time and experience in the military helped him tremendously in life.

“It gave us, me and my family, the opportunity to experience many places in the world,” he said. “I — and my wife did too — truly enjoyed moving around the world and experiencing other cultures. Often I would think back to where I came from. My home has always been out here in Rice, but to be in other places of the world and think back to, ‘My goodness, this is so much different than Rice.’”

He went to basic training at Lackland Air Force Base (AFB) in Texas. It was one of three different times he would find himself in Texas for training. Later in his career he returned for aeromedical evacuation training at Brooks AFB and then later for independent duty training at Sheppard AFB.

While Hamlin was never called to serve in active combat situations, he was trained extensively to be ready for them. He served as a medic throughout his military career.

After basic training, he went for further training in Montgomery, Alabama. Then came his first permanent duty assignment at Hunter Army Airfield in Savannah, Georgia. He was there for two years.

“And when I finished there, I left and went to Taiwan for 15 months,” he said. “I had just gotten married, had a young child, but I wasn’t able to take my wife and child with me to Taiwan. So I was gone for 15 months.”

He worked at an outpatient clinic while there.

“When I returned from Taiwan, I went to Pope Air Force Base in North Carolina,” he said. “It was adjacent to Fort Bragg Army Base, and I was assigned to an aeromedical evacuation unit designed to fly into forward combat zones to retrieve the injured. But we never had that mission.

“It was during the Vietnam era, but I never actually went to Vietnam,” he added.

He was at Pope AFB for four years.

“Then I went to Germany for four years to Rhein-Main Air Base and flew aeromedical evacuation in the European theater for four years,” Hamlin said. “So I was all over Europe — Spain, Italy, was even in North Africa, England, Norway, Turkey, Greece.”

After that, he came back to the states and served at Andrews AFB in Maryland.

“I was assigned as the noncommissioned officer in charge of the emergency room at Malcolm Grow (Medical Center),” he said, and he was there for two years.

He had further training as an independent duty medic in Texas, and then he noted he was sent back to Germany, but this time he was in Hessisch Oldendorf, which is in the north central part of the country, not far from Hanover.

He was there for three years, and his duties again involved travel, but this time he was not flying.

“I was now assigned to a field radar unit, and I was the only medic assigned to that unit to be with them in case of accidents, illness, taking care of sick calls, environmental health of the site,” he said. “And I would deploy with them whenever they would go someplace, like we would deploy to Denmark and other places.”

After his time there concluded, he returned to the U.S. and was assigned to Grissom AFB in Indiana.

“This was my final assignment in the Air Force, and I was there for the final three years until my retirement,” he said. “I was the noncommissioned officer in charge of the emergency room, again, when I first got there, and then I became the superintendent of nursing services.”

It was the second time in his military career that he had at least 24 people under his supervision.

Hamlin achieved the rank of master sergeant, E-7, by the time of his retirement.

He said having served the U.S. by being in the military is a point of pride for him, but it is also a point of making him kind of sad.

“Having spent 20 years in the Air Force, I am very prideful of that, very much proud of my military service,” he said. “But it does kind of anger me the way some individuals feel about me as a Black American and particularly those that have not served.”

If he had the opportunity to go back in time and had a choice of whether or not to join the military, Hamlin said he would choose to join.

Around the time of his retirement from the Air Force in Indiana in 1984, he was looking to go back to school.

The degree was in general studies with an emphasis in social behavioral science.

Hamlin said that in addition to gaining a lot from experiencing different cultures while in the military, being in the service also helped him to develop the kinds of skills that have really aided him greatly in life.

After earning his bachelor’s degree, he went to work for a company in Indiana for the next 12 1/2 years that helped people with employment training. He worked with youth and people that needed to improve their skills educationally.

When he returned to Virginia in 1999, he worked for a while for another nonprofit organization in consumer credit counseling.

“But then after two years of that, another opportunity came along in employment and training working with youth,” he said. “And so I worked for the Telamon Corporation, and I became the deputy state director for in-school and out-of-school youth for south central Virginia.”

Hamlin has also served within the Prince Edward community as chair of the board of directors for the Robert Russa Moton Museum.