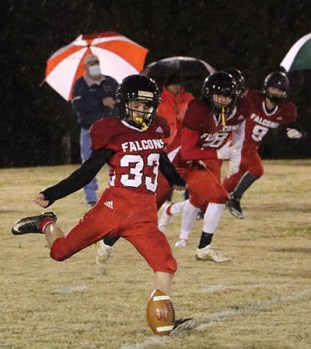 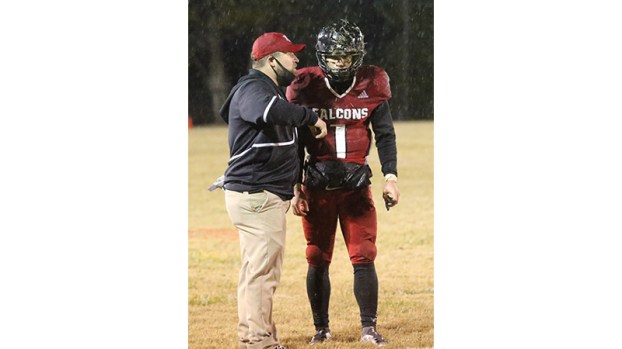 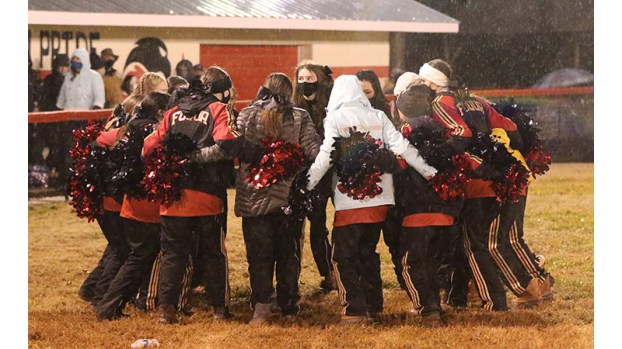 Fuqua cheerleaders circle up during a break in the action Friday night, Feb. 26. 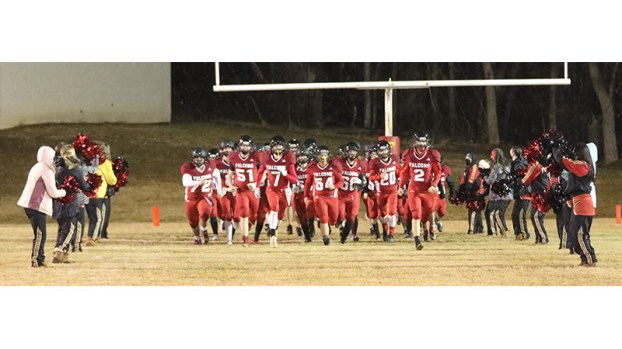 The 2020-21 Fuqua School varsity football team charges through a lane formed by the school’s cheerleaders just before the start of the season opener Friday, Feb. 26.

After a 15-month hiatus due to the COVID-19 pandemic, high school football returned to the Farmville area Friday night, Feb. 26, under some of the most unusual and challenging circumstances imaginable.

The gridiron action in this case was taking place at Fuqua School as the varsity Falcons hosted a defending champion eight-man football team from Roanoke Rapids, North Carolina — the Halifax Academy Vikings. The Vikings won 14-8.

First of all, it was so strange to be playing football in late February. Even under the best circumstances of a team advancing to the state championship game in the fall, Feb. 26 would be three months deep into the offseason.

Secondly, the weather was a significant factor. It was reminiscent of playoff weather, featuring the coldness that seems to crop up all of a sudden in mid-November when the stakes of the games are higher than ever. But this time, it might have been even colder as it was combined with rain that was enough to soak a variety of different jackets, and the rain led to many fumbles on the field by both teams.

“That is either the coldest or the second-coldest game I’ve ever been a part of — ever,” Fuqua Head Coach Ben Manis said.

He said he ended up giving his heavy jacket to one of the ball boys whose teeth were chattering at halftime.

Manis noted the players on the field weathered the cold better, able to move around and focus on the game.

Thirdly, the game was unusual because it was the first-ever eight-man game Fuqua’s varsity squad had ever played. The Falcons are used to the more traditional 11-man football in which there are 22 players at all times on a slightly wider field.

“It was just a very different feel for us on offense and on defense,” Manis said.

Fourthly, Fuqua entered the game with only seven or eight preseason practices and no scrimmages. Manis said his teams usually enter the regular season with at least 28 practices.

This led to some atypical situations, like a conversation overheard on the sideline between Manis and one of his players. Manis asked his player, “What happened to you on that ox?” The coach was referring to an animal code name for a play, and the player replied, “What’s an ox?”

The crowd was also more sparse than it likely would have been without COVID-19 regulations, though faithful fans were still on hand, spread out among the stands under umbrellas, with some standing along the sides.

One thing that did not change was the presence and spirit of the Fuqua cheer team, which cheered throughout the game and even put on a halftime show.

Despite the difficult and unusual circumstances of the football contest, it was apparent — and Manis affirmed — that the Falcons gave it their all, performing admirably.