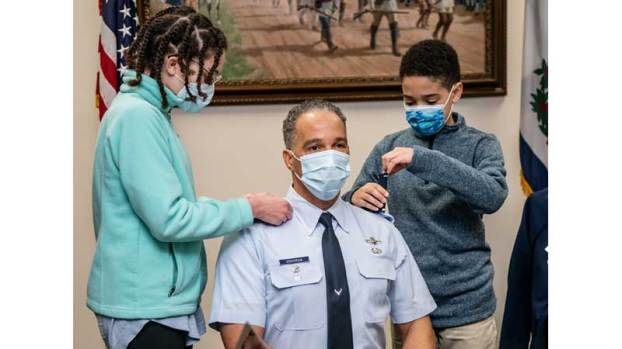 Brig. Gen. David Cochran is seated as his youngest children, Kiahn Cochran, left, and David Renzo Cochran, place his new epaulets with one star on the top of the shoulders of his uniform during the ceremony marking his promotion to the rank of brigadier general. 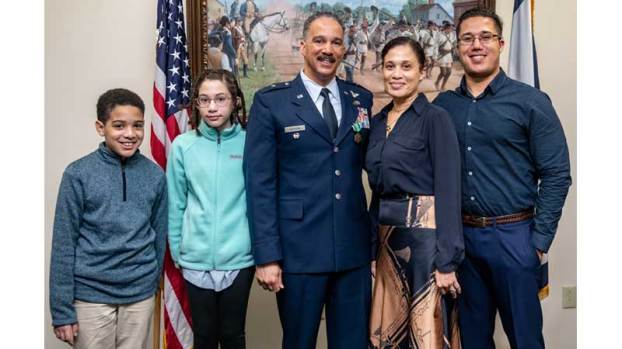 Brig. Gen. David Cochran stands for a photo with his family immediately after his promotion ceremony. Pictured are, from left, his son David Renzo Cochran, his daughter Kiahn Cochran, Brig. Gen. Cochran, his wife Grazina Cochran and his son GianCarlo Cochran. 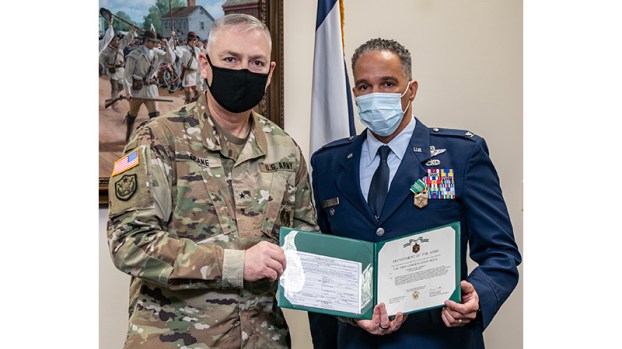 David Cochran, a 1985 Cumberland County High School graduate, was promoted Monday, March 1, to the rank of brigadier general in the U.S. Air Force and the West Virginia Air National Guard.

Graduating from the U.S. Air Force Academy in 1989, Cochran will have been in the Air Force and the Air National Guard for 32 years in May.

Brigadier general is the seventh rank that he has held during his time in the service after starting as a second lieutenant.

“It’s just another great opportunity to really continue to serve the nation and the state,” Cochran said of his latest promotion.

He noted he has never been overly ambitious, meaning that achieving this prestigious rank was not a goal he had in mind. But he added that he is one of those people that puts his nose to the grindstone and tries to be ready when opportunities present themselves — and they did.

“As I look back at it, though, I really have done all the prerequisites in my career to be really prepared to continue to serve at this level,” he said. “So that’s how I think about it. It’s just an opportunity to continue to do some good work and to serve.”

Cochran’s family was on hand in person for Monday’s ceremony, and more people were able to attend virtually, including some from his early years in Virginia.

“I was glad that Cumberland County was able to Zoom in,” he said. “But for the pandemic year, it would have been a different type of ceremony, and it probably wouldn’t have been streamed or anything.”

He said a few folks he had not heard from in a while were able to witness his promotion.

In terms of his military responsibilities, Cochran said they are all tied to his position, and his next position is slated to be assistant adjutant general for the West Virginia Air National Guard.

The nature of Cochran’s status as a member of both the Air Force and its reserve component, the Air National Guard, has set him up for a variety of opportunities.

He said the National Guard is a unique entity in that it serves the president and the governor.

In addition to these military roles, though, Cochran has also been free to occupy a notable civilian job.

“I think a lot of people don’t understand that you can pursue your civilian aspirations and still serve in a military uniform, whether it be with the National Guard or the reserve component,” he said, “and I’ve chosen to do that all these years too.

“So, my civilian job is United Airlines pilot, and my military job now is going to be brigadier general, still in the Air Force, with the West Virginia Air National Guard. It’s an awesome opportunity to make a difference.”