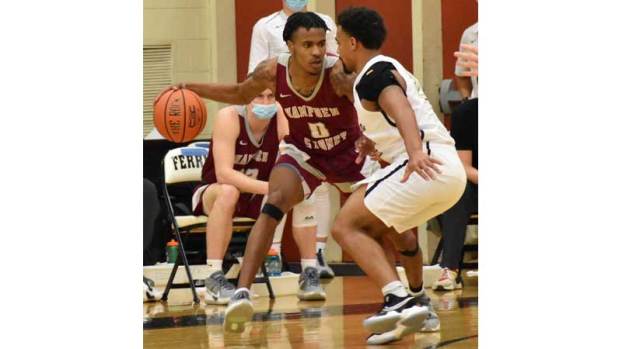 Freshman D.J. Wright added 13 points in his first collegiate start for the visiting Tigers (0-4, 0-3 ODAC), who trailed 45-30 at halftime before battling back in the second half behind a 17-0 run.

“We are not playing Tiger basketball right now, and that’s on me,” second-year Tigers Head Coach Caleb Kimbrough said. “We will keep working to get the kinks out. This team has a lot more to offer.”

H-SC started the contest well and took an early 10-7 advantage at the 15:37 mark after a jumper by freshman Josiah Hardy, also making his first collegiate start. The Tigers led 12-11 following a jumper off the bench from freshman Nathan Kania at 13:56.

Ferrum took its largest lead of the contest early in the second half at 53-33 with 16:21 remaining courtesy of another 3-pointer. H-SC, however, began battling back and put together a 17-0 run to close to within 53-50 at 6:54 after two free throws by Hardy. Five different Tigers contributed to the run, with Hardy scoring five points, senior captain Jake Hahn scoring four points, sophomore Chase Turner and Wright each hitting 3-pointers and Clements generating a steal and slam dunk that started the comeback.

The Panthers, however, responded with seven unanswered points to lead 60-50 with 4:34 left. The visitors were able to close to within 62-59 with 1:21 on the clock after another 3-pointer from Wright, but they could get no closer.

Clements led H-SC with his season-high 15 points, including 5-of-5 free throws, adding two assists. Wright finished with his 13 points for the Tigers, including 3-of-9 3-pointers, adding a game-high three steals. Hardy and Turner each contributed nine points, with Hardy adding a career-high seven rebounds and Turner adding a game-high three steals. Hahn and junior Jack Wyatt had eight points and seven points, respectively, with five rebounds apiece. H-SC shot 36% (22-of-61) from the field, including 21% (5-of-25) on 3-pointers, and 88% (14-of-16) at the free-throw line.

H-SC is scheduled to play its fifth consecutive game on the road at ODAC member Emory & Henry College on Friday, Feb. 5, at 5 p.m.