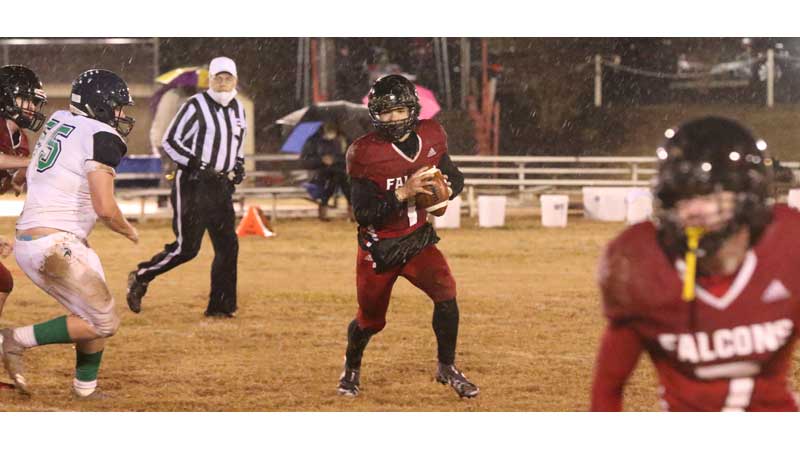 Fuqua School junior quarterback Nate Reed, center, flees a Halifax Academy lineman while looking for a target in the passing game, like senior slot receiver/running back Jackson Allen, in foreground. Reed ran for a touchdown and threw a 2-point conversion during the game, but the Falcons ultimately fell 14-8 in a cold, rainy opener Friday night, Feb. 26. (Photo by Titus Mohler)

After being held scoreless in the first half Friday night, Feb. 26, the Falcons took an 8-6 lead early in the third quarter and maintained it until the final minute of the game when the Vikings were able to score and then hold on for a 14-8 victory.

The rain had a notable impact on the game, with both teams fumbling the ball multiple times, in some cases leading to turnovers.

Halifax was able to get on the scoreboard first via a 1-yard quarterback sneak with 5:55 remaining in the first quarter. A 2-point conversion run failed, and the Vikings ended up taking their 6-0 lead into halftime.

Fuqua received the ball to start the second half, and Falcons junior quarterback Nate Reed, who transferred from Prince Edward County High School, ran for a 29-yard touchdown during the short drive. Then he completed a pass to sophomore wide receiver Matthew Pembelton for a 2-point conversion to give Fuqua an 8-6 lead with 9:57 still left in the third quarter.

The Falcons’ best opportunity to build on that lead came near the end of that quarter after their defense had forced the Vikings to punt. Sophomore wide receiver/quarterback Aaron Orange made an impressive return, advancing the ball to the Halifax 41-yard line.

Facing a fourth down later in the drive, Fuqua drew a pass interference penalty by the Vikings to reach their 30-yard line, but the Falcons were not able to turn the drive into points.

Reed became injured early in the fourth quarter and ended up leaving the game for good.

Fuqua struggled on offense but was still holding on to its 8-6 lead when Halifax regained possession of the ball on the Falcons’ 34-yard line with 3:14 to play.

The Vikings faced strong resistance but were able to work their way to the 1-yard line with their run game. They scored on a 1-yard run and then on a 2-point conversion run to make the score 14-8 with 39.4 seconds remaining.

The Falcons ended up receiving the ball at their own 49-yard line with 38.5 seconds left on the clock. Orange, who had taken over at quarterback for the injured Reed, kept Fuqua’s final drive alive with his legs, but he was not able to connect with any of his receivers on multiple pass attempts, and the Vikings held on for the win.

Next, the Falcons (0-1) will play Saturday, March 6, when they visit Greenbrier Christian Academy. The game has a 2 p.m. kickoff time.