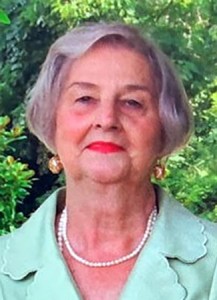 Barbara Knott Davis, 88 of Colonial Heights, passed away Monday, Feb. 1. Barbara was born in Danville on Dec. 7, 1932 to John and Louise Knott.

She lived most of her life in Buckingham County. Barbara was an active member of Maysville Presbyterian Church, was a Member of the Young Homemakers of Virginia, the Buckingham Historical Society and the Buckingham Book Club.

She was preceded in death by her husband, Henry Earl Davis, Sr.

Barbara moved to Hopewell in 2000 to be near her children and grandchildren. She became socially active in the Cobblestone Community where she played Mexican Train, was a member of the Bridge Club, was on the Social Community of the Cobblestone Association and loved going out to dine with her friends.

Prior to her decline in health, she attended the First Presbyterian Church of Hopewell. Barbara was an avid collector of vintage items and antiques, she loved a yard sale and going to a Thrift Store. Barbara loved to dress up, read, dance, knit, play cards, listen to music and entertain. She will be missed by her family and friends.

In lieu of flowers, monetary donations may be made to St. Jude Children’s Research Hospital, 501 St. Jude Place, Memphis, TN 38105. Services by Williams Funeral Home & Crematory of Lawrenceville, VA. Condolences may be expressed at www.williamsfuneralhomeva.com.