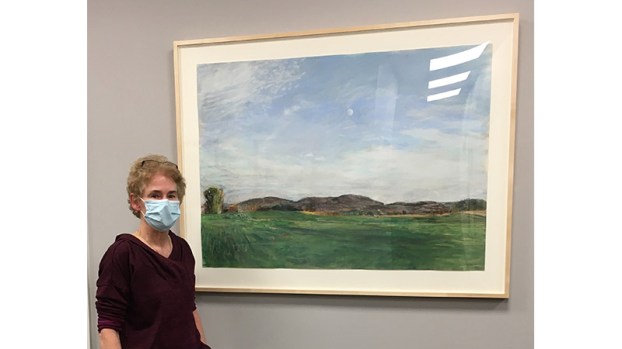 Barbara Arieti, secretary of the board of the Heart of Virginia Free Clinic, stands by the picture donated to the clinic by David Gibson from California.

The Heart of Virginia Free Clinic recently announced the gift of “Quaker Springs Toward the Hudson, #4”, a pastel on paper by noted San Francisco Bay Area artist David M. Gibson.

The expenses of framing and shipping from California were also donated by the artist. The quiet landscape was hung on the wall of the Free Clinic on December 9.

Gibson was educated at Grinnell College in Iowa and the San Francisco Art Institute, where he received his MFA. He has won numerous awards and residencies, and his work has received glowing reviews by art critics in the United States and Europe.

“We feel honored and blessed by this generous museum-quality work of art that now decorates our newly renovated home on Third Street and by the benevolent gifts that make our continued work possible,” Pat Payne, RN, executive director of the Heart of Virginia Free Clinic, said.

The Heart of Virginia Free Clinic, utilizing the talents of skilled medical volunteers, provides primary health care to uninsured citizens of Southside Virginia. In 2018, when it became clear that the clinic needed a new site, fundraising began in earnest. An anonymous donor gave the building, located at the intersection of Bridge and East Third Street, and renovations were paid for by the Mary Morton Parsons Foundation in Richmond and the Greater Lynchburg Community Foundation. In addition, donations in amounts from $5 to $20,000 were made by local residents. Regular operating expenses are covered by semiannual grants from the United Way of Prince Edward County as well as by gifts from numerous local counties, churches, civic clubs, businesses and individuals.

Nature provides its own valentines

According to the calendar, it’s the shortest month, but, in reality, it never seems to end. February is fickle. It... read more