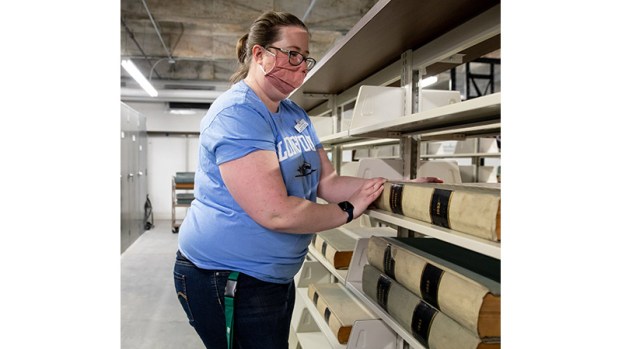 Greenwood Library Archives and Records Specialist Jamie Krogh helps with placement of the physical copies of The Farmville Herald in the library’s storage space designed for preservation of documents at Longwood University. (Photo by Courtney Vogel with Longwood University) 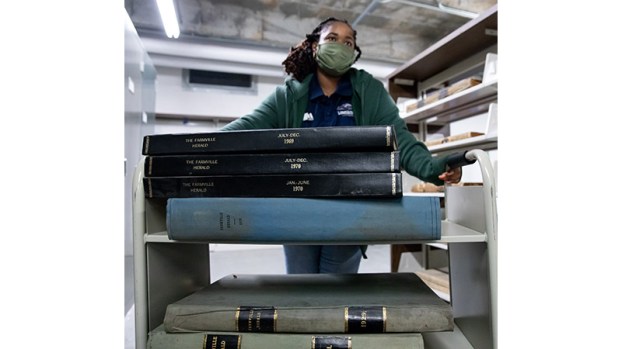 The history of the Farmville area is rife with important events that should not be forgotten. The Farmville Herald has reported on these events since 1890.

Journalism has been called “the first rough draft of history,” and a historic collaboration between Longwood University, the Library of Virginia and The Herald is helping preserve the “rough drafts” that have chronicled events in the town and beyond for more than 130 years.

Longwood’s Greenwood Library has agreed to store all the bound volumes containing physical copies of The Farmville Herald in its temperature- and humidity-controlled storage space to optimally preserve them and make them available to researchers. The volumes were moved there in October 2020.

Additionally, the Library of Virginia has agreed to digitize The Herald’s editions from the end of the 1800s to around 2015, which will allow readers to enter words or names in a search field and find them while reading the old editions online at www.VirginiaChronicle.com.

“I’m excited about the partnership with Longwood and the Library of Virginia and what it will mean for the community in preserving the history of our community and making it accessible,” Betty Ramsey, publisher of The Farmville Herald, said.

Dr. Brent Roberts, dean of Greenwood Library, said having the library be part of the archival project for The Herald means a lot.

“The partnership that we’ve forged between Greenwood Library and The Herald and the Library of Virginia makes available to students, faculty and other researchers a treasure trove of information about central and southside Virginia that is previously uncovered in the digitized newspapers,” he said.

He noted that there is a blank space in central and southside Virginia when it comes to access to historical editions of contemporary newspapers.

“Having The Farmville Herald available both in print as well as digital is really, really incredible,” he said. “It helps researchers of all kinds. We have a lot of those who study the history of civil rights, especially in our region, and so this will, I think, improve the study of civil rights, of Massive Resistance, and all those issues and how that occurred in our area, all the way down to people who are doing genealogical family history research.”

He said Greenwood receives a lot of calls from people searching for a relative’s obituary.

“Rather than scrolling endlessly through the microfilm, once it’s digitized we will be able to do very quick keyword searches for obituaries, and people will be able to do that themselves and find the information that they’re looking for,” Roberts said.

He explained that improvements were made to the library in 2018 and 2019 as the collaboration between Longwood, the Library of Virginia and The Herald was getting started.

“We upgraded our archival storage HVAC systems largely with the storage of The Herald in mind, because in order to preserve paper documents properly, they have to be kept at very specific ranges of humidity and temperature, and previously our HVAC wasn’t able to do that,” Roberts said. But now, with an upgraded system, we are able to preserve The Herald as well as all of our other archives related to Longwood and the larger community.”

Greenwood Library Archives and Records Specialist Jamie Krogh said she is still working with Farmville Newsmedia Director of Operations Staci Bridge to get digital editions of some issues after 2016, but all of the bound, print editions of The Herald, which start in 1902, are now at Greenwood.

Longwood noted The Herald archives from 1890-1902 only exist on microfilm.

As for preserving the print editions, Krogh said newspaper is very fragile.

“There’s not a whole lot you can do to treat it, so your best options are just to try and keep it in the best environment you possibly can, and that will help it last as long as possible,” she said.

The large volumes that had been stored vertically at The Herald office are now lying horizontally in Greenwood’s storage space.

“Large volumes like that, when they’re standing upright, their spines kind of start to bend and bow because of the weight, and so now they’re all flat and they can all, I like to say, relax,” Krogh said. “They don’t have to support themselves as much, so that will also help probably preserve them longer, a little less stress on them.”

Krogh said people wanting to search through the physical editions of The Herald need to contact library staff first.

“They could do that at the front desk, and someone would find Benedict (Chatelain) or I, so you do have to request access to them, but they are now accessible, and I’ve already started offering them to researchers who come in and ask about The Herald, and I’ve mentioned that we have the physical copies,” she said.

As for the digitization of The Herald’s early editions, Virginia Newspaper Project Director Errol Somay said it is in full swing. He noted editions up through about 1934 have now been digitized and are accessible at www.VirginiaChronicle.com.

“Brent Roberts was instrumental in making this happen because he served as the liaison with the publishers to grant us this permission,” Somay said. “That’s the difference-maker here is to have somebody there who could sell the idea of allowing us to digitize past 1925, so that was great.”

Microfilm is essential to this digitization project.

“It’s almost entirely a microfilm-to-digital conversion project, so that’s how we’re proceeding is digitizing from the film,” Somay said.

Briefly explaining the process, he said the film is scanned to get a good image in the form of a TIF file. With that file, derivative images are created, like JPGs or PDFs, because they are smaller and take less time to load on a computer screen. These derivative images are used for delivery to software that “reads” the newspaper, creating an optical character recognition (OCR) file.

Somay said attention to detail involves controlling how the software “reads” the pages so it stays with a particular story rather than reading across the page and mixing stories together.

The OCR file is what allows for people to type in keywords or names and search for them in old editions online.

Somay acknowledged the software’s ability to “read” is not perfect, but there is an option for people to make corrections, which creates an additional file with the changes.

The Library of Virginia has been eager to add The Herald to its collection, Somay indicated.

“A key part of the interest with The Farmville Herald for us and for scholars — I hate to say it — is Massive Resistance, so ’53 to ’65 and that period where you got from the (Brown v.) Board of Education through the reopening of schools — this is of national interest,” he said. “It’s local news in one way, but it’s also just a huge story, and so there’s no doubt that we were aching to get at that.

Expectations are that the digitization project will be complete in early 2021.