McMakin hit the game-winning trey directly in front of the Longwood bench and was immediately swarmed by her teammates and coaching staff, who made her the center of a dogpile celebrating Longwood’s third win in the past four games. The trey capped an end-of-game surge from McMakin, who scored Longwood’s last nine points in the game’s final 1:19 to pull the Lancers out of a 50-45 deficit.

The Big South’s No. 2 scorer, McMakin led all players with 17 points Sunday and scored 11 of those after halftime. Her game-winning triple capped off a monster run in the game’s final minutes in which Longwood held the Fighting Camels (6-5, 3-3 Big South) scoreless on six of their final seven possessions.

Just prior to McMakin’s game winner, her fellow sophomore, Anne-Hamilton LeRoy, performed her own heroics on the defensive end when she blocked Taya Bolden’s layup attempt with 13 seconds left. That rejection kept Campbell’s lead at 52-51 and set up the possession that ended in McMakin’s game-winning shot.

With the win, Longwood has now defeated the top two teams in the Big South preseason poll and is 3-1 against that group. The Lancers swept No. 2 Radford University in their Big South-opening series on Dec. 15-16 and split the two-game set against Campbell this weekend.

“Our women are so known for our fight, and to go up five and then down five, that puts a lot of pressure on a team,” Longwood Head Coach Rebecca Tillett said. “Our composure, our intensity towards winning — we had to get through an end-game situation together, and I thought we were really locked into that.

“As a coach, you just want your women to experience this as many times as possible. Kyla has the confidence to take that shot, and her teammates have it in her. You could tell from our angle it was going in the second it left her hands, so just to see them celebrate and love each other like that, that’s what we are trying to do — have joy and love each other.”

The win over the reigning Big South champion Fighting Camels is the Lancers’ first-ever victory in Gore Arena and their first win over Campbell since Feb. 17, 2018. Powering them to this win alongside McMakin was junior forward Akila Smith, who notched 13 points, eight rebounds, four steals and three blocks, and senior point guard Tra’Dayja Smith, who scored 12 points — including two huge threes in the fourth quarter. Tra’Dayja Smith also added four assists, two steals and a block.

Trailing 50-45 with just 3:27 remaining, McMakin led a 9-2 flurry to end the game, knocking down all three of her attempts from deep to push Longwood to a huge win. Off a feed from Tra’Dayja Smith, McMakin pulled Longwood within two with a deep ball with 1:17 remaining.

Following a Bolden layup, McMakin again connected from long range, this time drawing a foul to make it a one-point game, 52-51. With her team needing a defensive stop, LeRoy got her hand on Bolden’s shot attempt with 13 seconds remaining, and Longwood secured the rebound and called a timeout to set up McMakin’s first career game-winning shot.

The winner punctuated a strong shooting fourth quarter for the Lancers during which they knocked down 5-of- 8 attempts from 3-point range — three from McMakin and two from Tra’Dayja Smith.

“(Tra’Dayja) hitting big shots and us getting big stops on defense helped me want to elevate my level,” McMakin said. “I think that really helped me be able to hit those last shots because I wanted to make sure I do something to help my teammates. I had a lot of confidence going into that last one, and it definitely felt very good coming out of my hand.”

“I definitely felt a rush,” McMakin said in reference to her first career game-winning shot. “I actually can’t remember. I just remember feeling the excitement, and having my teammates jump on me was probably my favorite part, and the excitement that they had for me was just great.”

As with game one of the series, tight defense was the theme for both sides. Each team held the opposition to under 40% shooting from the field. The Lancers allowed just 107 total points across two games, as their defense held the Fighting Camels to just two points in the final two-and-a-half minutes.

“Coach Tillett had a great game plan against them, and just following the game plan helped us with that,” Tra’Dayja Smith said. “We were hungry for that win.” 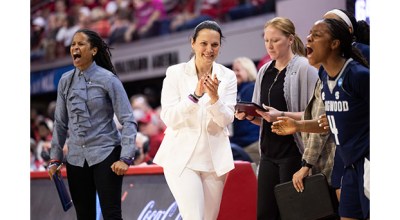 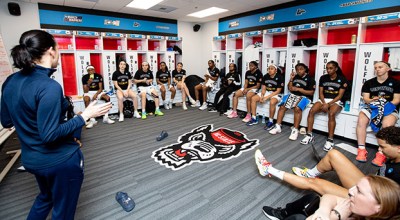 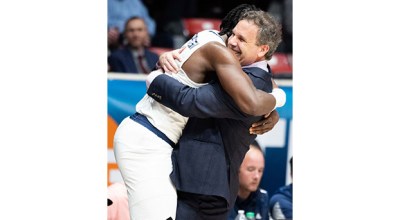