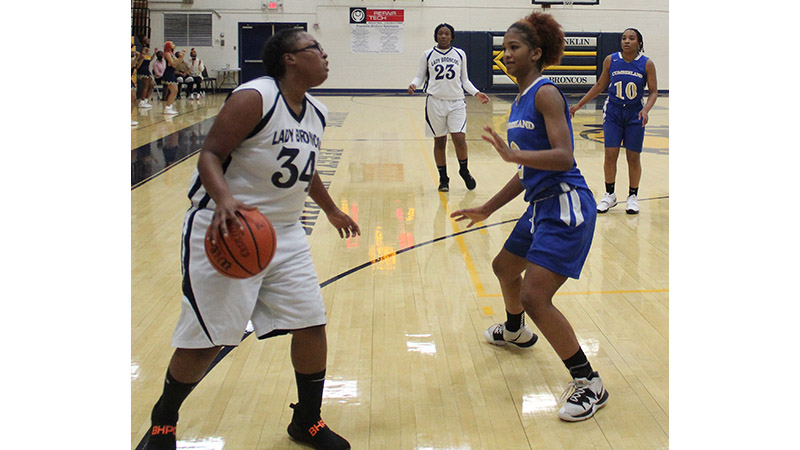 Janaia Trent and Allie Hurt are ready to intercept wherever Ja'Carra Whitehead is looking to pass the ball. In back, left to right, are Ariana Picot, Nalonda Henderson and Mia Ricks. (Photo by Stephen Cowles with The Tidewater News)

The Lady Broncos trailed only 25-15 to Cumberland at halftime on Monday, but the Lady Dukes went on to outscore their hosts 34-2 in the second half for a 59-17 season-opening victory.

Cumberland Head Coach John Trent was pleased with his team’s performance, particularly since the squad only had five players.

“I felt pretty good about it, but there’s some things we’ve still got to work on — passing, stop turning the ball over as much — and I think we’ll be fine,” he said.

“We’re hoping to recruit some more,” Trent said Wednesday, noting sophomore Cheyenne Crenshaw was in the process of joining the team.

Trent pointed out Franklin entered the game with only a week of practice and that a rematch later in the season would be a greater challenge for his team.

But additionally, he praised the play of Henderson and Janaia Trent.

“They locked down, and they started working good together in the second half for it to be the first game of the year,” he said.

“She did very well, and the lady she was playing against, she was kind of taller than her, but she kept the lady from scoring, so I’d like to credit Allie Hurt for great defense too,” Trent said.

“We’ve got a young basketball team, and we are pushing hard to do the best we can with the numbers we have,” Coach Trent said.