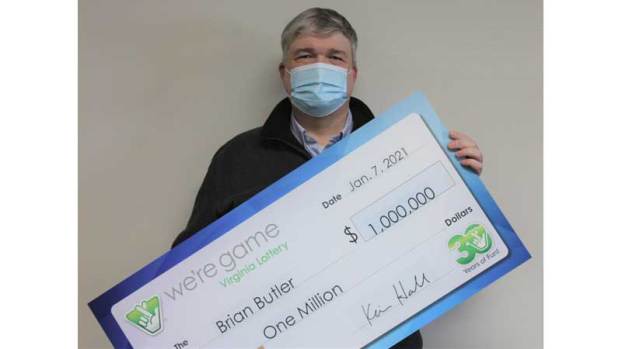 Brian Butler, of Farmville, holds up the check for $1 million he received after winning the $1 million prize in Virginia’s New Year’s Millionaire Raffle. He purchased the winning raffle ticket at Sheetz, located at 2016 S. Main St. in Farmville. (Photo courtesy of Virginia Lottery)

Brian Butler had not initially intended to buy a Virginia’s New Year’s Millionaire Raffle ticket, but he recently happened to stop by the Sheetz at 2016 S. Main St. in Farmville for gas and a drink, and that’s when he noticed the raffle tickets on sale.

“I just saw it pop up on the vending machine, so I bought one,” the Farmville man later told lottery officials.

A Virginia Lottery News release added that the ticket Butler bought — ticket No. 151989 — turned out to be one of four $1 million winning tickets announced on New Year’s Day.

He’s not the only winner. The store received $10,000 for selling the winning ticket.

The other three top prize-winning tickets in the Jan. 1 drawing were bought in Fredericksburg, Virginia Beach and Woodbridge.

A recent audit of the finances of the Town of Farmville and approved by the Town Council Wednesday, Jan. 13,... read more