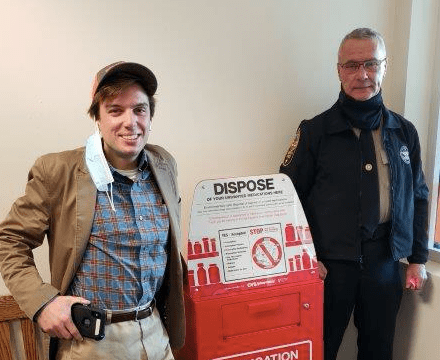 Citizens in Buckingham County have a new way to safely and discreetly dispose of unwanted prescription and over the counter medication.

A drug drop box located at the Buckingham County Sheriff’s Office is now available for use by county citizens.

According to Brent Uzdanovics, administrative lieutenant at the sheriff’s office, the drop box was made possible thanks to Sheriff Billy Kidd and District 4 Supervisor Thomas Jordan Miles III, who researched and corroborated together in order to provide a mechanism for residents to dispose of unwanted or expired medication.

Officials discovered a law enforcement grant available through CVS Pharmacy in partnership with Drugfree. org. Funding from the grant covers the cost of a medical disposal unit and its delivery to the local police department.

In order to qualify for the grant, a letter of support from the local government was needed.

In September of 2020 Miles presented the grant to the Buckingham County Board of Supervisors which unanimously voted to support the program, which reduces the likelihood of drug misuse/diversion, minimizes the chance for accidental poisoning and protects county streams and waterways from becoming contaminated.

Although the COVID-19 pandemic delayed delivery of the box, the drug collection program is underway and the box is now accessible in the main lobby of the sheriff’s office.

Thursday, Jan. 7, Uzdanovics noted this is the only drug drop box available in Buckingham County.

Miles added as the country is in the middle of an opioid epidemic, a program like this helps to get expired or unwanted medication out of the medicine cabinet and away from the hands of those who may be more likely to abuse or misuse prescription drugs.

Uzdanovics added the process for dropping off prescription drugs in the box is strictly confidential.