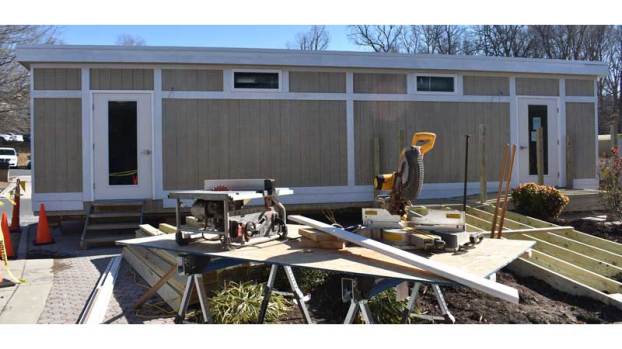 Centra officials say the modular unit currently being built outside of the Centra Southside Community Hospital emergency room will be up and running by Feb. 1. (Photo by Alexa Massey)

During the conference, Centra President and CEO Andy Mueller told listeners the health system had witnessed a small decline in the census of coronavirus patients at Lynchburg General Hospital over the past week.

According to Centra Vice President of Medical Affairs Dr. Chris Lewis, the hospital saw its highest number of COVID-19 patients to date last Wednesday, Jan. 13. Since then, COVID patient numbers at Lynchburg have dropped down to 92 as of Jan. 20, including 20 patients in the ICU, 14 of which are currently being ventilated.

Officials said Centra Southside Community Hospital in Farmville has hovered around 12 to 14 patients a day over the last week with no decline so far.

Lewis said while the decline in patients has taken some strain off of the health care system, it has also marked an increase in deaths.

On Wednesday, Mueller said while he’d love to be able to tell the public that Centra has a strong belief that the worst of the storm is behind it, he fears the recent surges in hospitalizations only signal the passing of the after-effects of Thanksgiving.

Mueller told listeners health care providers have observed cases seem to really increase dramatically five weeks after holidays, something which was observed following Memorial Day and Labor Day. He said he fears the true effects of the Christmas and New Year’s holidays may be yet to come.

“We expect February is going to be a really hard month on the health system and on our community,” he said.

Officials were excited Wednesday to announce new developments in the system’s immunization program.

According to Michael Elliot, senior vice president and chief transformation officer at Centra, as of Jan. 20 the Centra health system had collectively administered 9,010 doses of the COVID-19 vaccine.

Locally, he added, Southside has received a total of 1,000 first doses and 1,000 second doses.

On Wednesday, Southside CEO Tom Angelo said the hospital had as of Jan. 20 used 615 doses, including first- and second-round doses, to vaccinate 552 people.

“Once all 552 have received their second dose, we will have used all of the initial 1,000 doses,” he said. “We are vaccinating those people who have been prioritized by the Virginia Department of Health (Phase 1a) and continue to vaccinate on a regular basis. We received an additional 1,000 doses last week in an anticipation of the VDH opening 1b very soon.”

Elliot also addressed concerns surrounding the high demand of coronavirus vaccines around the country, remarking that referring to vaccine shipments as “unpredictable” would be an understatement.

Elliot said the state has relayed it anticipates Virginia will be receiving 100,000 doses of coronavirus vaccine each week, although the demand is two to three times that.

However, there appears to be no concern regarding the potential loss of any doses. Officials said Wednesday Centra has not lost a single dose in its vaccination process, and the shelf life of both the Pfizer and Moderna vaccines is said to be six months at proper storage temperatures.

Elliot shared some good news on Wednesday involving vaccination progression. According to Elliot, as central Virginia transitions into Phase 1b of vaccine distribution, the Centra Medical Group will now begin scheduling patients for COVID-19 vaccinations.

He said while up until Wednesday Centra has only performed vaccination at its hospitals, Jan. 20 marked the day in which workers will begin scheduling patients for vaccination at the Centra Medical primary care offices throughout the area, with the first shots expected to be going into arms by Friday, Jan. 22.

Elliot said due to limited supply of the vaccine only patients from Phases 1a and 1b who have an already established relationship with a primary care provider will be able to arrange for an appointment. Those patients can call Centra’s COVID hotline number at (434) 200-1225 to obtain additional information.

Officials noted Centra’s hospitals, including Southside, will continue to only vaccinate Phase 1a health care personnel at this time. As the number of daily new infections in Lynchburg and surrounding communities continues to surge higher than ever in the last few weeks, the hospital will not be offering Phase 1b vaccinations in order to minimize the number of visitors during this time.

On Wednesday officials also noted the Southside hospital’s modular unit is set to be up and running by Feb. 1. The small structure, located just outside of the emergency room entrance, will help take care of patients who need to be evaluated in an ER setting who may have COVID-19 symptoms or other respiratory issues.

Local COVID-19 data was nothing short of jaw-dropping this week, with humongous jumps in virus numbers reported both locally and... read more