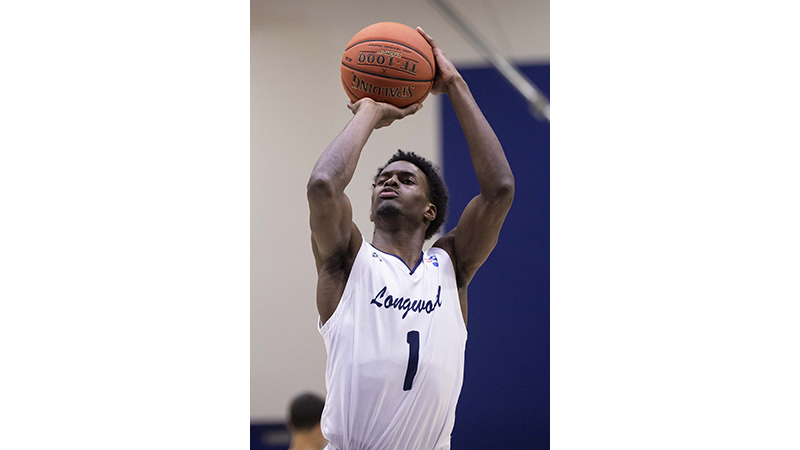 Collins entered the game coming off a 26-point performance against North Carolina Wesleyan three days prior and a 23-point game against Piedmont the day before and carried the Pride (1-2) once again with 24 points, two assists, a steal and a block Sunday. He was one of three double-figure scorers for Greensboro.

“This is an extremely disappointing one,” Aldrich said. “They understand it was a lack of discipline across the board. Greensboro, to their credit, played great, they made shots. My hat’s off to them. Their kids played yesterday, and they came back and competed.

“The problem is we didn’t play disciplined basketball at all. You saw that throughout the first half — we play a great defensive possession, and then we forget to box out, (Greensboro’s Matthew Brown) goes in and either gets a rebound or knocks it down, and then we get called for a foul.”

Facing a shorthanded Longwood team without key guards Heru Bligen, Jermaine Drewey and DeShaun Wade, Greensboro had its best shooting night of the season, sinking 47.3% (26-of-55) of its shots from the field, including a 9-of-17 performance from Collins and a 6-of-10 night from Brown.

Collins opened the game with 18 points in the first half, including a personal 10-0 run by himself in the final minutes before halftime. He finished the opening half 7-of-14 from the field to send Greensboro into the locker room with a 32-26 halftime lead.

The Lancers (0-3) responded with a 12-0 run of their own out of the break and jumped back on top 38-32, thanks in large part to the point guard duo of freshman Justin Hill and redshirt junior Juan Munoz, which scored all 12 of those points. However, after the Pride fought back and reclaimed the lead on a go-ahead 3-pointer from Collins at 15:34, the teams went back-and-forth and tied the score four times the rest of the way.

Brown took over the scoring load from Collins in the game’s final 2:37, scoring Greensboro’s final six points to overcome a 64-61 Longwood lead. His go-ahead jumper with 36 seconds remaining erased a 64-63 Longwood lead and came as part of a game-ending 8-0 run that put the Pride ahead for good.

“If you do not respect the details of the game, then those that do will be rewarded. In the first half we didn’t respect it,” Aldrich, whose Lancers entered the game 18-11 in Willett Hall during his three-year tenure, said.

“Really, across the board we gave them confidence by not executing. I’ve never seen so many shot-clock violations in the first half, but then we would have a breakdown. We’d have a breakdown in defensive transition. I don’t know what to say, but they’re not talking on defense. These are just the details of the game. Yes, it’s a young team, and these are lessons that need to be learned, but I’m not going to bail us out, not tonight or any night, (by blaming youth and inexperience).”

“Do I think this is the end of the world? Absolutely not,” Aldrich said. “It’s early in the season, it’s early for these guys. We’re struggling to find rotations and things like that, obviously, but these are lessons. If you can’t understand now that we have to execute and be supremely focused urgently on the details, I don’t know what to tell you.”