Serving it Up — A healthful Hertzler favorite 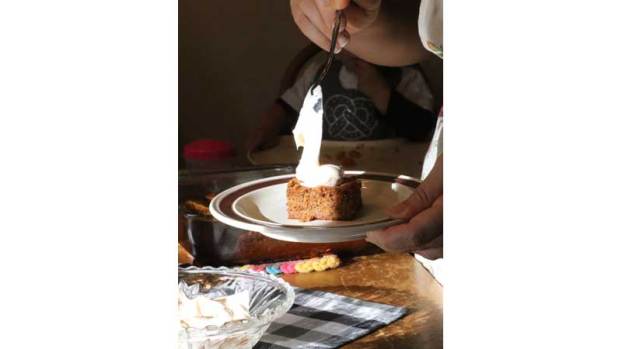 Michelle Hertzler applies the icing to the individual pieces of the Flourless Pumpkin Cake as she serves it to her family. 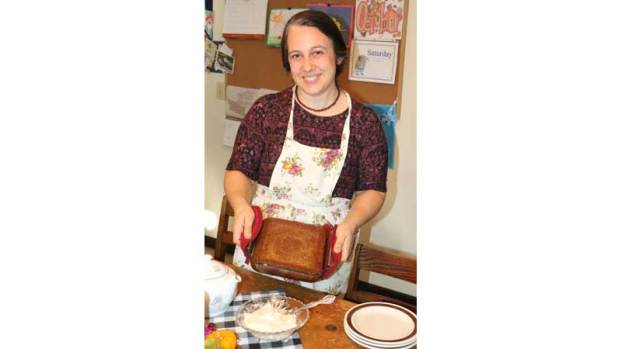 Story and photos by Titus Mohler

Michelle Hertzler grew up learning a skill that would allow her to shape something that affects all of her life — what she and her family eat.

She got her start in the kitchen under the tutelage of her mother, Helen Hertzler.

“I was the oldest of six children, so I did a lot of things in the kitchen,” Michelle said. “My next younger sister loved to do things outside. I preferred inside chores, so I got a lot more of that, although all of my siblings love to cook.

“So that was something that definitely my mother gave us — lots of good food and lots of time in the kitchen helping her and then the ability to cook (by) ourselves as we went to our own homes and things.”

There were about six years that Michelle worked outside the home between high school and getting married, and during this time, she noted she did not cook as consistently.

However, to her surprise, her skills were called upon at work in her role as housekeeper at the Longwood University president’s house. The president at the time was Patrick Finnegan.

“I cooked for the president and Mrs. Finnegan when they were at Longwood,” she said. “They asked me in the interview for working there if I was comfortable cooking at all.”

Later after Michelle got married and started a family, it again became clear her mother had set her up for success by teaching her how to cook.

“I had my basics,” she said. “I knew what to do. I could find my way around the kitchen, and the longer I was a mother and a wife, I realized how much I just need to make my own food to, a lot of times, get the result that I want. So it’s been good.”

Michelle did not necessarily learn how to make every single dish imaginable while growing up, but she was put in a good position to be a versatile cook.

“There’s definitely things I haven’t tried that you would know how to do going through a culinary school or something, probably, but I was definitely exposed to the appreciation for a lot of different kinds of foods and maybe even the basic idea of how to make them,” she said.

While cooking has been a practical activity for Michelle — the work of feeding her family — it is also something that, in general, she enjoys doing. That enjoyment comes particularly when she is able to dedicate focus to the activity instead of doing it while juggling a host of other responsibilities.

The ability to be creative with something important — to improvise and to adjust recipes to produce something even more palatable — is part of why Michelle enjoys the work she does in the kitchen.

“I make a lot of soup, and I don’t usually follow a recipe,” she said. “So that is a nice thing and the fact that it’s something that really affects all of life — it seems like a very small thing, but what you eat really does matter. And if someone is hungry, they don’t work as well.”

She points to soup as one of her favorite things to make, highlighting cream of tomato soup as an example.

“I really do like making soup, and I love eating soup,” she said, noting it’s a budget-friendly menu item too. “If you look into eating traditionally for health reasons, soups are really nourishing.”

Michelle said another thing her mother introduced her to was the idea of trying to make foods that were healthy.

“The idea of cooking from scratch, of knowing exactly what’s in your food, I feel like she gave me that appreciation, originally, for sure,” Michelle said of her mother. “And then it was a lot easier for me to take that further with my own family and even my own health and things like that.”

“I came across it because I was on a specific diet that I couldn’t have any kind of grains,” Michelle said.

She Googled flourless pumpkin cake about two years ago, and Gilmore’s recipe is one of the ones that came up.

The bars, which Michelle makes as a cake, have since become a big hit with her family — a triumph of flavor and healthiness.

• Preheat oven to 350 F and grease an 8-by-8-inch pan generously with coconut oil or butter.

• Combine all of the ingredients in a medium bowl, and mix well until a smooth batter forms.

• Transfer the batter to the greased pan, and bake at 350 F for about 30 minutes, until the edges are golden brown and the center is firm.

• Allow to cool completely in the pan, then cut and serve.

• These bars are delicious on their own, but if you’re aiming to impress, glaze these bars with my Maple Pecan Glaze. (recipe posted separately)

• I have tested this recipe with flax eggs and aquafaba as an egg substitute, and both results were terrible. It’s tricky trying to replace eggs in flourless baked goods. I’d recommend trying my Gluten- Free Vegan Pumpkin Bread or Vegan Pumpkin Donuts baked in a square pan if you need a vegan pumpkin bar.

• If you’d prefer to not use honey, I’ve made these bars with 2/3 cup coconut sugar with excellent results. I imagine that 1/2 cup of maple syrup could also be used instead.