Promise amid an 0-2 start 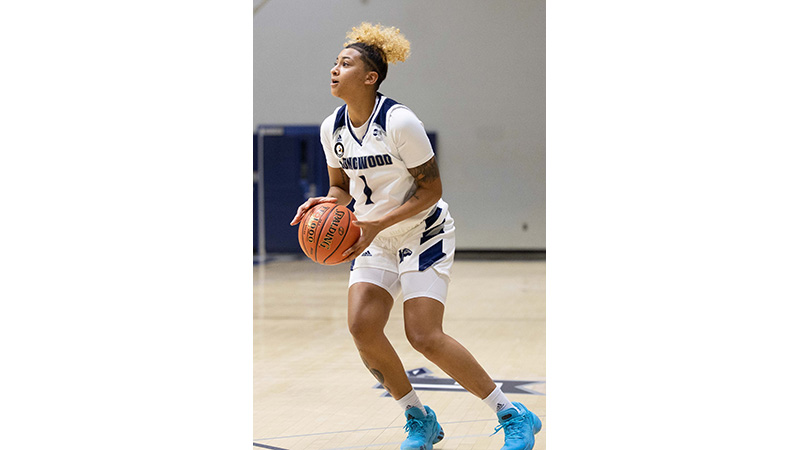 Longwood University’s women’s basketball team has gone 0-2 through its first two games of the 2020-21 season, but the Lancers still gave fans plenty of reasons to be excited.

Then Saturday afternoon, Nov. 28, offense was tough to come by against a pair of stout defenses in a slugfest between East Tennessee State University (ETSU) and Longwood. The two defenses combined to force 55 turnovers, but the Buccaneers (1-0) used a late 9-0 run to push past Longwood and win 62-56.

Jakhyia Davis keyed the late run for the Bucs with six points that helped ETSU turn a two-point deficit into a 58-51 lead with 1:36 to play. In her freshman debut, Davis hit big shots while posting a team-best 13 points. She added five boards and two assists as part of a Buccaneer attack that featured five players who scored at least seven points.

The spread attack coupled with a stingy defense held Longwood to 30% shooting from the floor, and it was enough to overcome Longwood’s own stingy defense and three-headed attack.

“ETSU had a good game plan,” Rebecca Tillett, the third-year head coach at Longwood, said. “They were really physical. They had some women really step up for them, which is what you want, right? People game plan for your top scorers, and then you want other women to step up and take their opportunities, so I thought they did a good job of that.”

For the Lancers, sophomore guard Anne-Hamilton LeRoy led the charge late as the Lancers battled back after having an early lead erased. A Big South All-Freshman team selection a year ago, LeRoy poured in the team’s final 12 points in a furious fourth-quarter finish and finished with a game-high 16 points to go with a career-best four steals.

“I thought she was just really focused,” Tillett said of LeRoy. “I remember having a conversation with her over on the side about something defensively, and I said, ‘We’ve got to make a run here, it’s got to be now.’ She’s like, ‘I’m ready.’ And you love to hear that from your players, somebody that’s ready to go, and so she got going a little bit, we called a few plays for her, and she really executed well down the stretch.”

“It gives us energy to see her going off like that, going to the basket,” Smith said, who added a double-double of her own with 14 points and 13 rebounds, her second in as many games. “That’s something that she’s really good at, and when she does it for us, it just gives the whole team energy.”

Smith and senior point guard Tra’Dayja Smith gave Longwood an energetic jolt at the start of the game, as the Lancer defense forced 11 turnovers in the first quarter on the way to building an early lead.

For her performance across Longwood’s two opening games, Akila Smith was named Big South Player of the Week.

The Lancer defense stayed locked in and forced 32 turnovers, the most in a game in the team’s three seasons under Tillett. Tra’Dayja Smith, who was selected to the preseason watch list for the prestigious Lieberman Award, finished with a career-high five steals while also adding 14 points and six rebounds. LeRoy added four steals of her own, also a career high, and Akila Smith had three steals in addition to her double-double.

“We took a step forward defensively, which was really important to us, in response to Duke and in response to last season,” Tillett said. “I think there’s some progress there. I think we’ve got some things we’ve got to fix together offensively. We’re just trying to rush stuff. We’re trying to get stuff a little bit quicker than what we want and what we execute in practice, and it was good to hear our women say that in the locker room — ‘We’re not doing what we’re doing in practice, and we want to show what we do in practice to everybody else.’ I think we have to get better at that.”

With ETSU’s stingy defense holding Longwood to 30% shooting from the floor, the Lancers hit the glass hard, led by Akila Smith. Of her 13 rebounds, a career-best 10 were on the offensive glass as the Lancers combined to grab 21 offensive rebounds. On a night where every bucket was precious, this led to 13 second-chance points.

Yet it was a balanced ETSU attack — with five players posting at least seven points — that made two critical 9-0 runs after halftime. The first came in the third quarter when junior guard Kaia Upton poured in five points in a 17-second span to give ETSU its first lead of the game.

After ETSU’s Mykia Dowdell pushed the lead to 40-33 late in the third quarter, LeRoy stemmed the tide, and the Lancers went on a run. Akila Smith evened the score at 40 after a steal and score, but Davis answered for ETSU to give the Bucs a 43-40 lead heading into the final frame.

LeRoy stayed in attack mode throughout the fourth quarter as the two teams traded buckets. After LeRoy attacked off the bounce for a driving layup that gave Longwood a 51-49 lead with 4:48 to go, Davis answered with an offensive rebound that led to free throws, jumpstarting ETSU’s game-sealing run.